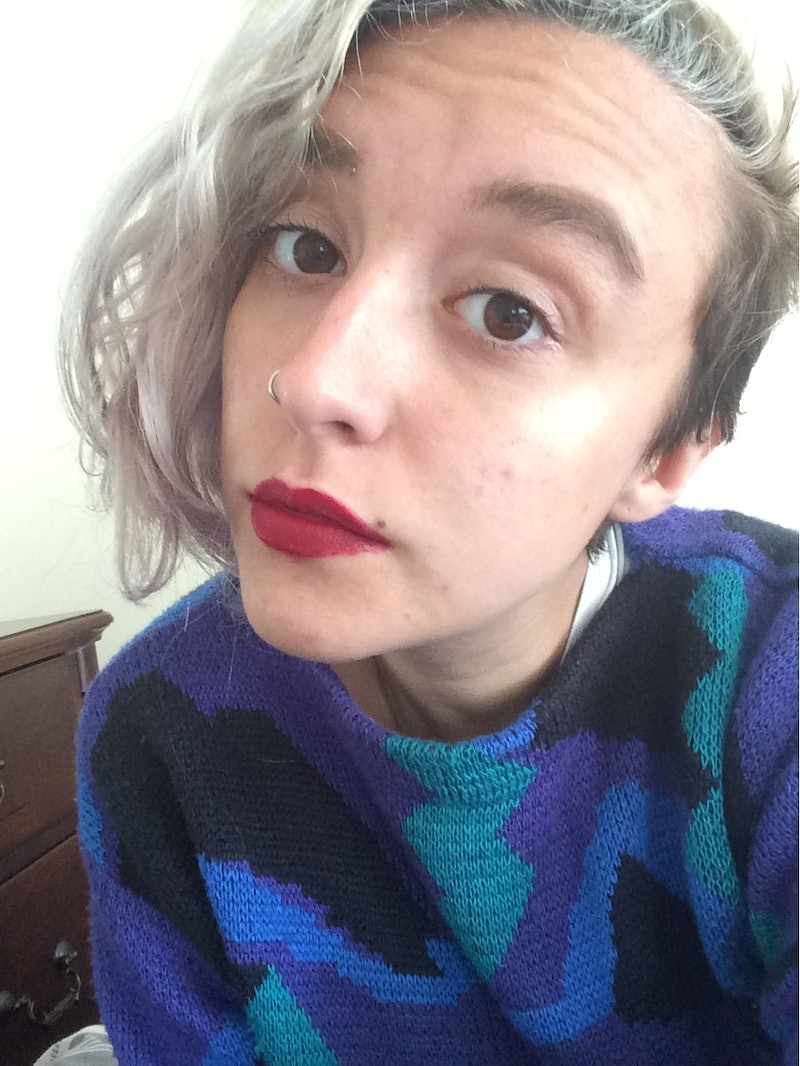 When I was younger, I took great pride in my long, brown hair. For years, my locks reached my waist, and I would revel in the feeling of hair brushing against my butt as I tilted my head back and swayed it from side to side. Because of this obsession, I never thought I would consider cutting or dyeing my hair. My mom had often changed the cut, style, and shade of her own, but I felt I could never do the same.

As a sensitive and anxious human, the thing I'd always feared most in this world was change. And as I grew older and became committed to all things vegan and organic, I was also petrified that the chemicals in dyes and bleach would cause damage to my luscious locks. The hypochondriac side of me took great pleasure in obsessing over all the unlikely but possible woes that could result from hair dyes, such as cancer. And I nearly fainted when I learned that my mom had bleached her hair while pregnant with me, before her doctor told her that it wasn't a good idea. So never did I imagine that I myself would fall in love with altering my locks through colors and cuts, nor could I have even begun to fathom the many ways doing so might affect and benefit my psyche.

When I started college, I began feeling more rebellious. My queer ass was listening to Gaga's Born This Way album on repeat, and I took heed to her words, "I'll die living just as free as my hair." I was 18, and I had never dyed my own. Despite being a legal adult, I was still living my life in a bubble of fear, concerned about all the ways the universe could potentially do me wrong. And so I slowly began letting go of my hypochondriacal take on health (which I likely developed thanks to being sick throughout most of my teenage life), and relaxed into experimenting with my look. I bleached the ends of my hair (now chest-length instead of waist length) in a dip dye gone awry, with streaks of purple throughout. It was tragic-looking, but it was a step in the right direction.

I then transferred to another school for sophomore year, making the transition from community college to full-fledged college student living on campus. There, I cut off the bleached, damaged ends of my hair and got a nice ombre (from a more skilled hairdresser this time). And you know what? I felt like a million bucks.

A couple of months later, however, I was assaulted by a controlling partner. I fell into a deep depression, and did nothing but drink and smoke for months. I was disillusioned, ashamed, and felt entirely out of control over my own life. With my parents' permission and generous financial support, I spent half of that summer in India and the other half couch-surfing in the NYC area. I did a lot of healing and learned a ton about myself in those months, but couldn't quite bounce back.

Taking my friends' advice, all of whom loved to change their own hair constantly, I chopped at my mane in the bathroom at the beginning of junior year until it was all shoulder length. And in those moments, I truly felt like I'd shed some part of my trauma. Some of the emotional baggage that held me back from growing for so long. And I pursued life with a new vitality.

I began making a habit out of changing my hair whenever I needed to see real progression in my life, and whenever I needed a reminder that I had complete agency and control over my identity. I worked through my nagging feelings of anxiety at the thought of another change, and cut my locks shorter and shorter without regret. I shaved one side, then both sides, then all over my head except the top, leaving one long crop of hair that I either curled or threw up in a bun.

Pretty soon, I felt ready to take the plunge and (gasp) dye my hair. No skirting around the subject, no ombre or dip dye: I would dye my whole head, including my roots. My hypochondriac side took a vacation.

After a long and stressful school year of broken friendships, hostile living situations, and fluctuating insecurities about a new relationship, I was due for yet another change. I set my color standards high, hoping to achieve a gray and lavender 'do. And with the help of my very talented and patient friend Bologna, I made it happen.

It was a huge shock to see myself without my brown hair. But when I did, I began to perceive myself differently. I became aware of my ability to change and transform; to create someone entirely unrecognizable. But at the same time, completely familiar and right. I reveled in my alien princess aesthetic as I let go of yet another piece of my anxiety, and eventually came out as non-binary. I now looked like the weird gender alien I knew I was inside, and I'd never felt more at peace with the world.

Just as I quit an internship at a terribly toxic place soon after and began pursuing therapy, I experienced a physical transformation by default as the dye faded from my bleached hair. That summer, I spoke about my assault with a professional for the first time. But after being steeped in my feelings for so long, suppressing my masculinity for reasons still unbeknownst to me, and returning to school uncertain of where I socially stood, I needed another emotional detox.

I wanted so badly to dye my hair black, and my urge to do so increased after my best friend did the same. I was afraid to make the leap to the hue: A color entailing greater commitment, since I wouldn't be able to adorn my hair in my beloved pastels for quite some time. But with a little push from my bestie, who lovingly dyed my hair himself with a store-bought kit, I achieved black locks.

Once again, as the color slowly set in and as my friend gave my strands the final rinse, I felt an incomparable amount of peace. It was as though all the emotional residue from the past few months was washing down that sink, and I could finally breathe again. I felt motivated to do a better job at self care. And the color triggered an intense feeling of masculinity in me that I'd previously felt unable to fully express.

Constantly altering my hair has made me virtually unrecognizable from my former self, and has therefore given me the power to have agency over shaping myself into a person that is closer to who I really am. Transforming my hair serves as a catalyst for change — for a new way of thinking, as motivation to take the next step in healing my mental state, and to become closer to the gender fluid individual I want to be.

Seeing a slightly different person in the mirror looking back at me, I'm reminded of all the ways my life has changed me, and of all the ways that I have the power to tell my story. Dyeing my hair is an act of body positivity that says, "I see you, and I will be the change you want to make for yourself." My former self — the self that was obsessed with the potential repercussions of hair dye — would be happy to know that the risk is all worth it. And that my mother and my friends were right. Dyeing and cutting your hair can be completely therapeutic.

More like this
Most Comfortable Underwear For Big Butts
By Audrey Williams
"The Sachel" Is The New Haircut To Know Now
By Justine Knight
Your Guide To The Octopus Haircut, The Chic Shag-Mullet Hybrid
By Danielle Sinay and Jordan Murray
11 Bella Hadid Hairstyles That Prove She's A Beauty Chameleon
By Jordan Murray
Get Even More From Bustle — Sign Up For The Newsletter