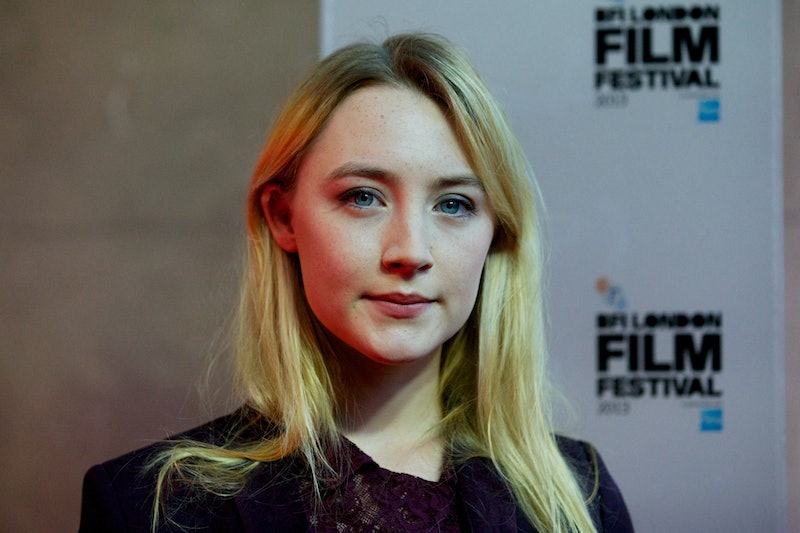 Have you seen Brooklyn yet? I haven't, but judging from all of the buzz it's been generating (not to mention the to-die-for costuming), it's a definite must-see — especially now that its star Saoirse Ronan has picked up a 2016 Golden Globes nomination. This isn't Ms. Ronan's first time around the awards circuit — she picked up a ton of awards nods (including an Oscar nom) for her role in Atonement — but it will still be exciting to watch her walk all of the red carpets. She does, after all, have some pretty rad style — so, let's speculate: What will Ronan wear to the Golden Globes?

She's got pretty eclectic taste, but there are a few constants throughout her red carpet metier — she has retro sensibilities, she's not averse to some fun, ultra-feminine detailing (such as pink ruffles galore), she's more than willing to take a fashion risk or two, and she's got something of an affinity for the eccentric. All in all, she's a bit like a fledgling version of bona fide red carpet queen (and fellow nominee) Cate Blanchett — often bold, often stylish, and often girly (sometimes all at the same time). So, with all that in mind, let's take a look at some of her red carpet history, and try to suss out what she'll wear for her next big awards show!

Ronan's been known to stun in Valentino on many a red carpet, perhaps most notably at last year's Vanity Fair post-Oscars party — will she choose the famous fashion house again?

This short, embellished number from the Spring 2016 Ready-to-Wear collection would look absolutely killer on her.

The Brooklyn actress has also shown a preference for Lanvin's stylishly off-the-wall dresses.

This shade of blue would look wonderful on her, and the draping is gorgeous.

This multi-textured gown is a tad funereal, but I could definitely see Ronan taking it out for a spin.

In one of her most recent red carpet outings, Ronan opted for British designer Emilia Wickstead. Think it'll be a well she'll return to again soon?

This flirty (and retro) pink striped number would definitely make her stand out at the Golden Globes (and her character in The Grand Budapest Hotel would likely approve).

What with its femininely elegant-yet-quirky sensibilities, Chanel might just be the perfect designer for the big night.

Retro-futuristic, with a side of frothy ruffles? Um, yes.

This stunner would be a nice callback to the green empire-waisted dress she wore to her first Oscars back in 2008.

Over the years, Ronan has pulled off some quite memorable looks from Alexander McQueen, including this red stunner from the 2011 Met Gala.

This delicate avian-featuring gown is downright stunning, and it fits in nicely with Ronan's eclectic taste.