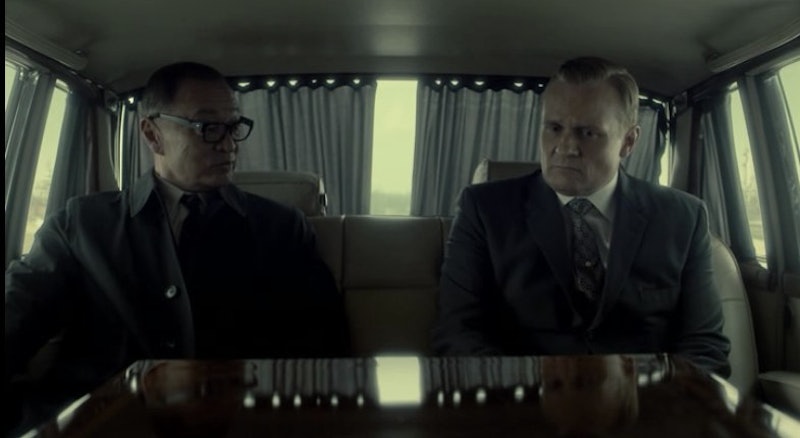 There are 17 years between the end of World War II and the beginning of Man in the High Castle that go unaccounted for. We don't know what has happened in the almost two decades exactly, other than the fact that the Axis powers won the war and the U.S. became a land of Nazi and Japanese power, split down the middle. For actor Carsten Norgaard, who plays Rudolph Wegener on Man in the High Castle , filling in those holes was crucial for him to create his intricate character, he tells Bustle in an interview. "It was important to have the foundation of [those 17 years] and know where the characters fit into those parameters."

Norgaard, who also read the book The Man in the High Castle to prepare for the role, says that one of the first things the director and writers did was sit down with the actors and fill in the gaps for what happened in those 17 years.

One thing The Man in the High Castle does well is showing, and not telling, you what happened. Instead of spending episode after episode explaining how the U.S. got to the state we see it in on the show, little hints are dropped as to the condition of the States and the characters that inhabit it. "It has an ambiguity to it," Norgaard says. "But it goes with the tone."

"As you peel off one layer, you discover something else," the actor says. Norgaard's character of Wegener is a perfect example of peeling of layers. "He's a complex character," he says. According to Norgaard, Wegener has done "terrible things and he's guilty of those actions. It weights heavy upon him and it's messed up his family life."

When the show picks up, we see a Wegener who is finally at a place "where he wants to atone for [his past]," Norgaard says, which is why we see him working with Tagomi throughout the season. "He's haunted by the atrocities he's committed on behalf of the Reich," Norgaard says, "These are his efforts to his attempt for redemption."