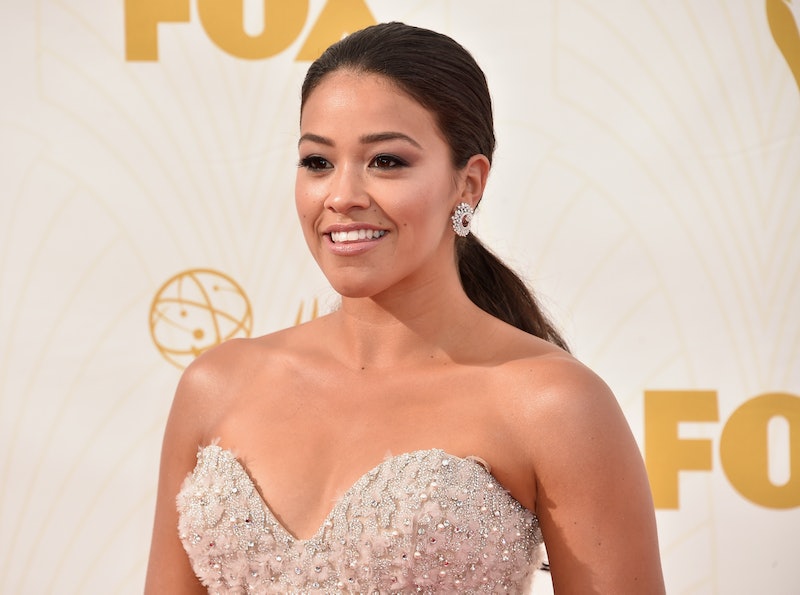 Gina Rodriguez getting a Golden Globe nomination was only the second-best Gina Rodriguez related event today; Gina Rodriguez's response to finding out she was nominated was even better. The Jane the Virgin star was ecstatic, for more than one reason, as she told The Huffington Post. Rodriguez not only received her second consecutive nomination for Best Actress in a TV Comedy on Thursday, but her student loans are officially paid off! I already love Rodriguez and I love her even more for sneaking some advice about education into her statement.

In a statement to The Huffington Post, Rodriguez said,

Today two fantastic things happened. My work on Jane was recognized and celebrated by some of my favorite people for a second year. And my student loans from the university that taught me to act were paid off. Education works, how serendipitous.

The 31-year old actress took home the award last year at the Golden Globes for her outstanding performance as Jane Villanueva, the titular virgin in the telenovela from The CW that is so good. In her emotional acceptance speech, Rodriguez talked about the lack of Latina representation on mainstream television and said the award "represented a culture who wants to see themselves as heroes."

Rodriguez was the first Latina woman to be nominated in the category in six years. The last was America Ferrera, who was nominated and won in 2009 for Ugly Betty.

Not only is Rodriguez continuing to bring some diversity to the Globes with her nom, but leave it to her to also use the occasion to remind kids to stay in school in her statement. Not that everyone can afford to take on student loans, but I think it's an important message for a woman of color to send — that anything is possible, even if the world is telling you it will be twice as hard. Rodriguez's character, Jane, echoes this too; a major conflict in the show is Jane's struggle to split time between graduate school and being a new mother.

I hope Rodriguez takes home the Globe for the second year in a row, but even if she doesn't, she's proven she's the kind of strong voice that Hollywood desperately needs to tell more diverse stories. Also, if you're not watching Jane The Virgin, you're seriously missing out. There's a reason she won the Globe last year!

More like this
Sandra Bullock, Girlboss Extraordinaire
By Matt Harkins & Viviana Olen
Spice Girls’ Net Worth: The Richest Member Is Wealthier Than The Rest Combined
By Hugh McIntyre
Billie Piper Just Confirmed 'I Hate Suzie’s Festive Return
By Kayla Blanton and Shahed Ezaydi
Yes, Billboard Queen Angelyne Really Ran For Governor Of California
By Brad Witter
Get Even More From Bustle — Sign Up For The Newsletter