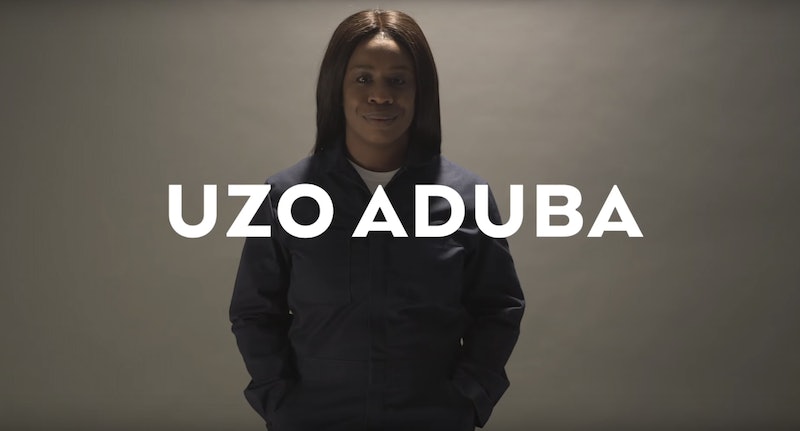 Even self-professed feminist cinephiles have to admit one sad truth: many great film roles go to men. But does it have to be that way? Of course not — and the idea that men somehow can embody more interesting characters has officially been shut down by a few of your favorite actresses. Glamour has just launched a series called "Role Reversal," where actresses take on the iconic monologues that male actors have made famous. The concept is brilliant, but the actual results of the monologues? Well, they're absolutely outstanding — and just the proof you need that women can play just as complex and interesting of a character as their male peers. But, of course, you knew that.

This time around, "Role Reversal" treated us to three different monologues from three different actresses. Orange Is the New Black's Uzo Aduba tried on a different kind of "crazy" by performing Hannibal Lector's creepy monologue from The Silence of the Lambs, Scream Queens' Abigail Breslin commanded a room with the Tyler Durden monologue from Fight Club, and lastly, Grandma's Julia Garner ruled the Internet with the icy monologue from There Will Be Blood. These women may be performing monologues we all know and love, but they make them completely their own.

While female-led films are gaining momentum, the numbers are still weak. In 2014, a study from the Center of the Study of Women in Television and Film at San Diego State University revealed that only 29 percent of major characters in film were women. The reason for that isn't because men are getting these roles over women: it's because there simply aren't enough roles being written and produced for them. It needs to change now.

There's this idea that certain types of characters are automatically male. Sometimes that's true: after all, Fight Club is a movie about a man feeling inadequate, only to create this Tyler persona in his mind. But in general, there's no reason why women can't play the Tylers of the world: characters with hard edges, questionable convictions, and yes, even a tendency for violence. As we've seen in these monologues, women can be just as convincing as men — even while playing a notorious cannibal like Hannibal Lecter.

Let's take this project as proof that we need Hollywood to produce more films and television shows with women — roles that, I hope, men will covet down the line. Hollywood clearly has the talent as their disposal, now they just need to do the right thing with it.