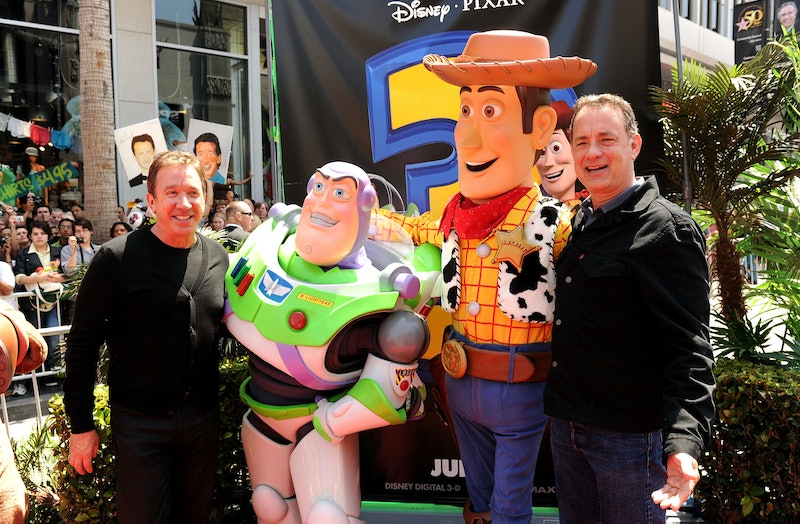 The Golden Globe-nominated Disney/Pixar film Inside Out features a ton of famous voices, from Amy Poehler to Lewis Black to Mindy Kaling to Bill Hader. But 20 years ago, Pixar was just starting its groundbreaking dive into feature-length computer animated films when the company cast Tom Hanks and Tim Allen in Toy Story. ABC honored the 20th anniversary of the beloved film franchise in the hour-long Toy Story at 20: To Infinity and Beyond on Dec. 10 and the special gave insight into how these famous actors got to voice some of the most iconic characters to ever grace the big screen.

The genius director behind Toy Story , John Lasseter, said that the Pixar team decided to do a buddy picture since it was a genre not really explored by animation before. (Never forget The Fox and the Hound!) And so the team knew they had to get too very different characters to play opposite each other. Once the idea of the cowboy Woody was decided upon, Pixar screenwriter Andrew Stanton said he understood that Woody would need to be a lovable, yet flawed leader since he was a bit selfish. The filmmakers imagined a Jimmy Stewart-type of character and said that Hanks was the only actor that they even considered to voice Woody. (Hanks is the modern day Stewart after all.)

Hanks was interviewed for Toy Story at 20 and though it didn't seem like it would have ever been a tough sell to get the Forrest Gump actor to join the film, Pixar animated Woody to dialogue from Hanks' film Turner & Hooch, which officially got Hanks on board.

To give Woody a worthy adversary/BFF, Pixar created the space hero action figure Buzz Lightyear. Lasseter wanted an action figure that could be funny and loved Tim Allen's stand-up comedy. He showed his stand-up to the other people at Pixar and Allen got the job. The special also explained that Allen's performance directly changed the character arc or Buzz Lightyear; Allen's first reading of Buzz was so honest that they decided to have Buzz not even be aware of the fact that he really is a toy, which is a huge plot point in the first Toy Story.

Considering that both actors have stuck around to voice these characters over the past 20 years, you know they made the right career choices. And the men took pleasure in their Toy Story at 20 interviews recounting times they voiced the characters for unsuspecting children, with Allen's version saying that the child was frightened by the ugly man who swallowed Buzz Lightyear.

Allen said to this day he takes ownership of Buzz and gets "very protective" of his character. (His favorite line from Toy Story is when he says to Woody, "You are a sad, strange little man and you have my pity.") Hanks, who has starred in some of the best films in recent American history, said that being a part of Toy Story makes him feel like "the luckiest guy in the world." Well, to both Hanks and Allen I say: Fans of Toy Story are lucky to have you voice these animate buddies after all these years.