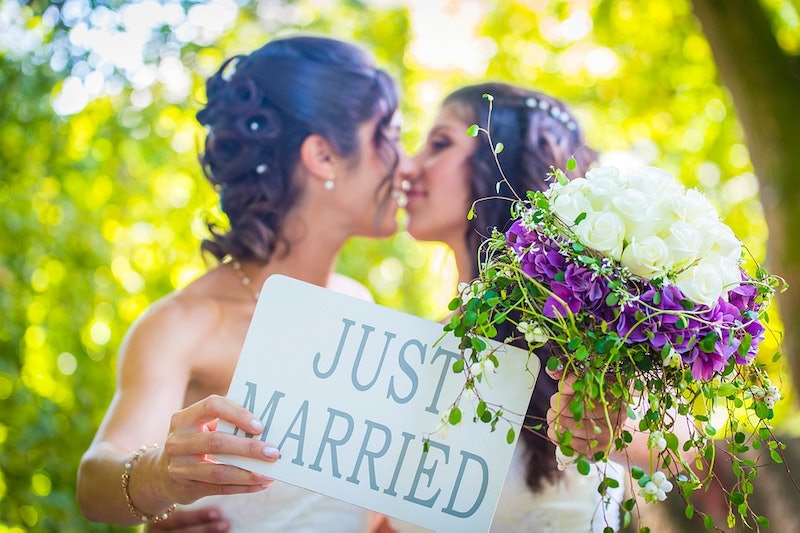 I used to think marriage was just a piece of paper. An antiquated ritual that was once used to transfer ownership of women from one person to another. I didn't think there would be any way marriage would change my relationship for the better because my relationship was already great. And then I got married. And, you guessed it, everything changed. Well, not everything. But many things.

I've only been married for a few months, so I'm still firmly entrenched in the honeymoon period, but I've been married long enough to see my relationship transform from a couplehood to a marriage. Those things, I'm learning, are indeed very different. Now that I'm in it, it makes sense that so many things would change, but I admit, I would never have known any of it without having actually tied that knot.

What I'm getting at is this: Being married is pretty great. It's also pretty hard. But it's completely and surprisingly different from any other type of relationship. It makes things so much better, but also so much more complicated. But complicated in the best way. I am a convert, and I can say from experience now that I had no idea what I was talking about when I was on my anti-marriage high horse. Here are some of the ways I've seen my own relationship changed by marriage:

Spouse! As in, I was a wife. And I had a wife! It was mind-blowing in a way I could have never anticipated. When you're married, you get to go through this adorable phase where you're constantly saying things like, "Hi, wife/husband!" and "How is my wife/husband today?" You no longer suffer being an adult person who calls their partner something like "girlfriend" or "boyfriend," which sounds like junior high somehow. That sounds like a tiny, insignificant thing, but it doesn't feel like one. It feels like a wonderfully magical adult thing.

2. You Have A New Sense Of Security

When you take your commitment to the highest level, you feel a sense of safety and security that's unparalleled. During arguments as a non-married couple, I never worried that we were going to break up, but now as a married couple, I know for a fact that we aren't going to break up. We made a commitment to work it out, and that's what we're going to to. This is so emotionally and psychologically comforting.

3. You Have Even More Freedom

When you get married, you don't have less freedom. It's actually completely the opposite. You're operating from such a solid base that you feel an elevated sense of support and security. You can focus on your own goals in a new way because you know you're operating from a strong base. You don't have to worry that traveling for work or taking time to care for a family member is going to create distance because you know you have your whole lives together. It sounds like semantics, but it feels very different. In some ways, it feels like the world opens up.

Ah, the honeymoon period. I didn't think it was possible to love my wife more that I already did, and then we got married. My heart grew a few sizes or something because my love for her just went through the roof. We are so much closer, both as a couple and as friends. Our love feels bigger, deeper, and somehow more important than it was before. Even when I'm mad at her or she's being super annoying, I feel like she's the greatest human being ever created.

5. You Get More Real

You're married, so you're solid. You're not going to break up. That gives you a surprising freedom to be even more real than you were before. And we were already pretty real. But since we got married, we have a new freedom to express our opinions and disagree. When you're a couple, all of those little problems can come together to make a compelling case for a breakup. When you're married, they're just small stuff that you'll navigate and move on from. Plus, it's nice to get a real opinion on my outfits now.

Yeah, marriage makes you fight more, but it makes you fight better. Because of that freedom to be real and that new sense of security (oh, and those vows that you plan to take pretty seriously) you aren't afraid to be brutally honest, to disagree, to be angry, or to make your point. You also work harder to resolve things, though, and they're real, lasting resolutions that are good for your family.

When you're married, the world treats you differently. It takes your relationship more seriously. You go from being a couple to being a family. You seem more mature and together, even if you're not. This was perhaps the most surprising benefit of becoming married. I paid $35 to the state of Colorado and suddenly I was a person who had my sh*t together. I don't have it together, for the record, but I'm OK with the world thinking my adulting is on the next level.

I didn't think getting married would change anything, but it really did change everything. It doesn't feel oppressive or antiquated at all. It feels like difficult, messy, secure, snuggly bliss.