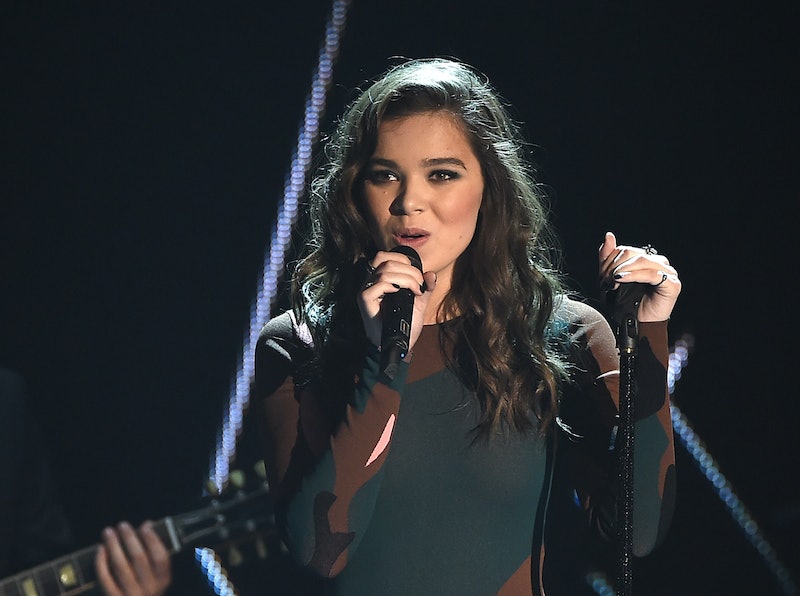 Hailee Steinfeld may only be 19 years old, but she's pretty quickly dominating everything and showing that there's nothing she can't accomplish. She started acting at the ripe old age of eight, and has starred in 14 (!!) feature films since. She's also made several TV appearances, modeled in a Miu Miu campaign, and, after becoming the breakout star of Pitch Perfect 2, she's taking on the music world with the release of her debut EP, Haiz , last month. I don't know about you, but when I was 18, my biggest accomplishment was that I did my own laundry on a (semi) regular basis, so Hailee Steinfeld is kind of my hero.

Although the singer-actress shows no signs of slowing down and is likely to continue amassing career success (and possibly world domination), the most refreshing and exciting thing about her is her attitude towards herself and building up self-esteem. Most people at her age are horribly insecure and still trying to find themselves and their place in the world, but Steinfeld came out swinging with her first single "Love Myself" in which she touts the importance of "taking care of yourself and indulging yourself, whether that be emotionally or physically or with material things," as she told Pop Justice.

Whether you're 19, 49, or even 79, Steinfeld's confident words of wisdom are worth printing out and putting up on the fridge, in your wallet, or any other place where you'll see them every day. Here are some of her best quotes on life, love, and putting yourself first, and some of her favorite words to live by.

1. On Fitting In At School

"I’ve learned that one of the biggest struggles people have in life, is accepting themselves for who they are. I realized in middle school that it was impossible to make everyone happy. The more I tried to fit in, the more I felt horrible about myself. School is a place we go to learn, not a place we go to try to fit in. Be yourself. Believe in what you know and not what others say about you. Take whatever negative energy is thrown your way and use it to empower yourself," Steinfeld said in a Tumblr message to her fans. And it's so important, even if you're not in middle school anymore.

"I want you to know that you control your destiny. You control your feelings. Don’t let others dictate how you feel about yourself. Don’t give them that power. Love yourself!" Steinfeld also wrote on her Tumblr, and it's like, same.

3. On Putting Yourself First

“You must love yourself before you love another. By accepting yourself and fully being what you are, your simple presence can make others happy.” A quote by an unknown person that she keeps in her phone, according to her Tumblr post.

"The one piece of advice that sticks with me, which also happens to be the most simple, is to have fun. Once it becomes anything other than fun, is when you realize you're not in the right place. Someone told me that when I was 13 — and that was when I was having the most fun and I've not stopped having fun since. So I think that's really important," she told The Independent this past summer. She was officially the wisest 13-year-old to ever live.

5. On Pressure To Drink & Use Drugs

"There are times in my life when I’m walking around in the world trying to figure out where I belong and what makes me happy and comfortable. We’re put in situations where we feel pressured to conform to behavior that’s going on, and with [a song on her EP called "Hell No's and Headphones"] it really is about not feeling like you have to do or say anything to be anything other than what you’re into. This is about an experience that I had and ... it’s about allowing yourself and giving yourself permission to know that’s it OK to not conform," she told TIME this past summer.

"There are experiences that people go through where they feel like they’re the only one that’s going through them, and there are few people who are able to express that situation. But you realize how many other people around the world have gone through that situation or something similar ... It carries over wherever you live or wherever you’re from or whatever you do. It’s just the idea that you’re in a place where you’re like, 'I’d rather be doing what I love.' And for me, that’s saying 'Hell no!' I put on headphones on and immerse myself in a world that I love and do what I do, which is make music," as she told TIME .

7. On Doing It All Yourself

"Realizing that you can do just about everything on your own is incredibly empowering," she told Refinery29. Hell yeah, girl!

"I think growing up in a world where it’s so hard to be understood and heard in the right way, I’ve learned the importance of having self-love and self-confidence," she told Entertainment Weekly. Preach!

“When I love, I love without limitations. But if you betray me, I love myself enough to let go,” an unknown quote that Steinfeld lives by, according to her inspiring Tumblr post.

“Loving yourself… does not mean being self-absorbed or narcissistic, or disregarding others. Rather it means welcoming yourself as the most honored guest in your own heart, a guest worthy of respect, a lovable companion.” a quote by Margo Anand that Steinfeld loves, per her Tumblr page.

"You yourself, as much as anybody in the entire universe, deserve your love and affection," Steinfeld quoted in her self-love post on Tumblr. Amen, sister!

Steinfeld is a great role model not just for her peers, but for anyone that has ever felt self-conscious or insecure, and she's only going to be wiser as she gets older. I can't wait to see what the future holds for this lovely lady.

More like this
Sandra Bullock, Girlboss Extraordinaire
By Matt Harkins & Viviana Olen
Spice Girls’ Net Worth: The Richest Member Is Wealthier Than The Rest Combined
By Hugh McIntyre
Lydia Leonard Is Setting The Record Straight
By Olivia-Anne Cleary
Kanye Walked Out Of Kim's 'SNL' Monologue Because Of These 2 Words
By Jake Viswanath
Get Even More From Bustle — Sign Up For The Newsletter