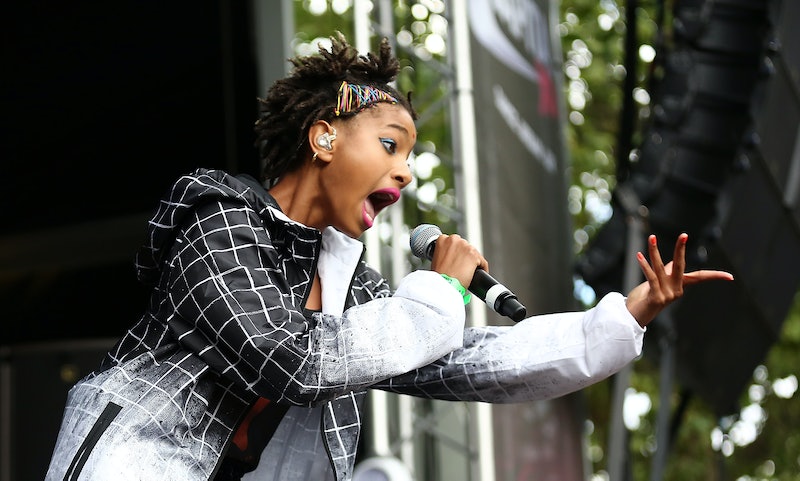 It has been a thrilling year for the Smith progeny; there have been insightful interviews, prom, and now Willow Smith dropped a full 15 tracks on her surprise album Ardipithecus, which is her first full length release. The album was only hinted at with a couple of cryptic tweets of the release date and the single "F Q--C #7" in May. She unceremoniously released the album with a link to the iTunes download on Twitter; it's also streaming on Spotify.

The 15-year-old's sound has changed a lot since the days of "Whip My Hair." While this album is much more serious, she isn't trying to disguise her youthfulness or naïveté. She also has a very strong voice, one that often breaks with emotion, and sometimes anger. Her subjects of exploration are consciousness, nature, the future, and technology; she perhaps uses the word "forest" a few too many times overall. There are also a lot of references to new age magic, though there also appear to be influences of the kind of magic one might read about in YA fantasy. It's a treat to be able to listen to a voice of adolescence that is neither pretending to be grown up nor claiming innocence. These are the songs from the album, ranked according to my very partial opinion.

The album's closer is unfortunately one of the most generic and least Willow-y of the album. The pounding beat by the album's end is a little headache-provoking. However, it's still pretty catchy, and props for the environmental message.

This celebration of nature is perhaps a little clichéd, though the references to the elders and the forest is pretty sweet. It's one of the shorter songs of the album, and thus a little forgettable.

The woozy opening track almost painfully outlines the struggle of a teen with an old soul and an independent spirit. It's a great thematic intro to the contents of the album with some appropriately swelling instrumentals and a sense of building panic. That said, it's a little long, but maybe appropriately prepares the listener for a challenging album.

The pounding beat and sinisterly building strings provide an anxious, desperate feel alongside Willow's anguished vocals and assertion that she "is just a little girl." It's simple, but seems to capture the existential angst that Willow is looking for.

The dancehall beat is unexpected, but it feels a little bit repetitive by the end of the album. However, the buildup and drop at the end of the track are stellar.

I love how often Willow makes pronouncements about human nature, and I mean that sincerely. This song, though a little generic sonically, is a refreshing plea for a romantic, or at least close, partner to provide some answers to her big questions.

Smith's vocals are especially on point in this track, and this one is a bit smoother than its predecessors. The chorus is catchy but still esoteric, and the production is subtle.

This update of the single is very different, retaining some of the elements but changing the mood from a cheery celebration of nature to an introspective look at anxiety. I think I like the single a little better, but this is more complex, and I really like the club switch in the second half.

This highly dramatic song with goth vocals and a brooding bassline are a perfect vibe for Willow, and it's sinister in a charmingly indulgent way, with a powerful breakdown at the end.

One of the most banging tracks of the album brings back that gothic feel, as well as Willow's signature futuristic vibe. A pop chorus that goes "ice in our veins, love in our still hearts" is obviously great, and this song almost feels radio ready.

One of the best produced tracks of the album, this melody is very catchy. I like Willow's use of backup voices throughout this album, but especially in this song. I also love that she just throws in lines like "the vibration of Gaia" in for good measure.

This is a really sweet love song directed at what I believe is an alien. It's kind of an intergalactic love ballad, with a unicorn reference thrown in. Willow Smith 101.

Willow doesn't K, and neither do the rest of us, so she doesn't know why everyone is judging her. This song has a slightly sunnier, jazzier sound in a pretty dark album, so it's a welcome respite. Perhaps the breezier sound comes with her lyrical realization that she needs to transcend this dimension.

Nearing the end of the album, it's amazing that the 12th track is the first to use a spoken word, overly dramatic intro. The fun beat is a nice change of pace, occasionally threatening to drown out Willow's voice until she comes out clear and triumphant in the end.

This is a perfect pop track about forgetting something, but Willow hasn't forgotten her phone or even her lost love, but her consciousness. It's very danceable, and I can see it getting the remix treatment.

Congrats to this rather interstellar 15-year-old!

More like this
Selena Gomez Joked About Her Relationship Status In Her ‘SNL’ Monologue
By Grace Wehniainen
Lisa Marie Presley Reviewed Baz Luhrmann’s ‘Elvis’ Movie On Twitter
By Grace Wehniainen
After 'Heartstopper' Used This Indie Artist’s Song, Streams For It Soared 8,000%
By Alyssa Lapid
'Dirty Dancing's Jennifer Grey Wants Harry Styles To Be The Sequel’s Love Interest
By Grace Wehniainen
Get Even More From Bustle — Sign Up For The Newsletter