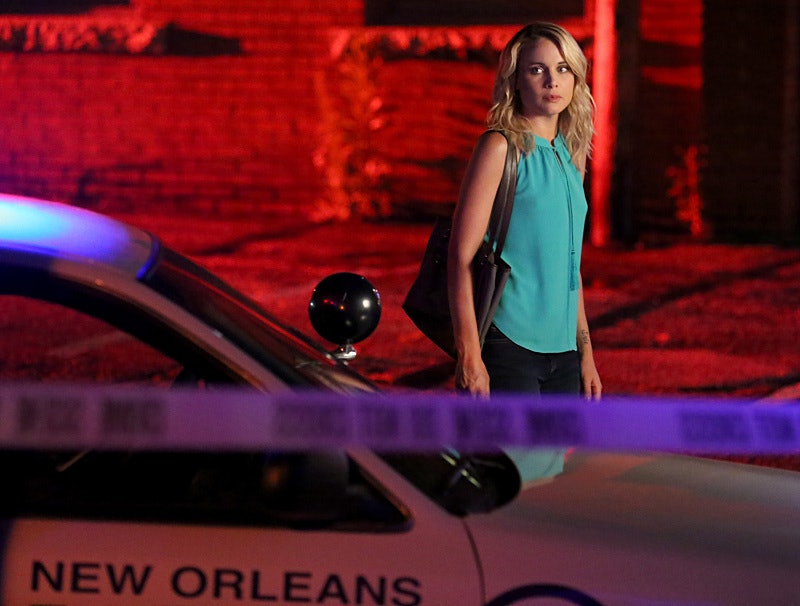 On the whole, I'd say The Originals midseason finale was a big night for Klaus and Cami. Not only did these two finally give into their feelings for one another, but the relationship also ended on a giant cliffhanger that left Cami potentially dead. Klaus woke up from their adorable little snuggle session to find that his hand was covered in blood. Cami's blood to be exact. However, we have no idea how exactly this all came to pass. Who attacked Cami on The Originals and why? The writers definitely want us to believe that Aurora is responsible, given how the camera cut right to her devilish little smile right around the same time Cami's fate was revealed. But is it really that simple or was she just being used as a red herring to throw us off the real scent?

The problem is that when you're dealing with a family like the Mikaelsons, enemies are never in short supply. It could really be anyone at this point, though it would have to be someone insanely clever to be able to attack Cami right under Klaus' nose. He is quite potentially the most powerful vampire/hybrid in the world. So, how did his heightened hearing not pick up on the attack? Surely, he would've heard the struggle, which is why I think it's important that we don't totally rule out the idea that Klaus himself attacked Cami, but not necessarily by his own volition.

Anything is possible with supernatural shows, so perhaps someone has found a way to control Klaus without him realizing it and then swipe his memory immediately afterwards. Even as I think it, it sounds a little too far fetched. But, how else do you explain Klaus — the most untrusting and paranoid guy in the world — from not noticing that person sleeping right next to him was in danger? Maybe Aurora really is that sneaky. Maybe the storyline really is as straightforward as it seems. But having been a TVD and Originals fan for quite some time now, I think these writers have a different endgame in mind here.

And hey, there's always the chance that Aurora (or some other enemy) compelled Cami to do it to herself if she and Klaus ever got together. (It does sound like Aurora to create a jealous failsafe like that.) Or perhaps it was Rebekah before Elijah had the chance to stake her. Either way, everyone is a potential suspect and I'm very much looking forward to how this all plays out.