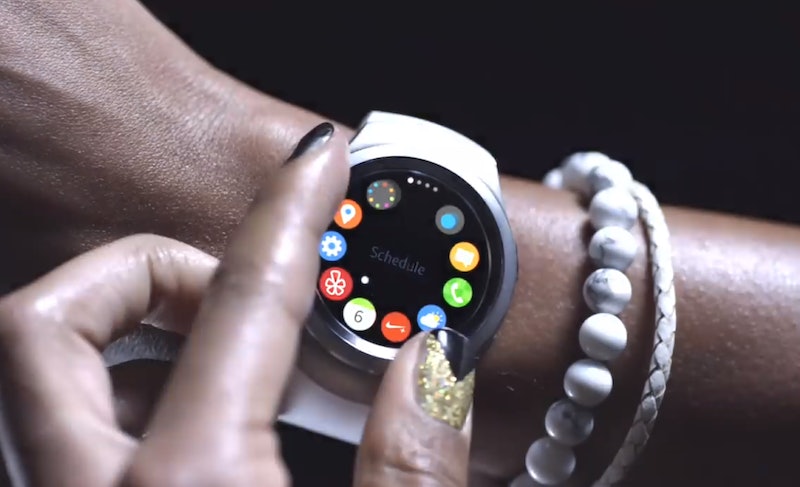 Batten down the hatches, sound the alarm, and crank up the volume on your music player of choice, because we have a serious ear candy situation on our hands. And it is all thanks to a television spot for the latest iteration of Samsung’s high-tech wristwatch device. That banger in that smartwatch ad is no joke. The song in the Samsung Gear S2 commercial (aka the song that I’ve been humming for the past week) is “The Buzz” by Hermitude featuring Mataya and Young Tapz.

“The Buzz” is the second single off of Hermitude’s 2015 album Dark Night Sweet Light. The award-nominated album is not only the electro hop duo’s first collection of songs to reach number one on the ARIA Albums Chart, but it’s also Hermitude’s first album to debut at the top spot of the Australian sales chart. And like the album, the record featured in the Samsung Gear S2 commercial has garnered a lot of, well, buzz: “The Buzz” is the first tune from Angus Stuart (El Gusto) and Luke Dubber (Dubs) to crack the ARIA Top 20.

If you want to hear all three minutes and 42 seconds of the glorious jam that is “The Buzz,” I got you:

More like this
The 4 Best Fitbits For Sleep Tracking
By Tiana Crump and Lauren Moison
Using Your Pet’s Name As A Password? Here’s Why You Might Want To Change It
By Cristina Sanza
100 Clever Gifts Under $25 When You Have No Idea What To Get
By Maria Cassano
The 10 Best Waterproof Watches For Swimming
By Lauren Moison
Get Even More From Bustle — Sign Up For The Newsletter