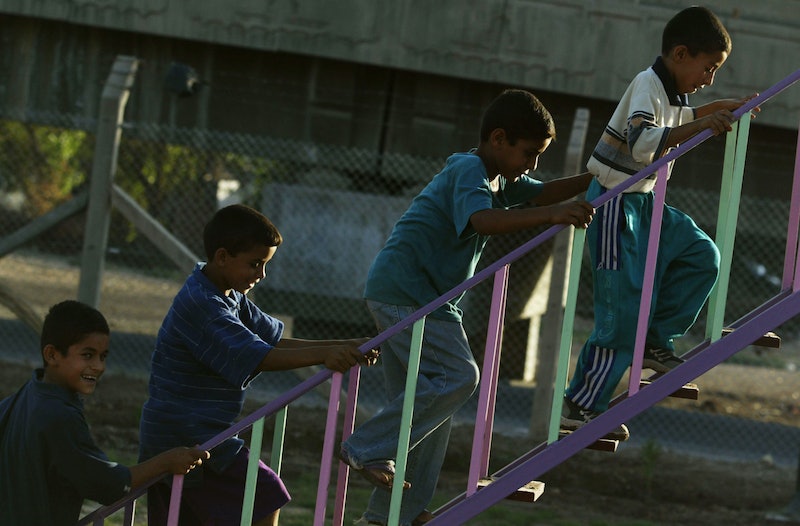 Kids on the playground might not be the most sensitive humans on the planet. Growing up, you probably thought the only thing “PC” stood for was “personal computer.” The historical significance or negative connotations behind certain words or phrases definitely eludes the ten-year-old brain, which is more interested in formulating the perfect “yo mamma” joke. Of course, as a kid you are still learning, and have a pretty narrow worldview (it probably extends as far as your family and your Gameboy). We were learning by parroting what was on TV, our parents, and the cool kids on the school bus. Most of the time, you didn’t mean to hurt anyone's feelings (that badly) when psyching them out by calling them a “pansy” on the kickball diamond. But as we grew up, it can be pretty shocking to think about what we said now that we understand the derivations of these turns of phrase.

I once got sent to the principal's office in sixth grade for saying that something "sucked" to my science teacher. I was outraged that she would get me in trouble for using slang that everyone in my class said ALL THE TIME. I didn’t realize that it was shocking for my teacher to hear a preteen kid use a slang term for oral sex so lightheartedly. I didn’t even know what oral sex was! Heck, I had just learned how babies were made, and still didn’t believe it was possible. Today, the word "sucks" is a proud part of our lexicon, and kids most likely will not get in so much trouble for using that descriptor. However, there are some things we did and said as kids that are just as offensive todays as ever, and here they are:

Dressing Up As Cowboy And Indians

Being raised on racially insensitive Disney movies like Peter Pan and Pocahontas probably didn't help to create a historically accurate setting for our playground games of Cowboys and Indians. I assume you definitely didn't learn about Andrew Jackson and the "Trail of Tears" until you were much older, but even then, in the '90s there was a severe lack of adults putting history into the context of the games we played and cultures we unintentionally appropriated — as evidenced by the "Pocahottie" costumes that are still problematically popular.

The fight for gay rights was very real and present in the late '90s and early '00s — however, the term "gay" was still widely used interchangeably with "lame" in the teenage lexicon. The word "gay" was originally used to describe something as "joyful" or "bright and carefree," but around the 17th century it came to be associated with "immorality." This was specifically in reference to prostitutes or men who slept with a lot of women. In the 1920s and 1930s, the term adapted again to mean a man who had sex with other men. And around 1955, the word came to specifically replace the term "homosexual." Today, using words derogatorily like "gay," "no homo," and "fag" to make people of that sexual orientation feel marginalized is less common thanks to activists and our ever growing awareness. Let's keep it up!

Saying That You've "Been Gypped"

When you felt cheated or lost a game, and described the experience of being "gypped," you probably didn't realize you were referring to the Roma people. Many people still don't realize that the derivation of this slang term according to the Merriam Webster dates back to the 1880s and means to flim-flam, swindle, or fraud. NPR illuminates, "According to the Oxford English Dictionary , the first known recorded definition of the term 'gypped' dates back to the 1899 Century Dictionary, which says that it is 'probably an abbreviation of gypsy, gipsy, as applied to a sly unscrupulous fellow.'" This slang won't truly go out of fashion until its racial intent is more widely known.

What once was meant as a playground taunt to diminish is now something we can take as a compliment. Always' "#LikeAGirl" campaign from last year illustrates the empowering way women are flipping this once insulting comment on its head and reclaiming it for their own.

Describing Something As “Ghetto”

You can see clearly how upsetting throwing around the word "ghetto" can be in the MTV documentary White People. One woman breaks into tears, as she describes that the seemingly innocuous term "ghetto" has been used to continually tear her down and make fun of her. The term ghetto has always been linked to segregation. The Oxford English Dictionary describes it as meaning "the quarter in a city, chiefly in Italy, to which the Jews were restricted." But after WWII, the word "ghetto" stopped being tied solely to anti-semitism and expanded to the more vague arena of race and poverty. NPR describes the many slang uses of ghetto today which are still prevalent on Twitter and social media including, "'Being ghetto,' or behaving in a low-class manner (see also: "ratchet"). 'Ghetto fabulous,' flashy glamour without the wealth. "Ghetto" as an adjective, roughly synonymous with 'jury-rigged.'" This term is never "race-neutral," and despite all these negative implications, you probably had no idea the problem with using it in your schoolyard slang.

Calling Someone A "Retard"

As a kid, many of us did not have interactions with mentally disabled people, and the word "retard" seemed divorced from its true meaning. We shudder now to think about casually calling a math test "retarded." It may have seemed a playful way to say "stupid" but this word heightened the stigma against the disabled, as well as being negative and exclusionary. The slang term comes from the Latin retardare, meaning "to make slow, delay, keep back, or hinder." The term originally had a neutral meaning but then became on offensive pejorative label in the 1960s. President Obama actually signed a bill in 2010 striking the terms "mental retardation" and "mentally retarded" from federal records. Go Obama!

Calling Someone A "Pussy" Or A "Dick"

Why weakness or cowardliness would ever be associated with female genitalia is beyond me. Without the power behind it, humans would not exist. So can we not, like, use euphemisms that degrade some super awesome parts of our body? Thanks!

You got the power!

More like this
Starbucks’ Chocolate Cream Cold Brew Tastes Like This Retro Candy
By Emma Garza
17 Genius Things You Can Do With Old Clothes That You Can't Donate
By Brittany Bennett and Dominique Norman
23 Abortion Funds In States With Trigger Bans To Donate To
By Emma Carey
Here’s Your Daily Horoscope For May 17, 2022
By Mecca Woods
Get Even More From Bustle — Sign Up For The Newsletter