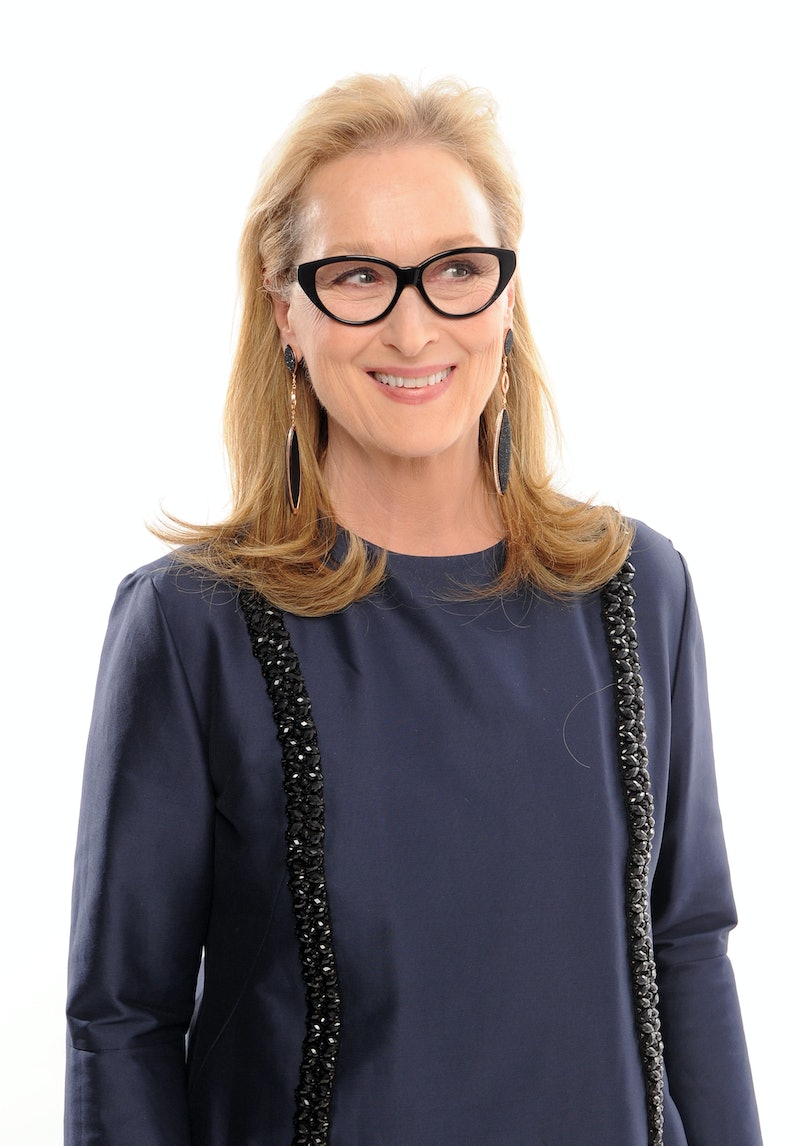 The gun control debate in the U.S. is resoundingly frustrating. Every few months, it's reignited when a gun falls into the hands of yet another young person doomed to star in their own real life tragedy played out on national news. Anti-gun folks get on TV and ask "can we talk about guns now?" and pro-gun advocates say it's too soon. The debate rages out of control and nothing gets done. Now, Meryl Streep and Harvey Weinstein are angling to do something about it with their upcoming film, The Senator's Wife.

Speaking with Howard Stern on his SiriusXFM radio show, Weinstein revealed his plans to make the NRA "wish they weren't alive." Mincing no words whatsoever, Weinstein said that he planned on taking the issue "head on" and that "I never want to have a gun ... I don’t think we need guns in this country, and I hate it, and I think the NRA is a disaster area.”

While Weinstein's opinion on guns is understandable, especially considering the incredible amount of gun violence the U.S. has seen in the past year, alone, is one dramatic film enough to change the minds of those who are resolutely on the NRA's side of the fence? Well, it's not entirely impossible — though there are severe obstacles.

If Weinstein was producing a documentary with the support of a big name like Streep, the film might stand the chance of growing loud enough it's impossible to ignore — a strange thought considering how loud the news of actual gun violence is throughout this country without the microphone of a Hollywood heavyweight.

When Morgan Spurlock arrested the country's attention with his journey in fast food Super Size Me, America listened. McDonald's — his main target in the film — wasn't put out of business, but soon after "healthy" alternatives began appearing on its menu. Children could get apple slices instead of french fries and salads and wraps became major fixtures in their advertising. They didn't stop selling the swill that made Spurlock so ill during his 30 days of McDonalds consumption, but they gave customers some better choices.

But Weinstein isn't giving us a glimpse at real life through the lens of a high-powered camera. He's working on a narrative film that he hopes can accomplish a similar feat as a "reality" film. And thanks to his timing, he's in somewhat of an uphill battle — as of December 2013, CNN reported that the intensity of gun control advocacy is fading. And even when those for stricter gun control laws held the majority, it was only 55 percent. Nearly half the nation continues to believe that no changes should be made to gun laws, so how can Weinstein possibly change that?

First, it would have to be a damn good movie. And second, it needs to garner multitudes of attention, the way something like An Inconvenient Truth did, without being an actual documentary. It is possible, though rather difficult.

A great example of feeding influence through film are war-propaganda films. Black Hawk Down, which on one hand is a horrific depiction of war, may also serve as a heroic portrait of the men involved in the infamous operation. Fox's 24 garnered strong reactions from Muslim groups when its post-9/11 anti-terrorism message seemed to skew anti-Muslim in its sixth season for fear that it would perpetuate the already extreme issue of racial and religious prejudice in the U.S.

Even Avatar, a movie most people likely remembered for its 3D effects and Na'vi-sex, attempted to put forth its own political agenda (and depending on who you talk to, a varied political agenda). While the film's creator James Cameron noted that the Iraq War undertones were present, he seemed to have a thoroughly environmental agenda, telling NPR,

It's just human nature that if we can take it, we will. And sometimes we do it in a very naked and imperialistic way, and other times we do it in a very sophisticated way with lots of rationalization — but it's basically the same thing. A sense of entitlement. And we can't just go on in this unsustainable way, just taking what we want and not giving back.

Despite this message, when the film hit theaters its cultural impact wasn't so much its "message" as it was the visual never before seen on screen. Its political aspirations were obscured by its pop culture imprint. And since The Senator's Wife isn't likely to be another science-fiction tale meant to sweep up the nation, but rather a political drama full of sound ideas, it would have to garner attention on a near-Avatar level to really turn heads in the decidedly hung jury that is U.S. opinion on the issue.

Without the real-life element or the sexy, blue creatures sending the message, it may be difficult for Weinstein and Streep to reach a large enough of audience of folks who don't already agree with them. While Weinstein's intentions may be for the greater good, he may simply be preaching to his own very receptive choir.