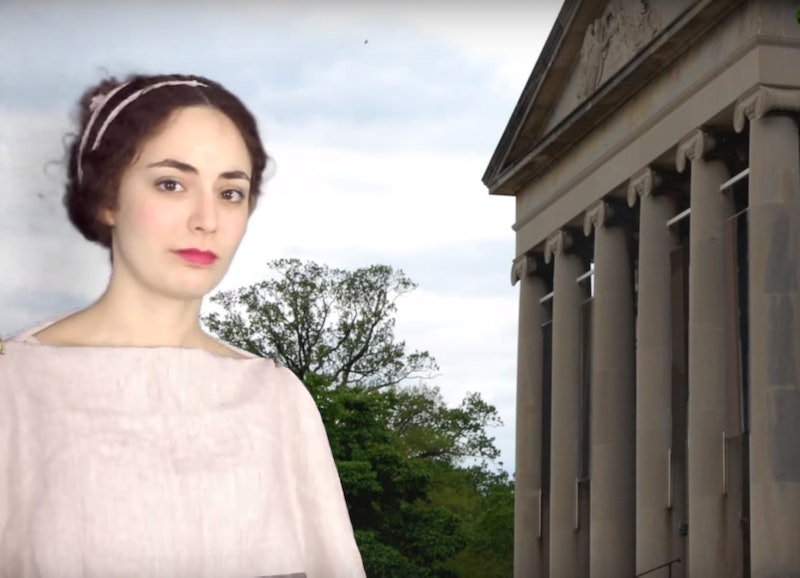 If you're a history buff, you're going to love this: a hairstylist is recreating Ancient Roman hairstyles and uploading the processes on YouTube. Janet Stephens, a hairstylist by trade, became interested in the art of ancient hairdressing in 2001, when she encountered a bust of Julia Domna at Baltimore's Walters Art Museum, according to The Cut. Intrigued by the structure needed to hold Julia Domna's impressive mega-bun in place, Stephens went home and did as any hairstylist worth their salt would: she figured it out, filling a niche in hairdressing I didn't even know needed to be filled.

Although she has no formal training in archaeology or anthropology, Stephens has managed to accomplish more than I did in five years as a grad school-hungry student. Stephens told The Cut that had she been able to recreate Julia Domna's style with modern bobby pins, she would have "just watched TV for ten years," but the 'do proved impossible to replicate. Stephens was a force to be reckoned with; she turned to reading scholarly texts, and then took up studying Latin to double-check scholars' translations. Sure enough, the mystery of Julia Domna's hair came down to a mistranslated word: acus, which can mean "hairpin" or "sewing needle." Yep, women in Ancient Rome achieved their elaborate upstyles by literally sewing them in place. That's one way to get wear out of your style.

Stephens' curiosity isn't sated yet: the Huffington Post reports that she has since published her findings in the Journal of Roman Archaeology, and uploads new videos regularly to her YouTube channel. She specializes first century Roman styles, but she has started to branch out into the Napoleonic period and the American Civil War. While I think she could stand to tackle different cultures and ethnicities (so far all her models are white), her work is totally worth a look if you're a history buff or interested in picking up some truly unique hairdressing skills. I've picked out the best I think she has to offer below.

1. Hairstyle And Dress Of An Ancient Roman Bride

Is this not a dream come true for the history Ph.D. bride?

I 100 percent plan on pranking my boyfriend's little sister with this hairstyle.

It's amazing how much hair styling has changed in just 300 years. Would you be willing to go through all this for springy curls on top of your head?

This style requires a stupid amount of hair. The model's hair reaches past her hips. Not even my extensions are that long.

I think that this style is totally wearable today, with some modifications.

The depth of Stephens' research into this style is impressive, and I'm sure it'll make reenactors quiver with happiness.

I grew up near a huge Civil War battlefield, and saw women wearing their hair like this on their way to the weekend reenactment all the time.

More like this
The Little Princess Trust Is Accepting Afro Hair Donations For The First Time
By Tomi Otekunrin
How To Master Baby Braids, According To TikTok
By Tomi Otekunrin
10 Nail Trends That Perfectly Capture The Early 2000s
By Paris Giles
10 Swoon-Worthy Beauty Looks From The 2022 Cannes Red Carpet
By Olivia Rose Ferreiro
Get Even More From Bustle — Sign Up For The Newsletter