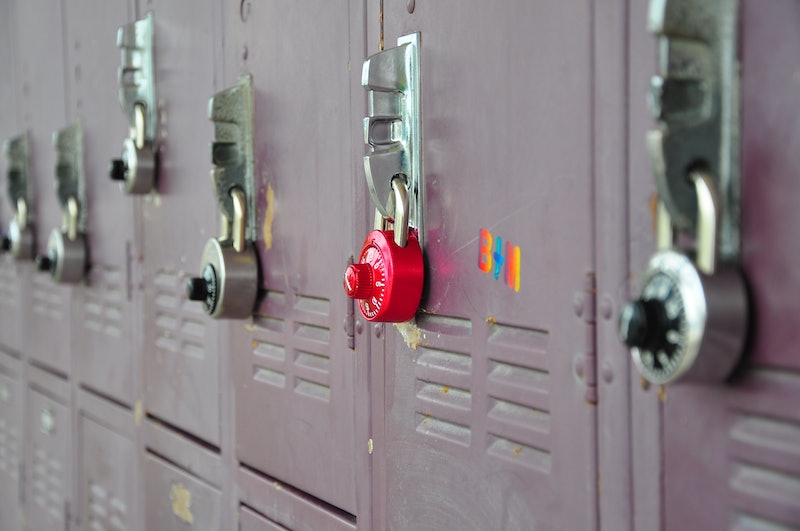 Lockers are a surprisingly personal thing, particularly when you're still in school. When you don’t have a desk or anything that’s permanently yours — a place to set up shop, so to speak — your locker becomes the one piece of real estate on campus you can justifiably call your own. As such, you’ll do everything you can to make your locker unique — and when it came to the things ‘90s girls had in their lockers? Well, let’s just say we excelled at staking our spots in jungle of halls and classrooms.

I didn’t actually have a locker in high school; my alma mater didn’t believe in them, instead giving us cubbies (yes, cubbies) and trying to teach us about “common trust” — that is, not stealing other people’s stuff, even if they left it just sitting out. Weirdly enough, it was a system that worked most of the time — it was a tiny school, so if someone stole your iMac, odds were good that they’d be caught by dint of someone else being able to identify the stickers you’d plastered all over it.

But I did have a locker in middle school, and as it happens, my middle school years occurred literally right in the middle of the ‘90s. Does the locker experience change between junior high and high school? Probably, so you’ll have to forgive me if this list largely reflects the kinds of things a 12-year-old kept around during the ‘90s. But I certainly had most of these things hanging out in my locker at one time or another, guarded by my trusty combination lock.

I still have that lock, by the way. I don’t need to use it anymore, but I kind of like to keep it around anyway. Ah, memories!

No photo booth? No problem. That’s what the Polaroid iZone camera and its sticker pics was for.

3. A Poster Of Your Favorite Heartthrob

4. And Also A Couple Of Random Magazine Pages

5. The Liner Notes From Your Favorite CD

Back when CDs were still a thing people had, and back when the liner notes were more than just a slip of paper with nothing on it but the album cover. Remember when they had lyrics and behind-the-scenes photos of the bad at work in the recording studio and stuff? Good times.

Why just one? Because it had fallen out of your backpack when you weren’t looking.

Of course. Not only that, but they’d be there long after the locker was no longer yours, too, because stickers take forever to scrape off.

8. A Fortune Fish You Bought At The School Store

For me, the “school store” was literally a table in the cafeteria that sold erasers, Jolly Ranchers, and the aforementioned fortune fish. Maybe your school store was better.

9. A Bunch Of Notes From Your Friends…

Typically folded into an impressive array of origami creations.

What else were you going to write all of those origami notes with?

Or maybe a down one, if it was really cold. You wore it over your overalls with one of those long-sleeved Gap t-shirts with a cute little cloud or rainbow patch at the neck. When I was in middle school, the outfit was completed with a pair of wool Stegmann clogs, but maybe that was a suburban Massachusetts thing. In any event, you kept the vest in your locker all winter for when it was kind of chilly in class, but not cold enough for you to want to burrow down in your winter coat. Fleece vests were so cool in the ‘90s.

One of which was Dr. Pepper.

13. The Lip Gloss You Hid From Your Parents

Because you weren’t allowed to wear makeup yet (even though soda-flavored lip balm was A-OK). Or hey, maybe you were allowed to wear makeup, and your parents just forbade you from wearing this particular type of lip gloss because they hated the overwhelming synthetic watermelon scent that permeated the room whenever you slicked it on.

Or Bath & Body Works Cucumber Melon, or Victoria’s Secret Love Spell, or whatever your fragrance of choice was.

Duh. It was probably from L.L. Bean, Land’s End, or JanSport, although not necessarily so.

Stuffed inside the backpack, of course.

17. Change For The Soda Machine That Was Only Turned On After School

Man, the more I look back on it, the more I realize how much of a Puritan streak my middle school had. Weird.

Bonus points if you knew how to create actual programs on it.

19. An Organizer Of Some Sort

Whether you were more of a Mead Five Star kind of girl or a Palm Pilot one, you had to keep track of your life somehow.

Because you keep forgetting to take them home.