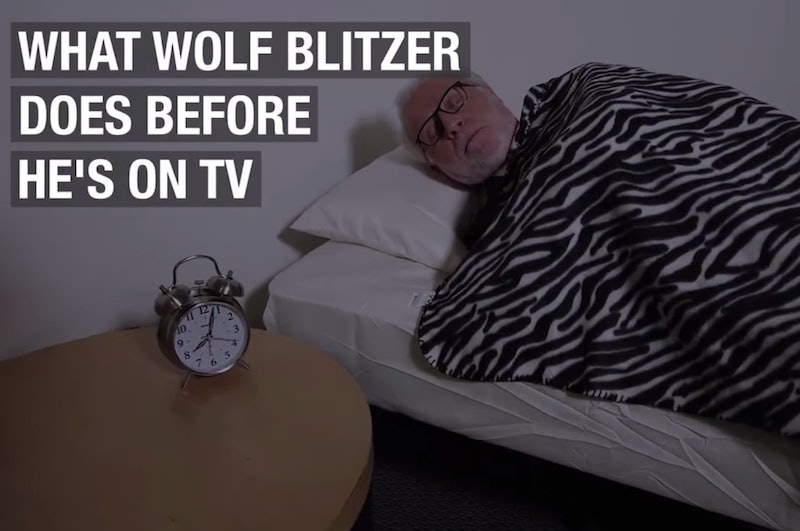 There are plenty of ways to prepare to host a presidential debate — re-reading current legislation, practicing tough debate questions on your co-workers, or memorizing the names of each candidate's family pet. However, if we're being honest here, CNN Situation Room anchor Wolf Blitzer's prep for next week's GOP debate is the best thing ever, and there's plenty of evidence to prove it. Publishing a fantastically corny video to his official Facebook page on Friday, Blitzer gave followers a sneak peek into his daily routine, which largely consists of being ready to dive into action at any given moment and knowing the names of all the Kardashian sisters (because you never know when you're going to need that sort of information, duh).

Blitzer, who's been with the network since 1990, has had a storied career of reporting the news from across the globe (Blitzer kicked things off by first joining Reuters' Tel Aviv bureau in 1972 — prime journalist real estate at that time), making him an obvious choice to host the fifth GOP primary showdown on Dec. 15. Of course, that doesn't mean he's universally loved. In a post last week, Huffington Post blogger Lev Raphael went so far as to criticize the host's speaking habits, specifically his use of the phrase "If you will." ("[He's] certainly not a good speaker," Raphael wrote, wondering whether his bosses at CNN had made the right call in ever giving him a hosting job in the first place.)

Still, there are plenty of people who admire Blitzer for his ability to deftly moderate sweeping events like the GOP debate — and as far as we know, his bosses certainly aren't complaining. Given Blitzer's hilarious debate prep revelation, it's easy to see why.

In the video posted to Blitzer's timeline Friday, The Situation Room host takes viewers through a comprehensive (if not totally hilarious) walk-through of his average day. First up: Hair, where Blitzer sits in front of a giant picture of himself and critically compares the reflection in the mirror with the image on the poster. "Ah... perfect," he remarks seriously as the stylist combs the last few errant strands in place.

Next up? "Fact checking." Speaking with CNN correspondent Dana Bash (who will also be present at next Tuesday's GOP debate), Blitzer quickly reviews the names of the Kardashian sisters. "Remember," Bash counsels, "there's Kim, there's Kourtney, and there's Khloe — and then you have the half-sisters, who are Kylie and Kendall."

"Which one was married to Kris Humphries of the Washington Wizards?" Blitzer asks, confused. Bash answers that it was Kim who had briefly been married to Humphries.

"But she's now married to Kanye West," Bash explains, leaving Blitzer seemingly puzzled (don't worry, it was a confusing time for us all, Wolf).

Finally, it's onto last-minute checks. "Remember, Wolf, this is your Situation Room — best situation room ever," the CNN host reassures himself, speaking into a hand-mirror. "In fact, best debate ever... I'm ready."

With prep like that, it's basically a guarantee that Blitzer and co. will rock it at next Tuesday's debate, which is scheduled to air at 9 p.m. ET. (Don't have cable? You can stream it live — and for free — on CNNgo.) Mark your calendar and get ready for some fireworks — Wolf is ready, kids.