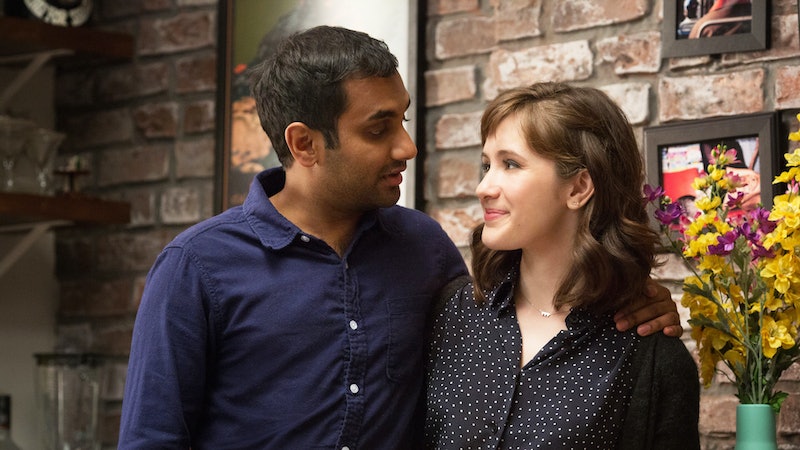 "I just say what I want." That's what Jessica Jones, the feminist character from Netflix's massively successful original series declares before the camera pans to Luke Cage and Jessica going at it in the kind of way you'd expect not from superheroes, but from living, breathing, fully nuanced, sexualized — but not objectified — adults. Jessica and Luke's relationship provided viewers with one of this this year's most honest and realistic depictions of a sexual relationship — but it's just one example of the many sex-positive moments we witnessed on TV this year.

Whereas 2014 set the stage for a more progressive television landscape (see: the premiere of Transparent, Broad City, Looking, new seasons for Orange is the New Black, Girls), 2015 took the sex-positive movement to a new level. Shows were more willing to put sexual progressivism at the forefront of their story lines while celebrating the sexuality of their characters, instead of sterilizing them. Frankly, television this year embraced sexuality and sexual interaction in ways that it simply hadn't before. Witnessing such progression on the small screen is not only entertaining and refreshing, it's hugely important for the way the sex-positive movement is treated as a whole.

Let's take a look at a few highlights from 2015's most sex-positive moments on television, because hey — those are always worthy of celebration.

Jessica Jones was (rightfully) applauded for its portrayal of Jessica's sexuality. After Jessica suffers PTSD from repeatedly being raped, the Netflix original series paints her as a complex, sexual human being, without victimizing her. There is no "wrong" way, of course — it's just incredibly refreshing to see a rape survivor portrayed in this way.

Finally: A show that treats the sexual appetite of woman in all sizes as equal. Empire handled the scene with the same amount of respect and normalcy as they would had it been centered around any of the other characters, and it was flawless.

Ilana of Broad City pretty much epitomizes sex-positivity. In the episode "Ilana's Doppelgänger", the character Ilana hooks up with, you guessed it, her doppelgänger Adele (played by Alia Shawkat). Up until this point, Ilana had never addressed her sexuality, but not because she was confused by it — because it didn't need a label. Delivering one of my favorite lines from the series so far, Ilana says, "I have sex with people different from me, you know? Different colors, different shapes, different sizes. People who are hotter, uglier, more smart, not more smart, innies, outies. I don't know, a Catholic person." Preach.

Bob's Burgers seems like the most unlikely place to find sex-positivity, but Tina Belcher pretty much embodies the movement. Tina's obsession with butts is both adorable, hilarious, and yes, progressive. As Tina has continued to grow and mature in Season 5 and 6, she remains active in her pursuit of sexuality, rather than reactive to what society projects onto her.

5. Master of None: Rachel And Dev's One-Night Stand

Master of None was able to accomplish something that not many shows can — that is, an effortless stance of sex. In the first scene of the show, Dev (Ansari) and his love interest Rachel (Noël Wells) partake in a one night stand and deal with an emergency birth control situation. Thankfully, the episode refuses to punish either character for their choices — instead, it treats the occurrence exactly as it should be treated: Without shame.

It's hard to pick one sex-positive moment from the past season of Orange Is the New Black because there were so many. From normalizing fetishes (Piper's panty business) to debunking the myth of "Lesbian Bed Death" (Unfamiliar? In Piper's words: Look it up!), OITNB has truly broadened the narrative of sexuality. The moment that really stood out this season though was Boo's storyline: In particular, the flashback scene that featured Boo and her ex-girlfriend having sex with a strap-on. What made the scene so unforgettable was the normalcy with which it was treated.

Amy Schumer is a champion of sex-positivity, so it's no surprise that her stance on sexuality is a large part of her Comedy Central skit show. Though "Football Town Nights" — a sketch that parodies, yes, rape — sounds like the antithesis of sex-positivity, it's not. The smart sketch shed a particular light on rape culture, and opened up a dialogue about consensual sex that didn't include victim blaming.

8. How To Get Away With Murder: "It's Called The Octopus" Episode

Whereas Transparent Season 1 hit the ground running with its beautiful portrayal of Maura coming out as a transgender woman — a story that is so, so important — Season 2 explores the sex and sexuality of its other characters with a more magnified lens. Specifically, Shelly Pfefferman's. As mature woman often become desexualized in the eyes of mainstream media, Shelly Pfefferman's depiction as a sexual being — with not one, but two realistic sex scenes — is an area of television that hasn't been tackled before, and something worth praising.

Here's to hoping that television keeps up its sex-positive momentum. I know I'll be there to watch as it does.

More like this
8 Mick Carter Moments That Made 'EastEnders' History
By Niellah Arboine
'Derry Girls' Creator Teases Exciting Spin-Off Starring These Three Characters
By Olivia-Anne Cleary
Long Live Bennifer!
By Allie Jones
Why The '365 Days' Sex Scenes Are Good, Even If The Movies Aren’t
By Arya Roshanian
Get Even More From Bustle — Sign Up For The Newsletter