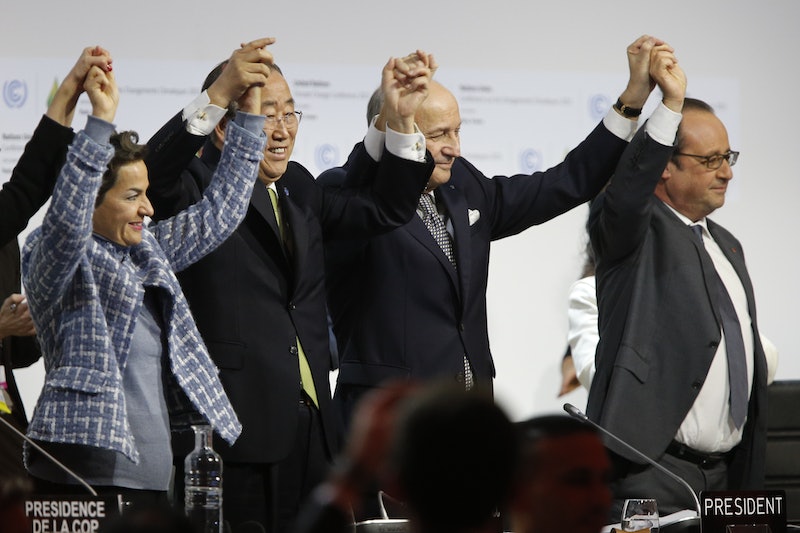 In a historic step for climate change advocates, 196 nations voted to adopt the climate change agreement at the COP21 talks in Paris on Saturday. The agreement, which came after two weeks of negotiation by delegates, finally obligates almost every country to reducing greenhouse gas emissions, widely known (unless you're Ted Cruz) as one of the leading causes of global warming.

The final vote came hours after what is known as the Paris Agreement was released to the public. Although early reports confirmed that the U.S., China, India, Saudi Arabia, and others were throwing support behind the deal, there was still speculation that it might get pushback from less-developed countries that would be required to commit money to combat global warming. All 196 countries needed to agree to the deal for it to be adopted.

So when French Foreign Affairs Minister Laurent Fabius called for any objections and heard none, undoubtedly relieved cheers erupted through the hall. Fabius, in his excitement, had to be reminded that he had to bang the gavel for it to be official. "It's a small gavel, but I think it can do a great job," he said.

If nothing else, it's heartening that world leaders can agree on something, but if there was anything that could bring everyone together it's making this planet of ours, you know, livable. But now that the accord terms have been set and agreed to, it's up to individual countries to adopt it back home. As CNN points out, the Kyoto Protocol, which also aimed to reduce greenhouse gas emissions, was adopted in 1997. But after the Clinton administration signed the agreement, it never submitted it to the Senate for ratification.

But enough with the depressing stuff. It's a good day for Earth, and it seems that global leaders have collectively decided that enough is enough. President Obama was one of the first to tweet his congratulations.

The plan is ambitious, but much needed. Ultimately, it aims to keep the average pre-industrial temperature below 2 degrees Celsius, or 3.6 degrees Fahrenheit; make sure that greenhouse gas has reached its peak level and does not spike; and for developing countries to commit $100 billion a year to combat climate change starting in 2020. The agreement also calls for five-year checks to make sure that everything is progressing sufficiently.

Of course some environmentalists have criticized the plan, saying that it is not enough to have an effect or that there no proper way to enforce the guidelines. But regardless, this is an undeniably big commitment from a coalition of world leaders that will, hopefully, help save our planet.