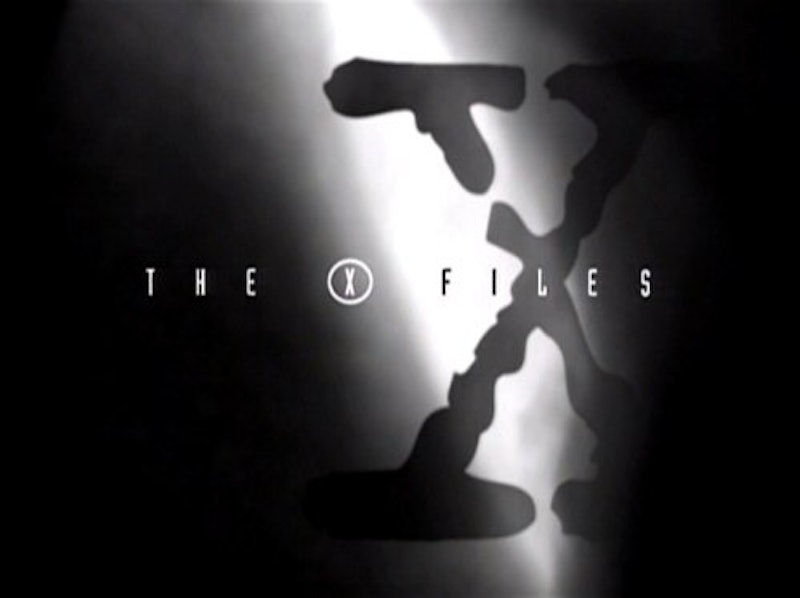 What has ill-fitting pantsuits, a never-ending search for truth in the dark and shady world of government conspiracies, and is returning to television six-part television event? If you guessed The X-Files ‚ ding, ding, ding, we have a winner! And your prize is new episodes of The X-Files. This January, The X-Files will return to Fox after a 13-year hiatus. Yes, there was the 2008 X-Files: I Want To Believe, but this is the first time the show has been on television in over a decade — so really, Fox's new behind-the-scenes The X-Files first look is my first new X-Files in a very long time.

Seriously, the only thing better than binging on Chestnut Praline Lattés this holiday season is binging on information about the new six-episode X-Files event. While details have been scarce, anticipation for this limited series have been high. We do know Fox "Spooky" Mulder and feisty redhead skeptic, Dana Scully are returning, aka my favorite will-they-won't-they couple of all time.

Also, after nine seasons, you would worry that every story had been told, every alien revealed — but series creator and executive producer Chris Carter seems confident there are many directions left for the show to explore. "The good news is the world has only gotten that much stranger, a perfect time to tell these six stories," Carter explained. And it's totally true. The world has become a much stranger place since The X-Files left the air. Like, there is nothing I want more in this world than for Scully and Mulder to investigate Ikea Monkey. There are so many weird stones left to turn!

If you are as excited about new episodes of The X-Files as I am (which, why wouldn't you be? This is awesome news), you'll freak with this behind-the-scenes look. Here are the best moments from the featurette:

There Are Stand-Alone and Mythology-Based Episodes

According to writer, director, and executive producer Glen Morgan, the first and sixth episodes of the event will deal with the show's mythology and an overarching larger mystery. Episodes two through five will be stand-alone episodes dealing with, "monsters of the week" storylines. So fans can expect lots of variety in storytelling.

Is this a crashed UFO? A downed commercial airplane? It seems like this series is primed to take viewers on a wild ride.

Mulder Has Not Redecorated His Office

As seen in the original series, Mulder is a man who does not like change. Apparently this also extends to his office decor. I'm glad to see Mulder's "I want to believe" poster is alive and well.

Two flashlights crossing beams in a dark corridor? This could only be Mulder and Scully. Does this image make anyone else's heart pound?

A large part of the original series was spent unraveling the mystery of Mulder's Deep Throat-esque source, the Cigarette Man. This mysterious message shows that there is still someone giving Scully and Mulder information on their search for the truth.

The Series Will Sound The Same

Good news for audiophiles, The X-Files is keeping it keeping it's creepy, yet intriguing, iconic score. This revival wouldn't be the same with the original theme music.

Mulder And Scully Are Still The Ultimate Couple

Creator Chris Carter may have revealed that Scully and Mulder will no longer be together in the new series, but it's obvious the spark between them is still there.

And Things Are Gonna Get Strange

In a quick a montage, we glimpse a group of unidentified flying objects soaring over a major U.S. city. Is the truth finally coming to light? I guess we will only find out when the new episodes premiere.

Check out the entire The X-Filesfirst look for yourself below:

My heart simply cannot take all of this excitement. At what point do we start calling this winter the season of the nerd revivals? The new X-Files premieres in January — this gives me less than a month to binge watch the original series, the two feature films, and the supplemental podcasts and fan fiction. All I want for Christmas this year, is more time!