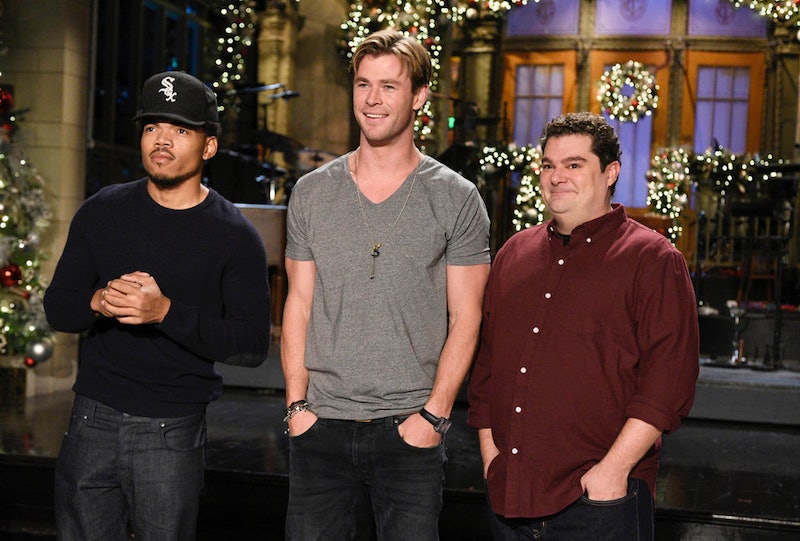 A lot of male Saturday Night Live hosts have played female characters — it's often part of the gig. But when Chris Hemsworth hosted the Dec. 12 episode of SNL, one sketch went in an unexpected direction. The sketch starts out typically enough: a group of ladies sit around a brunch table, gossiping about which celebrities they think are hot. Hemsworth's character, Claire, is among them, apparently just one of the girls. When the other women suggest Channing Tatum, Zac Efron, Bradley Cooper, and Paul Rudd as their picks for the hottest actors, Hemwsorth chimes in, and suggests himself. (When someone intimates that Liam is the hotter Hemsworth, his character takes extra umbrage. "Liam is gross," he responds. "I heard he breastfed until he was 4.")

In other circumstances, that would be the joke right there: Hemsworth-as-Claire egging women to talk about how hot the actor is. This time, though, the sketch goes in kind of a meta direction. "Is our friend 'Claire' actually Chris Hemsworth?" one of the ladies asks. Another assures that they know Claire "from college, or growing up or something." Little by little, they determine that it is, in fact, Chris Hemsworth trying to boost his own self esteem in a world where everyone seems to have moved on to actors like Chris Pratt. "I just needed to know — does anyone still find C-Hemmy attractive?"

To me, the conceit of the sketch — that Hemsworth dressed like a woman to fish for compliments — is amusing at best. But the meta-ness they layered on top of those jokes, like the way they acknowledged that there's no backstory for the characters and the don't know how they know each other, is pleasantly weird, and it makes the sketch. ("Is Claire real?" one of them asks at one point.)

The last sketch of the evening also subverts expectations of Hemsworth's hotness. It starts off at a Chippendale's-style club, so you'd believe that the sketch will be just an excuse to marvel at the actor's muscles. Instead, it comes out that the dancers are really bad at stripping, and instead NYU performing arts students intent on putting on a Broadway-style routine with no nudity. It's another sketch that teases Hemsworth's hotness, but turns out to be really goofy instead.

Is this the type of meta humor we're going to get from Hemsworth in next year's Ghostbusters movie? It certainly wouldn't be a bad thing.