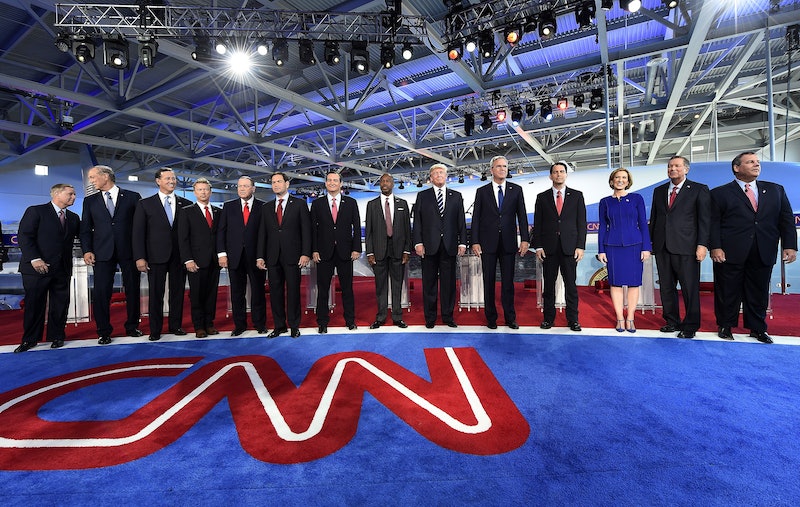 On Sunday, CNN presented its lineup for the final installment in a series of Republican presidential primary debates preceding the Iowa caucuses. We know Carson, and Rubio, and Christie, and Kasich; Comet, and Cupid, and Donner, and Blitzen, but can anyone recall the four who have remained by-and-large unseen throughout it all? They are none other than former Arkansas Governor Mike Huckabee, former Pennsylvania Senator Rick Santorum, South Carolina Senator Lindsey Graham, and former New York Governor George Pataki. These four players of the Republican J.V. debate team will go head-to-head-to-head-to-head this Tuesday in one last appeal to the American public.

Just to recap, here is what these four peripherally-relevant candidates are up to in recent weeks...

As evidenced by his latest tweets and quotes mocking President Obama, Huckabee doesn't have a whole lot happening in his world. Unsurprisingly, he remains rather stalwart in his pro-life, conservative politics. However, he has openly disagreed with Donald Trump's sentiments on barring Muslims from the United States, noting:

If you're willing to strap a bomb to the belly of your child to kill Americans, then you're willing to lie about your religion. A ban on Muslims is impossible to enforce because Islamic terrorists will tell whatever lie they can to enter this country to kill more Americans. And it's simply unconstitutional to ban people on the basis of religion.

Unfortunately, Huckabee's own proposition isn't entirely dissimilar to Trump's; he plans to suspend all visas for travelers from any country with significant ISIS or al Qaeda presence, followed by a rejection of all Syrian refugees. It chalks up to part-misguided Constitutional concern, part-dislike of Trump's popularity. At least most can agree on the latter.

Well, according to National Review and other conservative outlets, Bill Clinton told a biographer all the way back in 1997 that Santorum's wife had a late-term abortion in the 1990s. (Clinton's camp hasn't commented.) How Silly Billy would know such a thing is another question for another day, but Mr. Santorum is out to defend his wife's honor — because, like, abortion is clearly akin to murder, right? At least it is for staunch pro-lifer Santorum; after all, the man's entire platform is seemingly contingent on pro-life politics. In any case, he sounds almost resolved to drop out of the race for president, telling National Review:

Sometimes, sitting in the corner with nobody beating up on you, nobody smashing into you, can be a very good place to be. And it was four years ago and we'll find out whether it is this time.

Doubtful, Mr. Santorum, but you do you.

Ah, the gentle presidential flower of the Old South, where have you gone? Apparently, to defend President Obama? Yes, it's true; Lindsey Graham asserts to the Boston Herald Radio that Donald Trump is leading in the polls because 40 percent of the Republican primary voter believes President Obama was born in Kenya and is a Muslim.

There's just a dislike for President Obama that is visceral. It's almost irrational. ... I can promise you that Hillary Clinton will clean his [Trump's] clock.

This explains why scarcely a word from Lindsey Graham has made major headlines. He is dangerously observant, leaving the Republican Party open to criticism, and nobody likes that.

What even happened to George Pataki? As it turns out, no search party is necessary. He only missed the deadline for the Virginia primary. According to the Virginia Department of Elections, he was the only candidate, Democrat or Republican, to miss the 5 p.m. cutoff on Thursday. Perhaps he is attending the final debate just for fun.

In any case, like Huckabee, he also admonished Donald Trump's highly-contentious statements about Muslims and stated he would refuse all Syrian refugees — so, if he decides to drop out, at least that angle is covered. Pataki will reveal his truth, along with the other candidates, in their final debate on Tuesday.