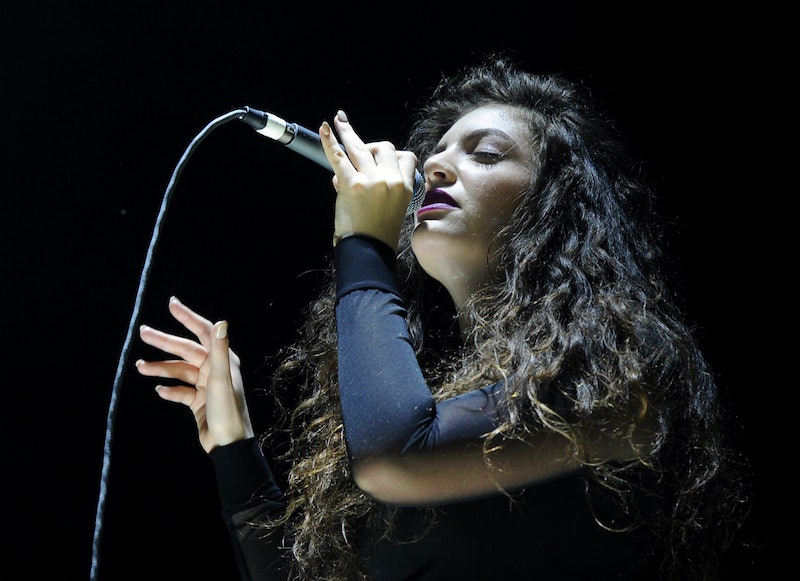 Without a place in the Best New Artist category at the 2014 Grammys, Lorde's best chance at a big award Sunday is in the Record of the Year category, in which she's nominated for her mega-hit "Royals." She's also nominated in three other top categories, including Best Pop Vocal Album (for Pure Heroine) and Song of the Year (for, again, "Royals"). But winning may not be her best bet.

Because many Record of the Year winners were never to be heard from — at least not on the grand scale that originally won them a Grammy — again. Much of this, of course, has to do with the nature of the award. "Record of the Year" has come to mean "ubiquitous song you couldn't escape this year," hence the 2014 nominees "Blurred Lines" by Robin Thicke, "Radioactive" by Imagine Dragons, and "Get Lucky" by Daft Punk.

Many acts already solidified in the music industry have won the award in the past and seen only their hit single be shuttered off from society — U2's "Beautiful Day," Coldplay's "Clocks," and Celine Dion's "Me Heart Will Go On" are sitting somewhere in overplayed music hell, but all three acts have managed to emerge unscathed. (Even if unscathed means "playing sold-out Vegas shows until the end of time" for Dion.)

But then there are the promising newcomers who previously picked up the Record of the Year prize — the Shawn Colvins and Gotyes of the industry. (Unlike Lorde, Colvin had a foothold in folk music before her grand Grammy debut, but as far as mainstream music listeners knew, she was brand-spanking new.) Consider the fact that the "Sunny Came Home" and "Somebody That I Used To Know" singers failed to follow up their award with another big hit, and things start to look a little less promising for young Lorde, should she take the title.

After enjoying the Platinum success of the album beloved at the 1998 Grammys, Colvin's subsequent releases saw even poorer chart performance than her early albums and far less attention even within the folk music community. She was still able to make music, but not on the scale that "Sunny Came Home" allowed. She peaked in 1998 and everything after that was a downhill roll.

And last year's winner, Australian singer Gotye, faces a similar fate — at least in the U.S. His single "Somebody That I Used to Know" was played all over the world before it reached the U.S., and when it got here, it enraptured us for months leading up to the relatively unknown artist nabbing the Record of the Year golden gramophone. Since that happened, Gotye's attempted second single "Eyes Wide Open" failed to make an impression, despite its debut on SNL, and instead Gotye and his well-worn pop song are nearly forgotten.

The award doesn't often go to lesser-known or newly famous artists — names like Eric Clapton, Bette Midler, Whitney Houston, and Adele pepper the historical list of winners — and when it does, it can be something of a death knell to their careers.

Still, Lorde stands the chance — even if she wins — to surpass this obstacle. She's already released two other singles, "Team" and "Tennis Court," which haven't reached nearly the height that "Royals" has. (At one point, it beat out Miley Cyrus' "Wrecking Ball" for the No. 1 slot.) And the album itself, Pure Heroine, has reached No. 2 on the digital album charts. It's possible that winning this award could pump up the PR on her other singles — one of which hit a respectable No. 11 peak — but the danger still remains.

Record of the Year, when handed to a newbie, does not often bestow the power one might hope — that power needs to come from the artist and not the Grammy. Lorde has a much better set-up than say, Gotye, but then again, so did Colvin. And while the 16-year-old New Zealander has grabbed audiences with her unique approach, demeanor, style, and outspokenness, so did Lady Gaga once upon a time before general interest in her antics waned.

All that said, the award itself will not necessarily doom Lorde. Lucky for her, "Royals" didn't reach ultimate power until the last quarter of 2013, so we're not yet up to our eyeballs in it just yet, which is — strangely enough — all the more reason to keep this talented lady as far away from that Grammy as possible. Give it to "Get Lucky" or "Blurred Lines" so that the entirely catchy, yet increasingly tired songs may spend the rest of their days among such overplayed ballads as "Kissed by a Rose" and "Boulevard of Broken Dreams."

We all know how little artistic clout a Grammy actually has these days — we were this close to The Black Eyed Peas taking Record of the Year for the vapid, grammatically-challenged pop anthem "I Gotta Feeling" in 2010. Why root for Lorde to take home such a meaningless trophy that for has spelled instant doom for other new artists "lucky" enough to receive it? Instead, let's hope she bypasses the potential hazard, has a great night at the Grammys, and becomes inspired to write multitudes of songs that blow our minds for that second album of hers. A Grammy should never be the crowning achievement in the place of a long, successful career — besides, if the Baja Men could get their hands on one, how special can they really be?