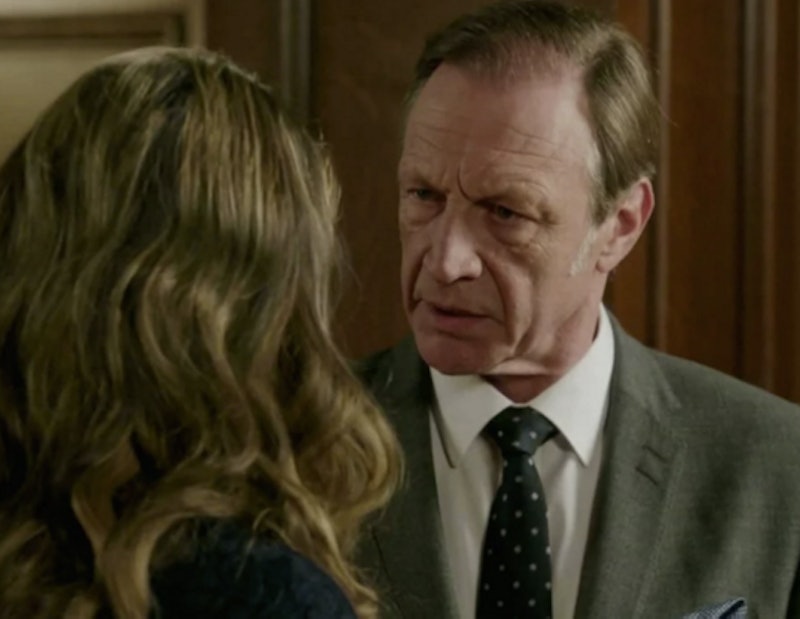 If you thought The Royals would give you answers during the Dec. 13 episode, "The Spirit That I Have Seen," about whether or not head of palace security Ted Pryce actually killed King Simon, you were dead wrong. Instead of explaining or confessing, the only thing Ted did was have Lucius admit to the murder of Simon. While it still hasn't been confirmed if Ted definitely killed Simon, Lucius most certainly didn't stab the king and now the wrong man is in custody.

Lucius is a menacing man, but he truly loves the monarchy. Yet when Helena confronted him about Captain Alastair Lacey being missing, Lucius told her he was responsible for his death and she had him arrested. (Although the show never showed Lacey's dead body, so I'm not convinced Helena's love is actually dead.) As Lucius was waiting to be taken away, he told Ted that he had no purpose in life anymore if he didn't serve the royal family. Lucius was going to kill himself right then and there, but instead Ted convinced him to take the blame for Simon's death so that the country (and Helena, Eleanor, and Liam) would be able to move on and stop mourning.

Lucius decided to serve the queen he betrayed one last time by lying about stabbing Simon, which means the heat is off of Pryce — for now. Helena is smart enough to know that Lucius didn't actually kill her husband and while she told her children the lie, she might get suspicious of her security head since Pryce's actions in "The Spirit That I Have Seen" definitely make him look guilty.