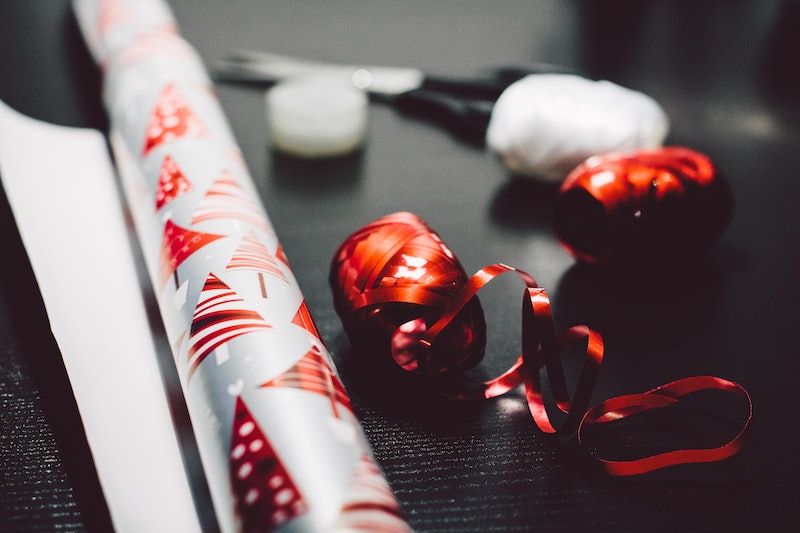 Mariah Carey can sing that “all I want for christmas is you” as much as she wants, but there’s no denying that a stack of beautifully wrapped presents underneath the Christmas tree sends us into fits of joy. An unwrapped gift seems almost naked, but have you ever wondered why we wrap gifts? Yes, the anticipation of opening a decorative box tied up with ribbon adds to the holiday excitement, and having shiny paper of all colors and designs seems to make the experience more festive. But why is it that if you give the gift in the box that it came in, receiving it feels a little less special? Whether you enjoy the visceral elation of ripping open the paper, or the quiet anticipation of carefully peeling off the tape from the creases to reveal what’s inside, wrapping paper makes the gift-receiving experience whole.

After the holidays are over, we are left with several trash bags loaded with the crinkled shiny paper. And that’s a lot of waste. The gift wrap industry is booming, and all that printed paper and holiday gift bags creates four million tons of trash. Thankfully, most paper today is made out of post consumer waste, but approximately 30 million trees are cut down to make wrapping paper each year.

As we become more environmentally aware and expand our "paperless options," is all the gift wrap waste worth it? In a way — yes. A 1992 psychological study tested whether the wrapping of the gift influences the recipient to have a more favorable attitude to owning the item inside. Those who received wrapped gifts, rated their gift more favorably, and nicely wrapped presents were favored over unwrapped or "non-traditionally" wrapped gifts. Dr. Howard, who led the study, explained: "Gift wrapping, through repeated pairing with joyous events in people's lives, has utility in cuing [sic] a happy mood which, in turn, positively biases attitudes." Hence, wrapping gifts brings back happy memories thus putting us in a happy mood!

The art of gift wrapping has been around for centuries. Its origins are in Asia, where the first bits of paper date back to Ancient China in the 2nd Century B.C. In the Southern Song dynasty (960 to 1279), gifts of money were distributed to government officials in envelopes called "chih poh." This wrapping paper was made of hemp, bamboo fibers, and rice straws. In Japan, the traditional reusable wrapping cloth called the "Furoshiki" has been around since the Edo period (1603 to 1867). And in Korea, the "bojagi," a traditional wrapping cloth made of silk, is said to have been around since the Three Kingdoms period (57 B.C. to 668 A.D.).

In the West, elaborate gift giving was slow to catch on. The Christmas card was developed in 1843, and became a burgeoning industry in the 1860s. The art of Christmas cards led to the development of decorative papers to accompany them. "Victorian Christmas papers were intricately printed and ornamented with lace and ribbon. Decorated boxes, loose bags, and coronets bore cutout illustrations of Father Christmas, robins, angels, holly boughs and other seasonal decorations," explains Encyclopedia.com. And improvements in printing methods in 1890 allowed for consistent printing of stiff wrapping paper on a greater scale. But most elaborate gift giving was still reserved for the upper-class elite.

We can thank the Hall brothers, of Hallmark fame, for modern gift wrap. During the 1917 holiday season, J.C. and Rollie Hall, who ran a stationary store in Kansas City, had a bit of a problem. They sold out of the red, white, and green tissue paper early that was the standard decoration of the time. To fill the void, they brought decorative French paper which was traditionally used for lining envelopes from their manufacturing plant, and sold it for 10 cents a sheet. They sold out quickly, and the next year to capitalize on their luck, they sold the sheets at three for 25 cents. Again, the positive response was overwhelming. In 1919, Hallmark began producing decorative wrapping paper, their first departure from the greeting card industry. Thanks to the Hall brothers' quick thinking, gift wrap is a 3.2 billion dollar industry today. So put that in your Christmas stocking!

More like this
Is The Insta-Famous Always Pan Actually Worth It?
By Jessica Goodman
60 Gifts That Are Selling Out On Amazon Because They're So Freaking Clever
By Allison Bolt
The Cabincore Home Decor Trend, Explained
By Jessica Goodman
The Guide To “Witches Stairs” & Why They’re Actually Great For Small Spaces
By Emma Garza
Get Even More From Bustle — Sign Up For The Newsletter