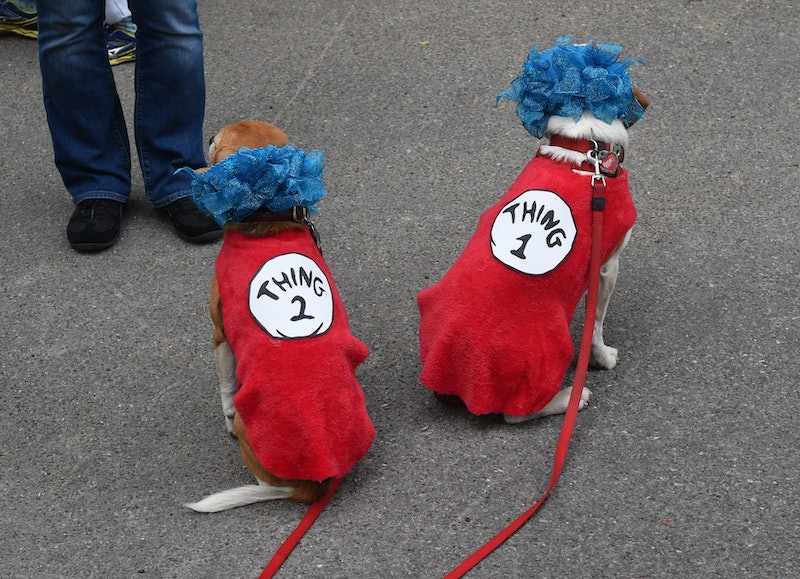 As a child, you probably spent a lot of time giggling over the idea of green eggs and ham, words like "truffula" and "Sneetches," and the antics of a particular cat in a distinctive red and white top hat, and you've probably never needed to ask yourself why you loved it. However, it's possible scientists have found what makes Dr. Seuss so funny. Though personally, I've never felt the need to analyze why something is hilarious — isn't it enough that it is? Still, if we are going to study humor, Dr. Seuss can definitely teach us all a lot!

Chris Westbury, a psychology professor at the University of Alberta, first got the idea while running a study in which participants were asked to distinguish real words from made up ones on a list. There was one "word" that virtually everyone laughed at: "snunkoople." Once the study was over, Westbury decided he wanted to find out what made "snunkoople" so funny. And of course, this led straight to Dr. Seuss — and also, surprisingly, to the German philosopher Arthur Schopenhauer.

Schopenhauer is famous for several things, including being the first person to articulate an idea called “incongruity theory,” which postulates that people find things funny because they run counter to our expectations. Words and events that defy our preconceived notions and take us by surprise make us laugh. But how do you quantify the unexpected in order to study it? Well, in his new study, published in the Journal of Memory and Language, Westbury decided to draw on theories of entropy and the mathematical understandings of how ordered something is.

I know — German philosophy and entropy don't exactly sound Seuss-ical, but apparently, it's all connected.

Westbury and his fellow researchers ranked the made up words in their study based on the amount of entropy, or disorder, the words exhibited, factoring in how much they deviated from standard traits of English words. Words that contained lesser-used letters or contained unusual letter combinations, for instance, were higher in entropy. Participants in the study were asked to rank the words from 1 to 100 based on how funny they found them. And, just as Westbury hypothesized, words that were higher in entropy were also rated as funnier. And when they ran 65 words invented by Dr. Seuss through the same formula and procedure, they found the same results.

In other words, this Canadian professor may have just cracked the code of Dr. Seuss using math.

Dr. Seuss (whose real name, of course, is Theodore Geisel) and his books have been beloved for generations — by both children and adults. Dr. Seuss books have become movies and TV shows, and even found their way into politics in rather bizarre ways. People still freak out over the idea of a Dr. Seuss museum or a newly discovered Dr. Seuss book. Because of course we do — the man was genius and his work is superb. Which is why it's strange to think of trying to explain it with a mathematical formula.

But, of course, that's not really what Westbury and his colleagues are doing. You can't reduce Dr. Seuss's success down to something as simple as providing audiences with the unexpected. If that was all there was to it, any fool with a random word generator and a penchant for using eccentric colors in illustrations could gain the same success. Dr. Seuss's work endures not just because of funny words or unexpected plot twists, but because they resonate with something that's not just funny but also genuine and full of wonder and just generally excellent.

Still, if researchers want to use Dr. Seuss and his work to help understand how humor works, I don't have a problem with that. After all, if you're going to try to figure something out, it helps to learn from the master!