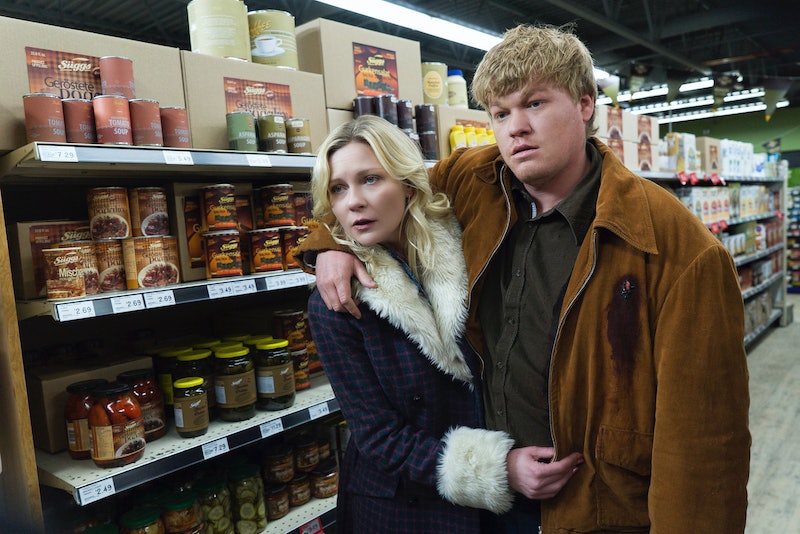 Stories — when told well — usually make a lot of sense. Writers spend hours upon hours toiling in front of computers, crafting a narrative where all the characters have clear motivations and have a set of traits that will either help or hinder their quest to achieve their goals. This is very different from real life, where many times things aren't as cut and dry. Someone's motivation for doing something may not be clear, or may not seem rational. Someone's quest to achieve their goal can be affected by outside forces completely unrelated to the person's traits or character. While sometimes including elements like these — odd circumstances that affect the story that aren't caused by the story — can be a trademark of a poorly-constructed narrative, the writers of Fargo doubled-down on the reality of their "true story" by including absurd and nonsensical elements to craft an odd, uncertain crime narrative that manages to be the one of most realistic crime stories ever told that speaks to what it means to be alive.

The writers of the Fargo television series make no attempt to hide their interest in the absurd, leaving clues to their influences in their episode titles. Almost all of the second season's episodes refer to famous works of absurdism. Season premiere "Waiting For Dutch" is a play on Samuel Beckett's famous absurdist play "Waiting For Godot" that you were supposed to read in high school ("Dutch" is a reference to Ronald Reagan, who was on a presidential campaign during the time period in which the story takes place). Other episode titles refer to famous Absurdist authors like Franz Kafka ("Before The Law," "The Castle"), Albert Camus ("The Myth Of Sisyphus," which Noreen is seen reading in the series), and Eugène Ionesco ("Rhinoceros"). Absurdism, as a philosophy, boils down to the idea that human beings exist in a "purposeless, chaotic universe." The absurd, chaotic elements of life are usually washed away from narratives hoping to create a clear, concise story with a clear moral. Fargo, however, embraces the pointlessness and strives to work within it.

When recalling the Sioux Falls massacre in the first season, Lou Solverson says he would call the slaughter "animal — except animals only kill for food. This was—" before being unable to find a word to describe the horrors he saw. We would later learn what was so indescribable about the event, and it wasn't merely the amount of blood and carnage. When an alien ship shows up during the climactic shootout that Season 2 has been leading up to, it might seem like the writers of Fargo are just messing with the audience. There have been whispers and references to UFOs all season, but it may seem ridiculous that a realistic crime drama would actually show a close-up view of an alien ship that interrupts the most violent shoot-out in the series so far — And that's because it is riduculous. It's supposed to be, it serves as a re-statement of Fargo's thesis that life is just as difficult to understand and comprehend as death.

The UFO's appearance is not the first time that Fargo introduces something ridiculous to its story — In the very first episode of the season, a woman puts herself through the horrific trail of driving home with a man lodged in her windshield for reasons unknown. Over the course of the season that follows, there are pointless deaths (Dodd accidentally killing one of his own men), pointless tasks (Betsy taking the placebo), and pointless decisions (Detective Cheney and company deciding to turn off their police scanner when hiding in the Motor Motel). These events reflect not just the chaotic, random philosophy that the writers have attached to Fargo, but also the odd little details of life itself that happen to pop up in real crime stories.

The key element of absurdist fiction that Noah Hawley and the writers of Fargo use is the sense that life is not dictated by choice or destiny, but that life is beyond the control or understanding of any human being. While Fargo doesn't reach the heights of some of the more out-there elements of absurdist fiction — at no point do the citizens of a small french town start all turning into literal rhinoceroses — the show still borrows the sense of randomness and meaninglessness that characterizes not just other great works of absurdist fiction, but of true crime as well.

The Friday before the Season 2 finale of Fargo, the internet rejoiced at the return of Serial — the true crime podcast sensation that swept the nation during its first season. It seemed everyone on Earth was asking the same questions — "Did Adnan Do It?" "What Is The Deal With Jay?" " What Exactly Is MailKimp?" — and trying to make sense of things that didn't make sense. The inefficiency of bureaucracy is a common theme in Kafka's absurdist work— unclear motivations and random happenstance (a man just happened to find the hair of a deceased body sticking out of the ground while going into the forest to urinate?) When the season ended, listeners were no closer to knowing what exactly happened.

HBO true-crime mini-series The Jinx also ends in a similarly absurd way, with Robert Durst admitting to his crimes not in a tearful on-camera confessional, but by accidentally leaving his mic on and bragging to himself in the bathroom. Absurd moments like this populate not just true crime, but many true stories. Attempting to find meaning and reason in stories like this can often result not in clear answers, but with an anti-climactic acknowledgment that we don't really know anything.

All throughout the season, characters are trying to make sense of the world. Lou Solverson is trying to suppress crime and make the world a better place for his daughter, however — much like Sisyphus, no matter how much Lou does to keep crime at bay, either more crime pops up or his fellow officers make it difficult for him to do his job. Ed Blomquist wants to buy the butcher shop and be his own boss, the true American Dream — however the meat shop burns down in a fire. Betsy Solverson wants to live, but her pills are just sugar. Only one person comes to terms with the absurdity of the world, and the fact that nothing makes sense — Peggy Blomquist.

The surprisingly powerful beautician may not seem like a great role model, but her acceptance of the nonsensical nature of life may be exactly why she stayed alive so long. When Peggy begins the season, she's in over her head with magazines and spending great sums of money on self-help seminars, seeking to discover what she should be in an attempt to reach self-actualization. Eventually, she realizes that she doesn't have to strive to be something — she just has to be something. Once she is freed from the limitations of a reliance on material things and no longer bound to the idea that self-fulfillment is easily available, she becomes the happy-stabbin', gun-toting, fierce power that she always was. Once Peggy realizes that she can never win the fight to make herself be better, she "actualizes" and becomes the most powerful character in the show.

During the shootout in Sioux Falls, everyone gets distracted by the massive UFO that has descended on the scene — except Peggy. Peggy reminds Ed that "It's just a flying saucer," and continues to run away from Hanzee. Peggy has already realized that life doesn't make sense, so it doesn't shock her when something this absurd happens. No one can achieve happiness, and large numbers of people die for no reason — the realization that UFOs exist is far from the most absurd thing Peggy has realized over the course of the season.

So, what is Fargo trying to say with all this? Is Fargo simply a 10-episode manifesto of the concept, "Nothing matters and we're all going to die, so don't bother?" Fargo seems to have a more positive outlook on life than that. We know that years after participating in the Sioux Falls massacre, Lou Solverson settles down and opens up a diner. Perhaps Lou discovered that he cannot stop the pointless and chaotic cycle of death and misery that populates the world, so he dedicated the rest of his life to something that mattered to him: Tasty burgers and a good milkshake. Peggy realizes that becoming the "ideal" woman through magazine and self-help seminars isn't important, but gaining power and keeping her husband alive is.

Fargo isn't just saying that "nothing makes sense, everything is random." Fargo is saying that "nothing matters — which is why everything matters." Fargo makes the argument that the only way to truly become yourself is by abandoning any ideas of the universe operating in terms of destiny or logic, accepting the pointless and chaotic nature of existence, and learning how to operate within it. In acknowledging the randomness of life, Fargo manages to not just be one of the most philosophical crime stories of all time, but also one of the most realistic. Things happen that are completely beyond our control, and things will always happen that try to prevent you from achieving your goal. The only thing anyone can do is accept it, acknowledge it, and move on. It's then, and only then, that one can truly be "actualized."