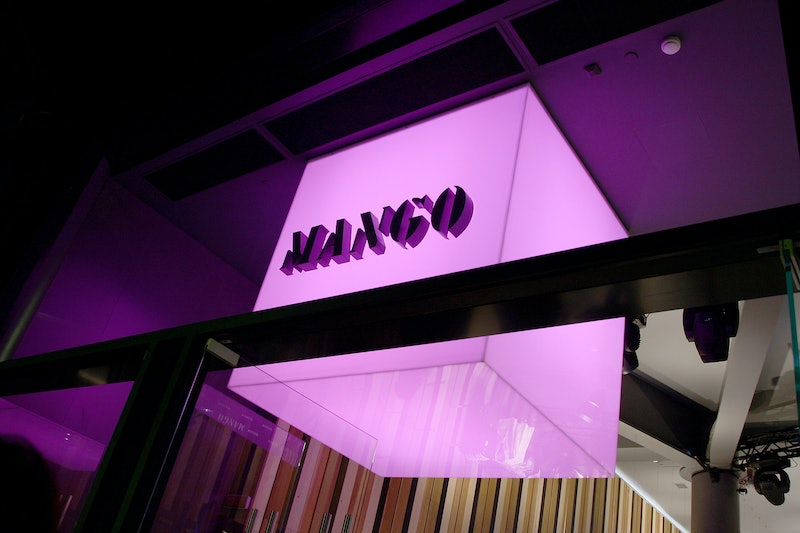 About a month ago, Spanish fashion brand Mango announced the launch of their plus-size line, Violeta. For the most part, cyberspace seemed pleased. Mango is loved for its range of durable, well-made workwear, casualwear, and eveningwear, so the fact that the brand's fashions would be available to a broader range of bodies was largely received as good news.

It turns out, though, that people are pretty fickle with their emotions. Once the line was released, some unhappy people claimed that Violeta was promoting an unhealthy body image by categorizing any woman size 8 or above as plus sized. People have taken to social media in fury, saying that Violeta makes average-sized women seem big, and thin women feel discriminated against (because Violeta will not carry their sizes). There's even a petition circulating for the line's withdrawal. The Daily Mail summed it up: "Mango has been accused by shoppers on Twitter of stigmatizing women larger than a size 10, and even encouraging eating disorders."

Violeta's range is a U.S. 8 to 20, and obviously the lower end of these sizes aren't big — they're distinctly average. But regardless of how certain sizes are categorized, it's true that Violeta is doing something pretty outstanding by increasing its size range, making its stylish clothing available to a variety of bodies when so many higher-end brands are still refusing to do.

And Mango isn't the first company to categorize "plus-sizes" at a low number. Torrid starts at a 12. Simply Be at a 10. Mynt 1792 at 12. And so on and so on. Someone a long time ago (not Violeta) decided 10/12 was where straight-sizing ended and plus-size began, which is probably why mainstream brands don't carry anything higher. Been to Topshop or Urban Outfitters or most H&Ms lately? They stop at a 12.

As far as the "promoting eating disorders" claim goes, Mango is doing the opposite by launching Violeta. It isn't saying "Women who are over an 8 are fat," but rather, "High-quality, stylish clothes shouldn't just be available to the 0s and 2s of the world." If giving larger sizes the same options as smaller ones promotes eating disorders, then are curvier women simply supposed to not have those options? What is the alternative here?

I understand the frustration at being labeled plus at size 10 or 12, or even 14 or 16, because honestly, those sizes are about average, and when we factor in height as well, people that wear those sizes very well may be of a perfectly reasonable, healthy weight. But if we are going to discuss the glamorization of eating disorders, the blame should lay more squarely on the shoulders of those brands using 6'0", 100-pound women approaching emaciation to advertise their clothing — not brands that are welcoming a plus size customer and using models that are of a more normal (though still enviably slender) body type. Or on horrific "manosphere" blogs that shame women into losing weight, or on Urban Outfitters' for their "Eat Less" tee, or on people who fat shame gorgeous, healthy celebrities.

The problem isn't Mango — it's how we perceive size, beauty, and the fact that somewhere down the line we decided being a 10 or 12 meant you didn't deserve to shop the mainstream because it's your fault you're big in the first place.

Regarding the clothes themselves — alright, they're not groundbreaking. But they aren't as bad as Twitter outrage would have you believe. As Fashionista pointed out, there is a bit of an issue with the elastic waist situation, but that is hardly emblematic of the whole line. There are some pretty sexy leather pants, some rockin' blazer-esque coats, cute denim dresses, body-hugging jeans. Yes, there's a lot of beige and a lot of black, and these colors don't exactly scream sexy or confident, but Mango has always been aimed at the working woman, anyway. And did you catch the leopard print pants and biker jackets?

It seems there are two options here. People either need to get over their negative stigmatizations of the word "plus-size" and realize it's just a term used for easy categorization of a certain size in fashion, or conversely, we need to do away with the concepts of "straight" and "plus" and let women just be women, and fashion just be fashion. For the latter to happen, it's going to take every brand in the world to join together and mutually agree to cater to women of all sizes. For the former to happen, people just need to realize being labeled "plus" isn't such a bad thing. I want to have faith that people will opt for this option, and allow a great brand to succeed. But we all know there's only so much faith to be had.