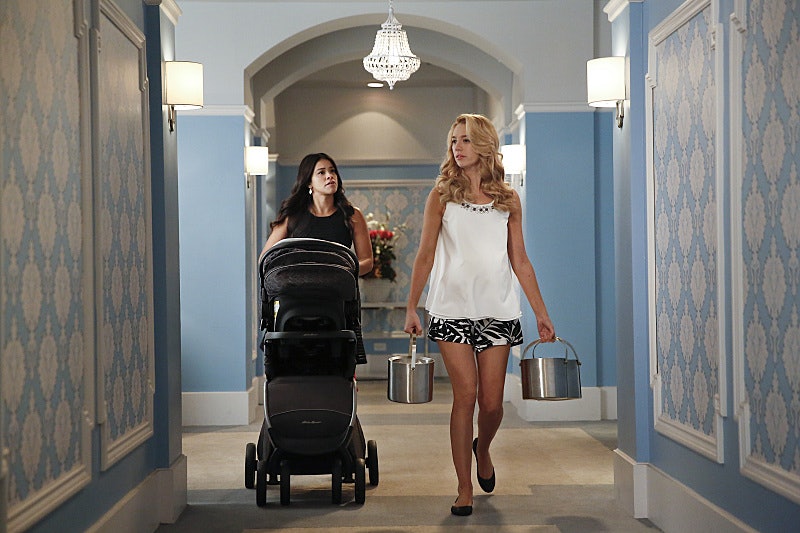 This is just my opinion, but covering up a murder seems like a lot of work. It's stressful and tedious and just not a good time in general, which is probably a few of the many reasons why the act tends to be frowned upon. And no one has been feeling the stress of it more than Petra on Jane the Virgin . This poor girl spent the majority of the episode bleaching Ivan's blood off the floor with her crazy killer of a mother. (Not exactly the family bonding scenario generally associated with Christmas.) But just in case that by itself wasn't enough, the Jane the Virgin midseason finale made sure to add another shocking twist to this insane storyline by having Petra get arrested for Ivan's murder.

Apparently, Petra's mother could sense that her daughter's loyalty was wavering and that she'd eventually turn her in for the crime. So Magda decided to beat her to it and say that it was Petra who killed Ivan and not her. (Throwing your own pregnant daughter under the bus for your sins has to be a new low for this character, right?) And the real kicker is that Petra had just confessed all of her and Magda's wrongdoings to Rafael. In fact, the two of them were just about to call the police and have her mother arrested. But as usual, Magda's vindictive mind was already two steps ahead of them.

Petra has been trying to be a better person all season, so it's heartbreaking to see her come so close to redemption only to end up in the slammer as a result. Rafael even told her that he felt like he understood her better after knowing all of this. Maybe the two of them could've even made a second go of their relationship now that all her cards were out on the table. But now she has bigger things to worry about these days — like the Big House, for instance.

So, will Rafael be able to get Petra released? Will Magda really let her daughter rot in jail? Will Petra continue to be haunted by Dead Ivan or has her guilt been washed away after her confession? These are all questions we'll have to wait until Jan. 25 to uncover. Let's just hope Petra has better luck in the New Year.