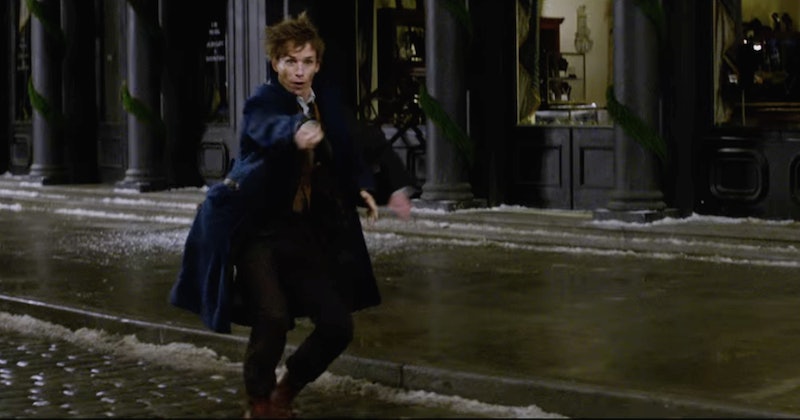 The world is in an uproar now that the Fantastic Beasts and Where To Find Them trailer has been released. Giving us the most we've seen of Newt Scamander and the Magical Congress of the United States of America so far, the trailer shows a very basic rundown of the established synopsis, as well as a look at some characters that I can't wait to get to know. However, once you've watched the trailer for, oh, say, the ninth time like I have, you start to notice some subtle nuances. There are many little details in the Fantastic Beasts trailer that you'll probably only pick up on a re-watch, and it's practically my job to point them all out to you. After all, I've been a fan of Harry Potter for so many years that it's kind of a given these days that I'll read too much into anything J. K. Rowling puts out. I used to write essays on Harry Potter before anyone ever paid me.

That being said, not very many of these below details are speculation. Everything below is something you can see with your own eyes while watching the trailer, with only one standing out as being mostly conjecture on my part. The attention to detail, and the nods back to the original Harry Potter films, are too real for me to start making stuff up just because this is a magical world. Take my hand, and come and learn a few things about the movie we're all going to obsess over this time next year.

1. That Harry Potter and The Prisoner Of Azkaban Throwback

The trailer opens with a pitch black screen, in which Newt Scamander is casting a Lumos Maximos spell that goes on and off. This is exactly the same way Harry Potter and the Prisoner of Azkaban opened, with Harry casting repeated Lumos Maximos spells in the night so he could do his homework while at the Dursleys' house. (Which is probably why he really got in trouble with the Ministry for using underage magic, so now we know that was not actually Dobby's fault at all.)

Fantastic Beasts takes place in 1926. Which, yes, was after the Civil War that resulted in the freedom of all the slaves, but before the Civil Rights Movement that brought about somewhat of an end to overt forms of racism. Considering 15 percent of the nation's population was a member of the Ku Klux Klan by the mid-20s, the fact that Seraphina, an African-American woman, occupies what is clearly a high position in the MACUSA pretty much shows that the racism in the wizarding world has always been confined to Purists vs. Muggleborns, rather than extending to skin color.

3. That Growl Sounds Kind Of Familiar

Is it just me, or does the growl that we hear when Newt opens the trunk sound a lot like the roar of a basilisk? That, combined with the fact that one of the backdrops for the title cards looks like scales, as does one of the letters in the logo, and I really think New York is about to see some basilisk action 'round here.

4. The Return Of The Undetectable Extension Charm

According to Tina, Newt Scamander came to New York with a case containing magical creatures. That case doesn't look anywhere near big enough to carry anything but maybe a nest of pixies. To that end, I think the Undetectable Extension Charm Hermione Granger cast on her bag in Harry Potter and the Deathly Hallows — Part 1 and that Mad-Eye Moody had on his seven-part trunk in Harry Potter and the Goblet of Fire may have been at work here. It's a nice nod back to the original series.

As pointed out by Pottermore, the symbol behind Seraphina in the MACUSA? Yeah, it has 48 stars on it. While the U.S. had acquired Arizona as the 48th state in 1912, the country didn't acquire Hawaii and Alaska until 1959. Nice.

6. They're Pretty Lax On The Statute Of Secrecy

Here we see Newt performing magic openly on a New York street with a No-Maj (American Muggles) right behind him. Either Jacob has some special connection to the wizarding world by now, or American wizards don't care about upholding the International Statute of Wizarding Secrecy, like, at all.

In 1926, there was a sharp societal divide between the more traditional, usually older women of previous decades and the more rebellious, usually younger women who were bobbing their hair and shortening their hemlines. Tina's hairstyle in this shot could indicate that she's a flapper, as short hair was considered a boyish form of rebellion during the 1920s. That would seem to go against the character traits she displays in this trailer, so perhaps there's much more to Tina than meets the eye?

Watch the trailer again below.