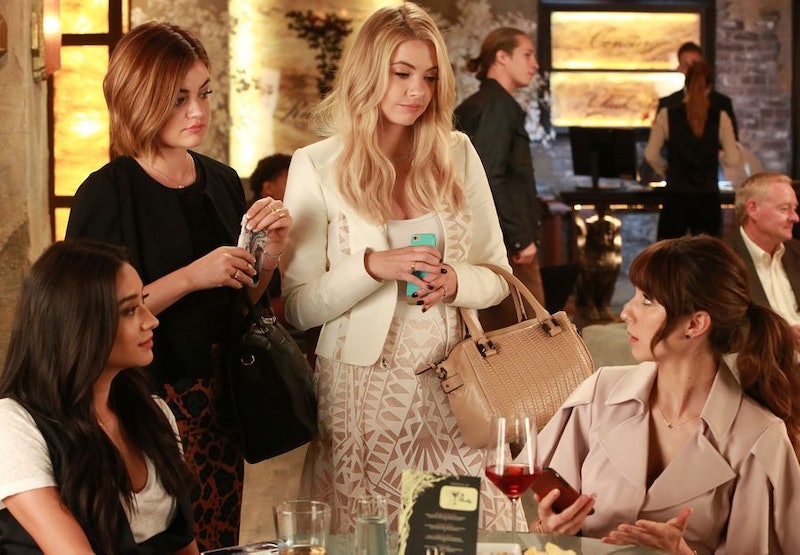 We still have a few weeks to go before the Pretty Little Liars Season 6B premiere, but that isn't stopping ABC Family from delivering yet another tantalizing teaser for us to obsess over throughout the holiday season. The network has now released an official PLL Season 6B poster, which features our beloved Liars dressed in the most fashionable funeral attire we've ever seen. But that by far isn't the only eye-catching detail you'll spot within this image. All five of the girls (Hanna, Aria, Emily, Spencer, and even Alison) are all carrying a large, black casket with the caption above them reading: "Are you strong enough to carry your secrets?"

Of course, this isn't the first photo of this season that depicts a graveyard-type setting. We've already seen them standing around a car that is overflowing with dirt, which I very much doubt is simply due to poor upkeep. Clearly, these Liars are about to get their hands dirty (perhaps quite literally) in another major secret that will propel their storylines forward and unite them in lies. (Pretty Little Truth-Tellers just doesn't have the same nice ring to it, in my opinion.) So, in light of this latest poster, we obviously have a ton of questions regarding what this could indicate about the upcoming season. Such as...

1. Who's Inside The Casket?

Let's start with the most obvious question, shall we? Given that all five of our main stars are featured on the poster, I think it's safe to say that it won't be any of them. (Thank goodness!) They'll just be plagued to deal with the aftermath, as per usual. (Mrs. D., is that you?) That is, unless the caption implies that the weakest link in the group will be the one to end up in the grave. We could be looking at Darwinism at its finest, my friends.

Mrs. D.'s killer is still unknown, so if it really is her inside that casket, perhaps this indicates that we'll finally get some answers to this particular storyline. Or maybe this is a different dead body entirely and it's the girls who are to blame?

3. Do The Veils Mean Anything?

Aria, Hanna, and Spencer appear to be wearing veils over their faces while Emily and Alison aren't. Is this just a fashion choice or does it indicate that those three are grieving more than the other two? And if so, why?

4. What About Their Positions Around The Casket?

Spencer, Alison, and Emily are all on the same side, whereas Hanna and Aria are holding up their end with just two people. Considering that the caption is all about strength and being able to carry your secrets, maybe this implies that Hanna and Aria will prove to be exceptionally strong characters this season and pull more than their fair share of weight. Sure, it might be stretch, but when it comes to this show every little detail counts.

5. How Are Those Outfits Funeral Appropriate?

I mean, they look amazing, but it's not exactly proper funeral etiquette.

6. Where Are They Taking The Casket?

Are they carrying it to a burial plot or is this a body that needs to disappear without a trace? I need to know, you guys!

Is it January yet?