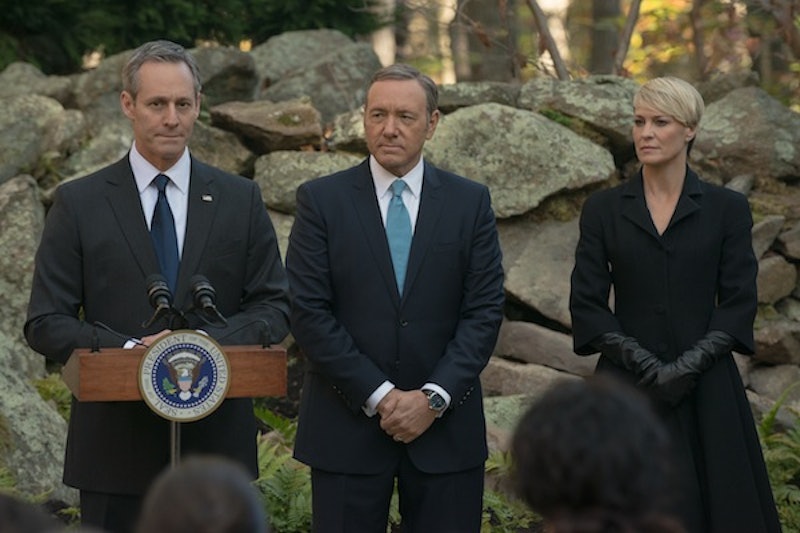 If you’ve been dying to find out what happens after Frank Underwood mutters “Claire” during the last moments of the Season 3 finale of House of Cards , then, political fans, you are in luck. It was announced on Tuesday night — in the middle of the GOP debate, no less — that Season 4 of House of Cards would be premiering on March 4, and the news came just in the nick of time to spark all of our political fervor over the 2016 election: Because if there’s one thing more important than who will become the future president of the United States, it’s the state of Frank and Claire Underwood’s marriage.

Talk about a state of the union.

Fortunately fans will only have to wait a few more months until Season 4 premieres and we can all finally know what’s to come of the Underwoods. After Season 3 of House of Cards ended with Frank and Claire seemingly on the brink of breaking up, fans have been scrambling to hold on to hints and theories from the past three seasons in order to make sense of their crumbling relationship. Will they break up? Won’t they break up?

Thankfully, fans will only have to scramble for a little while longer, because it’s only a matter of time before the Underwoods are back on television and back in our lives. When Season 4 premieres, we will finally find out where our favorite D.C. couple stands. I, for one, can not wait. Especially after Season 3’s intense ending, it’s about time we found out when all of our burning questions about the Underwoods will finally be answered.

Honestly, the only thing with higher stakes than House of Cards these days is the presidential election. So, it was incredibly appropriate that the news of Season 4’s release date was announced in the middle of the GOP debate. I can’t think of a better time to announce when the Underwoods will back (and we can start taking a break from the harsh reality of an election year with the fictionalized drama that House of Cards is built on) than in the middle a major debate like this one.

So pencil this premiere date into your calendar, fans. This is going to be the political event of the year.