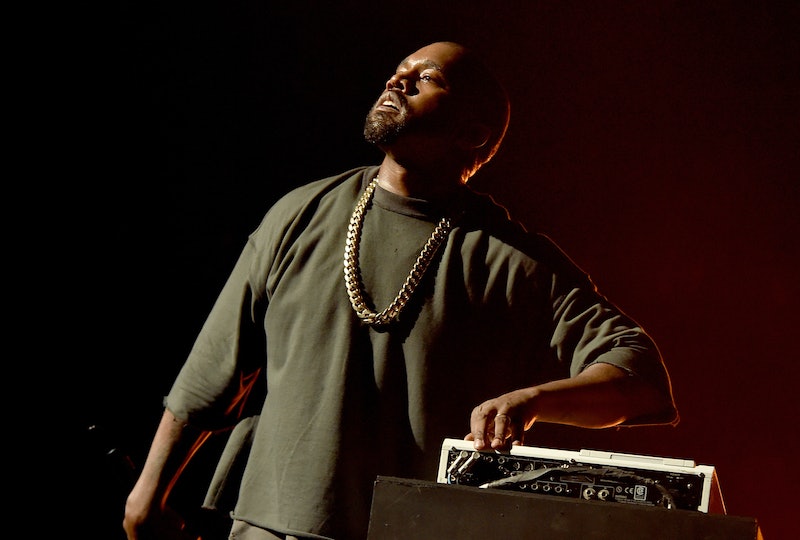 This rapper's family is expanding, and so is his design empire. Kanye is releasing yet another edition of his famous sneakers, and if you're wondering how to buy the black Yeezy 750 Boosts, which come out on Dec. 19, you'll be happy to know that you can snag them at your local mall. Because what would the holidays be without celebrities releasing hot items a week before Christmas?

If you thought your holiday shopping was all done, then think again. With the announcement of Kanye's black 750 Boosts, Christmas lists all across the globe just got a little bit longer. You might remember the grey high-top sneaker from the Yeezy Season 1 runway. That original version is now selling for $3,500 on eBay, but a new version is on its way, so you have another chance to get them at a lower price.

Kylie Jenner has already shown off her own pair of black 750 Boosts on Instagram, so you know tons of people everywhere are going to want a pair. The shoes will be sold in North America and internationally, and are priced at $350, just like his other sneakers, both on-line and in stores. If you're more of a "waiting in line" type, Foot Locker, Champs, and Barneys are among the stores that will carry the 750 Boosts in black. They sneaks are also available at adidas.com for those who feel like shopping from the comfort of the living room.

Like the rest of Kanye's stylish kicks, there's no doubt that these will be sold out before you know it. Even Santa won't snag himself a pair if he's not fast enough. Oh, but don't ask Kanye about it, because he's too busy with his new album.

May the odds be ever in your favor!

More like this
Kim Kardashian Pays Homage To Kanye West’s Fave Film In New Swimwear Pics
By Bustle Editors and Maxine Harrison
Most Comfortable Underwear For Big Butts
By Audrey Williams
11 Graduation Guest Outfit Ideas To Wear To Someone Else’s Ceremony
By Phoebe Avison and Claire Fox
42 Black Owned Fashion & Beauty Brands To Support Today & Always
By Mekita Rivas, Shea Simmons, Kui Mwai and Dominique Norman
Get Even More From Bustle — Sign Up For The Newsletter