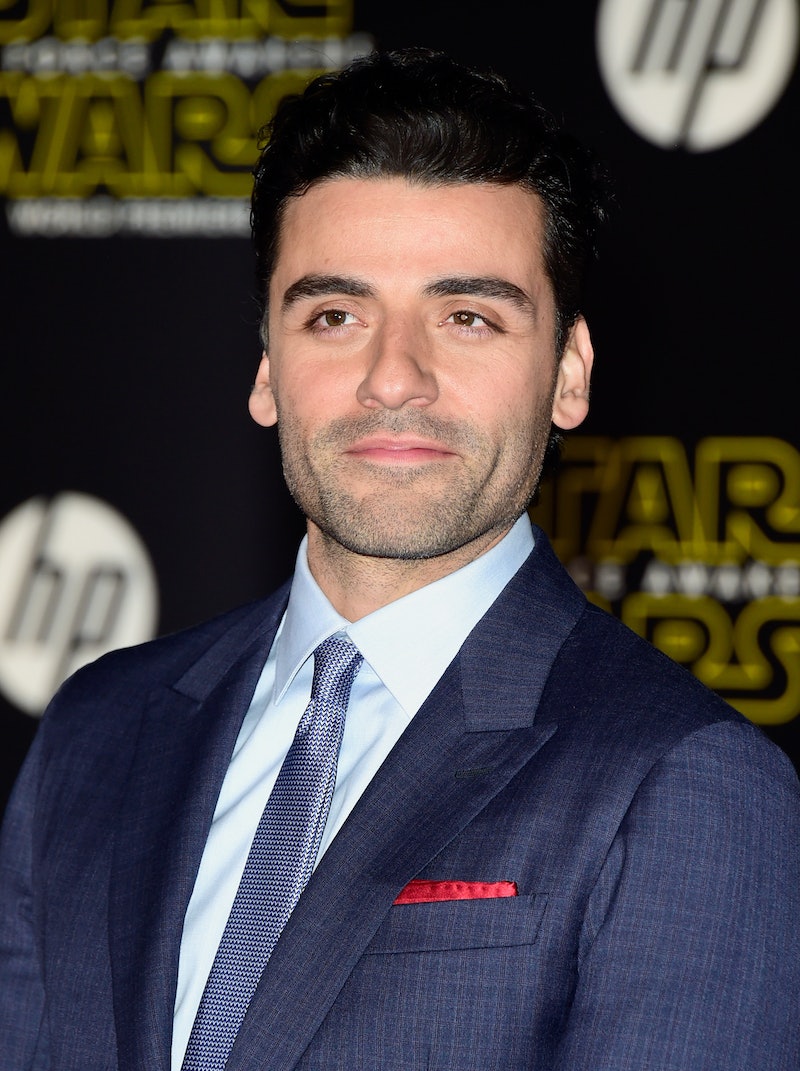 With the upcoming release of Star Wars: The Force Awakens, all eyes are on Oscar Isaac. The Guatemalan actor plays newcomer Poe Dameron in the movie. And that's not all! His résumé keeps growing, since he's set to star in 2016's X-Men: Apocalypse. Because Isaac is in the spotlight, fans can't help but wonder: Is Oscar Isaac single? Well, unfortunately for anyone who's eager for more info about the 36-year-old's love life, he tends to keep things pretty private. By "pretty private," I mean he's incredibly secretive. His last reported relationship was with longtime girlfriend (and supposed fiancé) Maria Miranda. But are these two still engaged? Did they secretly tie the knot? Fear not, Star Wars fans. I did some investigating!

It's worth acknowledging that Isaac really doesn't share much. He has a Twitter account, but has posted zero tweets. Unlike most of Hollywood's elite, Isaac doesn't even have an Instagram account. In a world where the Kardashians document their every move, it's a bit surprising when some stars aren't as open. (Of course, everyone deserves privacy! It just makes it tough for nosey fans.) Even in Isaac's latest GQ profile, the author notes Isaac's caution, writing,

Moreover, he has shown himself to be a lifelong non-joiner and an actor so private about his private life that the mere use of the word girlfriend leads him to try to take it back the next day.

Unfortunately, he didn't divulge any further info. But here's all that fans do know: Apparently Isaac proposed to Miranda back in December 2007. According to a report from the New York Daily News, he proposed in front of Lincoln Center after seeing opera at the Met on Christmas Eve. Could that be any more romantic?! Their source said, "There were a lot of spectators, and he gave her a beautiful handmade diamond ring surrounded by pink sapphires. She said yes — jumping up and down excitedly, and they were kissing."

Since that was nearly eight years ago, many would guess that they've gotten married by now. But in an April 2015 interview with Details, the author writes this about Isaac's upcoming plans, "He has plans for a vacation in Guatemala before he begins shooting X-Men, but apart from spending time with his girlfriend, that's about it." Don't you think he'd call her his wife if they actually tied the knot? I'd think so. It's also worth noting that Miranda's life is equally private; I couldn't even Google her to learn more about who she is or what she does.

Earlier in the year, Isaac and Miranda were spotted walking around New York City near New Year's Eve. In an article from Just Jared, the site refers to Miranda as his "fiancé." Sure, it's just semantics, but if they're saying "fiancé," I don't think it's fair to jump to the conclusion that they're married.

Plus, the fact that in two of his most recent interviews — GQ and Details — Isaac mentioned a "girlfriend" and not a "fiancé" means he could very well be dating someone else. Anything is possible! Meanwhile, fans are pretty distressed about the whole ordeal.

Sorry, ladies! Looks like no one really knows the real answer except Isaac himself.