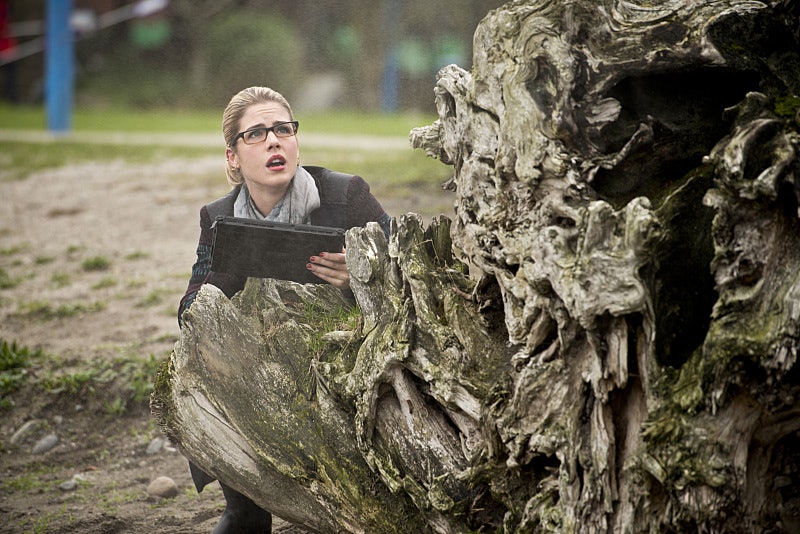 On the whole, one could argue that Arrow Season 4 hasn't been quite as action-packed as previous seasons, but that's because there's been one very big looming threat on the horizon that we've all known was coming — finding out who that Arrow grave belongs to in the six month flash forward. But given everything we just witnessed in the midseason finale, I've become more convinced than ever that Felicity will really die by season's end. Believe me when I say that this decision does not come lightly and that my heart breaks at the mere mention of the possibility. But that doesn't make it any less true.

Oliver and Felicity were more happy than they've ever been on the show in light of their recent (and downright adorable) engagement. However, considering the dark tone this show tends to take, we knew there was bound to be a deadly aftermath to follow. In a fit of rage, Damien Darhk sent his Ghosts to kill Oliver and Felicity became fatally wounded in the crossfire, leaving viewers with one very grim question on their hands: Will Felicity survive? As much as I want to think positive about this (after all, this group has faced much worse than a gunshot wound), I'm tempted to believe our beloved Miss Smoak won't make it out of this season alive. And here's why...

1. It Would Completely Change Oliver

Oliver has suffered a lot of loss throughout his life, but killing off the woman he loves could be just the thing to send him down a dark and interesting path. Perhaps this will be what it takes for the Green Arrow to throw that "no killing" policy out the window and take Darhk down once and for all.

2. It Would Leave Team Arrow Vulnerable

Felicity may have never donned a vigilante costume, but that doesn't mean she wasn't a hero in her own right. This squad would fall apart without her and could seriously raise the stakes for whatever evil foe they have to go up against next. It's not pretty, but it would make for a pretty great story.

3. The Cast Doth Protest Too Much

David Ramsey (who plays Diggle) recently shared his thoughts on the matter with Entertainment Weekly and felt like Felicity couldn't be the one they kill off. “I just can’t see them messing with that relationship," he explained. "I don’t even know if [Oliver] would be able to talk if it was Felicity. He would just be so broken." And while those are all very valid points, I can't help but wonder if he's purposefully trying to make us doubt this outcome — possibly so we can all be shocked about it later on?

Like I said before, this is a dark show whose protagonist seems to be doomed to a life of loneliness and brooding. I'm definitely not happy about it by any means, but that's generally the life a vigilante is forced to lead. And if Felicity is around, he's just too happy to be able to stick to that formula.

After discovering that he had a son, Oliver made the monumentally terrible decision to not tell Felicity the truth. Just think what that'll do to him if she ends up dying. To keep such a big secret from the woman he loves and never have a chance to come clean about it? That's bound to rack him with some serious guilt... which could lead to some reckless behavior... which could lead to some interesting plot developments.

6. The Writers Love To Torture Us

Arrow is not above kicking us right in the feels, and nothing would do that more than taking away the one bright and bubbly light on this series. It would be the biggest lost Star City has ever seen and might be just the thing the writers want in order to propel us into the remainder of Season 4.