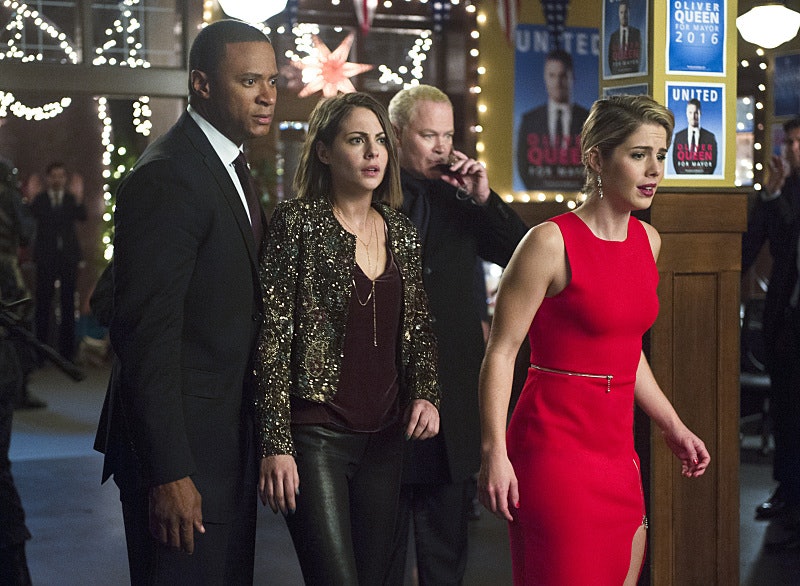 Is anyone else freaking out right now? Seriously, I've yelled at the TV so much that my neighbors probably think I've gone crazy. (Spoiler: They're not wrong.) Why am I freaking out, you may ask? Well, if you caught the Arrow mid-season finale, you know perfectly well what's gotten me positively hysterical. Felicity has been shot, and all our fears about her future on the show (or lack thereof) are at a high. Ever since that flash forward in the premiere, we've wondered whose grave it was that Oliver was visiting. And now more than ever, it's looking like the character in question may be Felicity. (No, I'm not crying, YOU'RE crying!)

Of course, this prospect alone is bad enough. But the Arrow writers just couldn't help themselves. They had to tug (nay, tear out) our heartstrings by making this happen right after Oliver proposed to Felicity with the most adorable speech ever: "Someone that has stood beside me when times are darkest. She is the one who lights my way. Felicity Smoak, would you make me the happiest man on the face of the Earth?" And she said yes! For a few glorious minutes, Olicity was happily engaged! But we should've known right then and there that it wouldn't last.

While on their way home, a group of assassins (who I'm assuming were Damien's ghosts) fired automatic weapons at their vehicle. And while Oliver managed to climb into the front seat and drive off without being injured, the same could not be said for our beloved Miss Smoak. Once they were far enough away from the gunfire, Oliver pulled over and found Felicity bleeding out from a bullet wound, at which point I curled up in the fetal position and started banging my head on the wall. (I wish I was kidding.)

Of course, that's not to say that Felicity won't survive her injuries. This group has certainly faced worse than bullets. However, the promo at the end of the episode had Oliver's words from the flash forward echoing as Felicity was rolled into surgery on a gurney. "It's not my fault. It's my responsibility," Oliver tearily states in front of the tombstone in question. "I'm going to kill him." ("Him" meaning Damien, presumably.)

Again, this doesn't exactly confirm anything one way or the other, but Arrow certainly wants us to think that Felicity's life is in serious jeopardy. I guess we'll just have to wait for the show to return to see how it all plays out.

More like this
Every Horror Movie Reference In The 'PLL: Original Sin' Premiere
By Alyssa Lapid
'The Sandman’s Ending Is A Departure From Neil Gaiman’s Comic Book Series
By Kadin Burnett
Netflix Just Rebooted A Classic ‘90s High School Drama
By Maxine Harrison
Stephen Graham’s Wife Plays A Vital Role In His Career
By Emma Madden and Sophie McEvoy
Get Even More From Bustle — Sign Up For The Newsletter