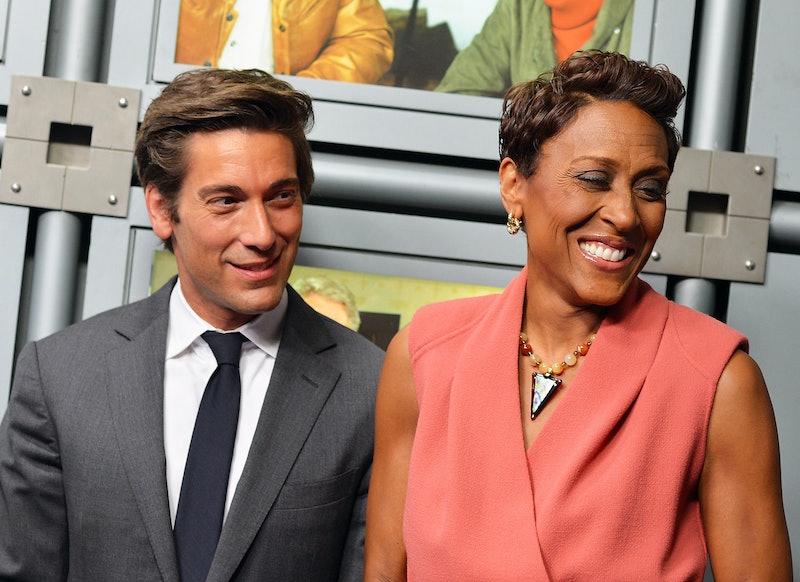 When the Democratic candidates take the stage for their third debate Saturday, they will be moderated by a pair of esteemed journalists — one of whom is apparently among the sexiest men alive. The ABC News-hosted Democratic debate will be moderated by the network's ABC World News Tonight host David Muir, who was one of People's sexiest men alive in 2014, along with chief global affairs correspondent Martha Raddatz. One look at the anchor and it's not hard to see how he made the magazine's list, but the reasons David Muir deserves People's "sexy" honor go far beyond his devastating good looks.

Muir first came onto the scene as the weekend anchor for ABC World News Tonight, as well as acting as the principal substitute for Diane Sawyer, the broadcast's main anchor. In September 2014, after Sawyer stepped down from the position, Muir succeeded her as anchor. During his tenure, Muir has covered major headlines, from the Ebola outbreak to the Boston Marathon bomber's trial to, most recently, Donald Trump's call to ban all Muslims from entering the United States.

Over his years at ABC, Muir has won an Emmy award for outstanding live coverage and the prestigious Edward R. Murrow award for his reporting from Mogadishu on the famine in Somalia. In 2014, Muir racked up yet another honor when he was named one of People magazine's sexiest men alive. Here are nine reasons he totally deserves that title:

He Has Been Dedicated To Journalism From A Very Young Age

By the fifth grade, Muir was obsessed with the news. He told People:

When I was a 12-year-old boy, I'd play with my friends after school, but I'd always excuse myself to go in and watch the news at 6 p.m. I didn't care. I thought Peter Jennings was the James Bond of evening news.

He started trying out his calling in life by "broadcasting" from a cardboard box in his family's living room. Then, when he was 13, he started his career for real as an intern for local Syracuse, New York, station WTVH-TV. "They kept a growth chart for me in the newsroom," he told People.

He's Not Afraid To Face Danger For A Story

When he was reporting on the famine in Somalia, "Our team came under fire by a terrorist group trying to block the aid from coming in." Being the gracious teammate that he is, he added, "I never forget the personal risks our team takes."

He Has Amazing Taste In Music

Muir told Vanity Fair that he often listens to Radiohead and Coldplay in the office, but when he's running on the treadmill, his go-to playlist is Spotify's Teen Party. And he's not embarrassed. "It sounds ridiculous," he says, but he's confident that it's what "everyone will be listening to in a few months."

Besides English, Muir is also fluent in Arabic.

He Likes Using Journalism To Give People A Voice

When recalling his breakout, Muir told People, "Hurricane Katrina was a defining moment in my career. I realized I could give people a voice."

He Has Impeccable Style

Muir looks just as good in a sharp Zegna suit and tie as he does in jeans and a T-shirt while hiking. There's probably nothing this man can't wear well.

He may be one of the most recognized faces in nightly news, but New Yorker Muir still takes the subway to work every day.

He Cried While Watching The Notebook

He admitted to Vanity Fair that when he watched the Ryan Gosling romance for the first time on a flight recently, he cried in front of the flight attendant.