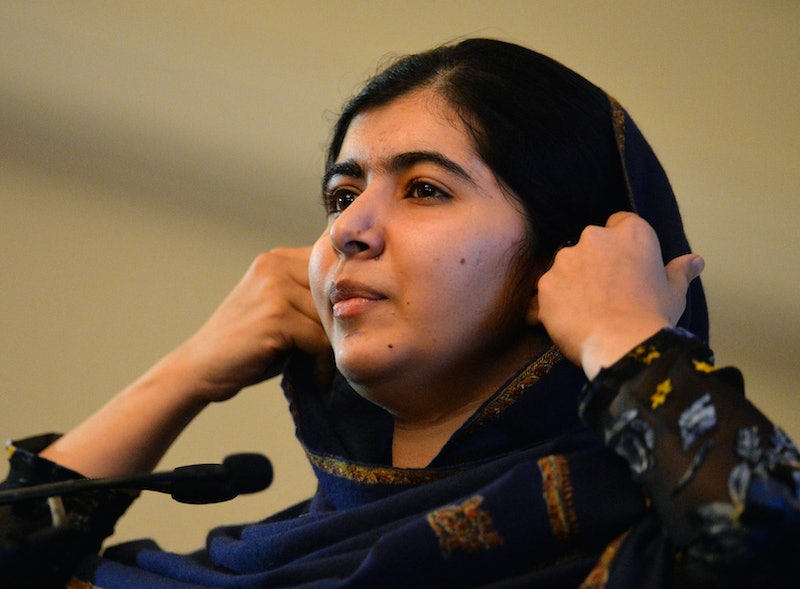 Despite only being a presidential candidate and not serving in any office, GOP frontrunner Donald Trump's proposal to prevent Muslims from entering the United States has gained worldwide attention. It's even inspired a petition in the UK to ban the candidate from the country, with British Prime Minister David Cameron issuing a statement against the idea as well. Now, Nobel Prize winner Malala Yousafzai has condemned Donald Trump's proposal as well.

The 18-year-old Pakistani Muslim and prominent education advocate recently spoke at an event in the central England city of Birmingham, where she now lives. Malala was joined by two survivors of the Peshawar school massacre who were honoring the lives of 134 students tragically killed in the attack two years ago. During her talk, she continued pushing for equal opportunities in education, stating that knowledge is the only way to truly combat ISIS and other terrorist organizations. "If we want to end terrorism, we need to bring quality education so we defeat the mindset of terrorism mentality and of hatred." She was later asked about Trump, and expressed her disapproval of his Islamophobic politics.

Malala's response to Trump is a powerful condemnation of hateful rhetoric. A survivor of a terrorist attack herself, she insinuated that the Donald's proposal is not only discriminatory, but would stoke anger among terrorist organizations in a way that could net them more members:

That's really tragic that you hear these comments which are full of hatred, full of this ideology of being discriminative towards others ... I have to say that, whether it's Western media or Eastern media, if they only blame 1.6 billion Muslims for terrorists attacks, then terrorism can't be defeated. That just leads to creating more anger in people, and leads to producing more terrorists.

Her father echoed her sentiments, calling Trump's statement "unfair" and "unjust." It should go without saying that Trump's proposal is a terrible idea — one so wholly against core American ideals that White House Press Secretary Josh Earnest has insinuated that it may disqualify the GOP frontrunner from the presidency altogether. The fact that Malala is addressing such a potential policy shows just how far-reaching Trump's comments are. It may hopefully serve as a wake-up call for the candidate, whose risky outspokenness simply cannot be ignored.