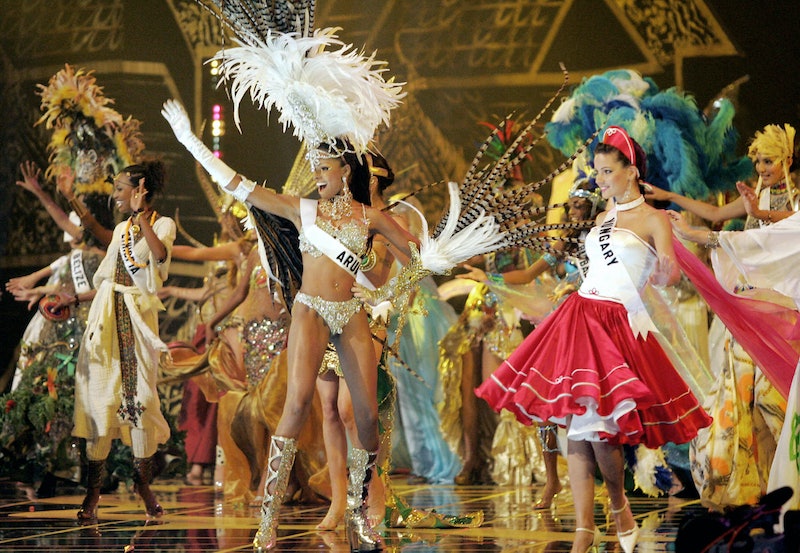 Anyone that has watched Toddlers & Tiaras knows that there are a hell of a lot of beauty pageants out there in the world, and they come in all different levels of difficulty and prestige. But what about two pageants that have basically the same name, such as the Miss Universe competition and Miss World? Though both pageants evaluate the beauty of contestants from around the globe, believe it or not, there are actually some major differences between Miss Universe and Miss World.

Now you probably expected that these pageants differed on some level. That would just be bad business otherwise. Unfortunately, it's not that Miss World just reigns over Earth and Miss Universe allows all life forms from throughout space and time to compete, although that would be pretty sick if that were the case, right?

No, the differences between Miss Universe and Miss World are subtler than that but important to know whether you've immersed yourself in the world of beauty pageants or are more of just a casual viewer, especially with both competitions taking place this month. Who can compete in Miss Universe? What events do contestants have to go through in the Miss World competition? What does the winner of each pageant get after everything is said and done? Get your tiaras and sashes ready, because the answers to your burning beauty pageant questions will be revealed below.

When Does It Takes Place?

Almost as if to make these two pageants as confusing as possible, the finals of both are taking place this weekend. Miss World is up first on Saturday, Dec. 19, and that'll be followed by the Miss Universe pageant on Sunday, Dec. 20. However, these two competitions don't usually coincide like this. But it's almost as if there's no rhyme or reason to when each pageant takes place. For the most part, the grand finale of each competition has occurred in a different month, from August to September, each year during the past five years. Well, at least they're consistent in being inconsistent.

Where Does It Take Place?

So as promised, who are the people behind each pageant? Well, the Miss Universe Organization, which also runs the Miss USA and Miss Teen USA pageants, was famously owned by Donald Trump. However, the real estate tycoon and Republican presidential hopeful sold the Miss Universe Organization to the U.S.-based WME/IMG in September after NBCUniversal cut ties with him. A Brit named Eric Morley created the Miss World Organisation, and his wife Julia Morley took over the company as CEO after he passed away in 2000. So all in all, because of their ownership, you could say that Miss Universe has more of a corporate vibe while Miss World is keeping it all in the family.

How Old Is It?

If we went by the phrase "age before beauty" to determine which pageant reigns supreme, Miss World would win by a scooch. This year marks the 65th anniversary of the competition, while the 64th annual Miss Universe will be held in 2015. But I don't think these pageants look a day over 30.

How Many Women Compete?

Surprisingly, Miss World has a lot more contestants than the Miss Universe pageant this year. A total of 115 women will compete in Miss World, while 80 women will be vying for the Miss Universe crown. Those numbers don't really go along so well with the scale that the names of the pageants represent, but as I mentioned earlier, the whole universe isn't exactly represented in this competition either, so beggars can't be choosers.

You may think that all beauty pageants are the same since so many of them feature women gliding across the stage in evening gowns and fumbling interview questions. And if you thought this, you'd be wrong. Both Miss Universe and Miss World have rounds where the contestants are evaluated based on their appearance in their fancy dresses or their answers to interview questions. However, one major difference between the two pageants is that the Miss World competition no longer features a swimsuit round in an effort to have the contestants come off more like ambassadors rather than beauty queens. Miss World also features challenges where contestants are evaluated on their charity work, use of multimedia, athleticism, and talent. Miss Universe is also switching things up a bit this year, allowing viewers to score contestants on a scale of one to 10 on their eveningwear, swimsuit, and interviews online for the first time ever. And let's not forget about Miss Universe's always-amazing national costume round. Never forget.

What Does The Winner Get?

It's a little hard to figure out exactly what the woman who takes home the title in each pageant gets after winning the whole shebang. Last year, Miss Universe Colombia Paulina Vega took home a year-long salary, an apartment in New York rent-free, a one-year scholarship to the New York Film Academy, a modeling portfolio, professional and PR representation, invitations to events, clothing, beauty products, and a bunch of other prizes for winning the title of Miss Universe 2014. As for Miss World, it's unclear what the champion of this competition wins. It looks like there may be some sort of prize money given to the winner, as the mother of Miss World 2013 Megan Young explained to the International Business Times in October 2013.

But as cliche as it sounds, if you win one of these titles, it surely won't be something you'll soon forget. It may not be as great as winning some extra moolah, but hey, it's better than nothing.