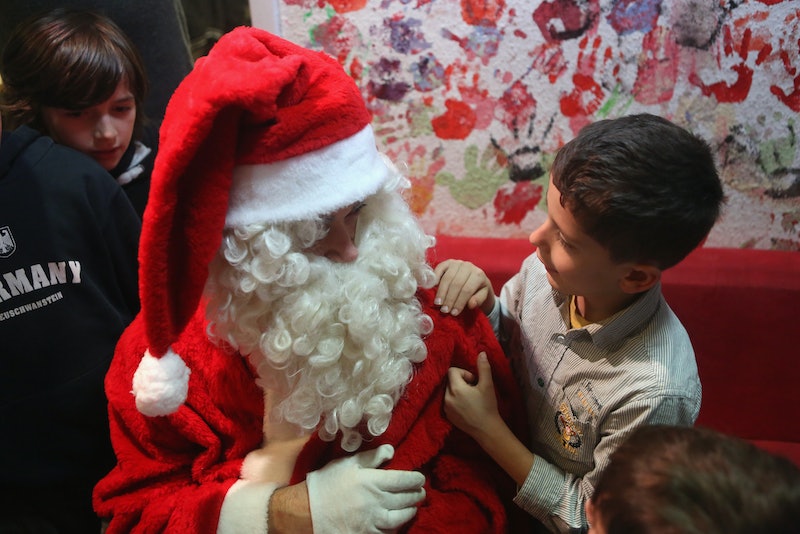 It's the most wonderful time of the year! Sleigh bells are jingling, Mariah Carey's holiday hits dominate the radio...and thousands of refugees worldwide are seeking shelter, in what many are calling the year's biggest humanitarian crisis. Kind of casts a pall over the holiday season, doesn't it? Luckily, you can help, even if you're not a big-shot politician or a billionaire. (And if you're either: nice to meet you, and also do more, please.) Even if you only have a small amount of cash, a little time to spare, or some random gently used household items, you can help make a refugee's life easier.

The sheer number of people involved in the international refugee crisis is staggering. The UNHCR believes that there are over 4 million Syrian "persons of concern" fleeing the conflict in their country, and that's just people who have registered; the actual number of Syrian refugees seeking sanctuary may be much higher. There are over 5000 refugees currently in the Calais "jungle" camp, trying to reach England after arriving from places as diverse as Etritrea, Afghanistan and Libya. And it's estimated that during each day in 2015, 42,000 people around the world had to leave their homes. You may be feeling frustrated that America's refugee intake from Syria in particular is still very small, but know that there are many ways that you can help.

When you're looking to get charitable, always thoroughly research an organization's needs and goals before you get involved — this can help you avoid making mistakes, like donating items that they don't actually need. And remember — even if you can only spare a few bucks or a few hours, it matters. A little informed goodwill can go a long way.

If you're time-poor but have a little bit of cash left over from your holiday shopping, consider putting it to use as a donation for one of the organizations working on the ground with refugees in Syria, as well as other parts of the world where the crisis is most intense. Need a few ideas? Médecins Sans Frontières, or Doctors Without Borders, which gives much-needed medical help to refugees across Europe, is one of the most vital volunteer organizations out there. You could also give to the Migrant Offshore Aid Station, which gives aid to migrants as they struggle in boats across the Aegean, Mediterranean and Andaman Seas, or Hand In Hand For Syria, which distributes humanitarian aid in areas of Syria that bigger aid agencies can't access.

Got an old tambourine or dusty (but perfectly functional) guitar lying around? Consider donating it to Music Against Borders, which actively collects musical instruments to donate to residents of the Calais migrant camp in France. The charity has some guidelines: they're particularly looking for "instruments of Syrian, Sudanese, Afghan, Ethiopiaian and Eritrean origin," as well as anything that can be used by children. So if your own babies have outgrown their xylophone, send it over to MAB.

3. Help A Local Refugee Family Resettle With The IRC

The International Rescue Committee actively helps refugees as they resettle in the U.S.. One of the largest charities of its kind in the country, they have 22 offices around America, and their volunteers do everything from helping families with job applications, to giving basic mentoring to children, to helping to plant a garden at the center of a new refugee community. If you've got any time over the holidays, find your nearest office and go through their volunteer verification process to help.

4. If You're Canadian, Sponsor A Resettling Family

The Syrian families that were recently welcomed to settle in Canada by Prime Minister Justin Trudeau were all privately sponsored; and if you're Canadian, you can form your own private sponsorship group with Lifeline Syria. Being a sponsor is a demanding role, as you'll literally be the first introduction and primary connection between newly arrived families and Canadian society, and you'll be helping them with tasks like finding doctors, registering at schools and securing housing. But if you and friends want to be part of it, get in touch with Lifeline Syria to see how to help.

5. Give Your Old Clunker Or Bike To Shelterbox

Shelterbox is an aid organization that offers kits called Shelterboxes — which contains basics from a tent to eating utensils and children's toys — to people in need around the world, including those suffering in the refugee crisis. You can help fund the creation of a Shelterbox by donating $1000; but if you don't have an extra pile of money available, you can also help create Shelterboxes by donating your out-of-date wheels. Shelterbox has paired up with Cars 4 Causes to encourage people to donate their cars, bikes, RVs, and even their jet skis to the organization. Cars 4 Causes then sells the vehicle, and gives the money to Shelterbox.

6. Give Donations To Save The Children As Holiday Gifts

What do you get for the person who already has everything? Why not a feeling of satisfaction at helping people in need? That's why charity gifts were invented. One of the best organizations to help support refugees (particularly children) is Save The Children, which allows you to buy items for refugees ranging from winter clothing to tents. And until December 31, the UK Government is matching every gift's value — so you're effectively giving double on behalf of your friend. That's a way better present than whatever potpourri thingie you were planning on giving your roommate, right?

If you want to participate directly in the giving, you can buy some holiday gifts for refugees yourself. A camping company based in the United Kingdom called Leisure Fayre allows you to purchase winter essentials like tents and sleeping bags, and donate them directly to people living out in the cold in refugee camps. These items are all 20 percent off and will be delivered to camps in Calais.

If you live in one of the states where the government is reluctant to get involved in the Syrian refugee effort, don't take it lying down. The Refugee Council USA has a comprehensive guide about how to contact your representatives, senators and governors to talk about refugee rights. There's also a motion currently in the House of Representatives, the Protecting Religious Minorities Persecuted by ISIS Act of 2015, that could benefit from your support, whether by lobbying or starting petitions. Look into it, and if you feel motivated, get out there. You may feel helpless when you think about the refugee crisis, but your actions really do matter.

More like this
5 Ways To Stand In Solidarity With Women In America From The UK
By Sophie McEvoy
How To Fight For Reproductive Rights, Based On How Much Time You Have
By Courtney Young
Windrush Victims Are Still Waiting For Compensation
By Sam Ramsden
How To Use Less Plastic To Help The Planet
By Carolyn Steber
Get Even More From Bustle — Sign Up For The Newsletter