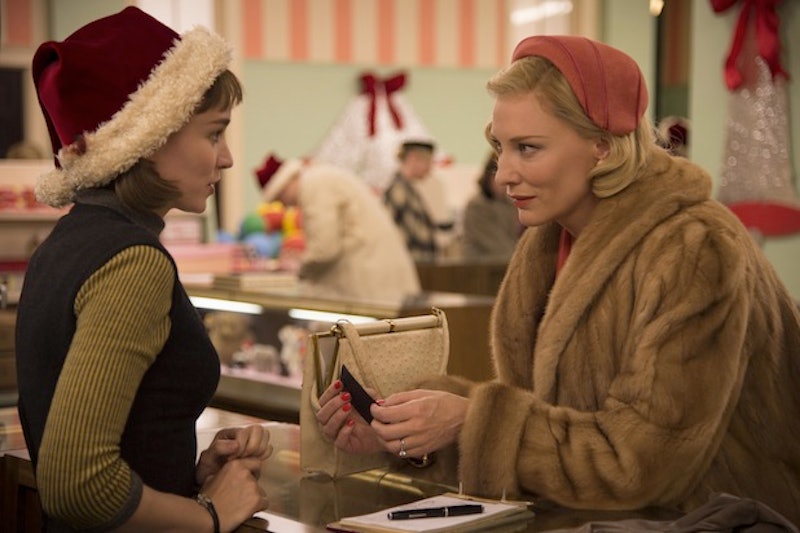 Director Todd Haynes' romantic drama, Carol, has risen as one of the handful of standout films to emerge this awards season. Most recently, the film has garnered the most 2016 Golden Globe nominations, picking up five well-earned nods. Carol has received critical praise on everything — from the compelling performances given by leading ladies Cate Blanchett and Rooney Mara to its gorgeous cinematography (you can thank cinematographer Edward Lachman for those breathtaking, grainy shots in 16 mm). Needless to say, if you want to be up to speed concerning this awards season, you're going to have to know what the Oscar predictions are for Carol and what the movie is truly about. Luckily, this is the guide you need to teach you everything you need to know about the critical darling.

Carol has done well in racking up awards from the industry and critics. It will no doubt gain even more nods as well once the Academy Awards makes its nominations announcements for 2016, most likely for Best Picture, Best Actress (Blanchett), Best Supporting Actress (Mara), Best Director, Best Screenplay (Phyllis Nagy), and possibly others. Carol is a love story that takes place in the New York of the early 1950s between two women. The last time a movie about a lesbian romance was this buzzy was back in 2013 with the French film Blue Is The Warmest Color. Carol, however is an entirely different tale. Here's what to know.

So, Who Is Carol?

Carol Aird, as portrayed by Cate Blanchett, is a woman in the middle of nasty divorce with her husband and custody battle for her young daughter. She is a glamorous type who catches the attention and romantic affections of Therese Belivet (Rooney Mara), a younger woman and aspiring photographer. The conflict in this film stems from these women learning self-acceptance for themselves and their love in the backdrop of intolerance that threatens to ruin all.

Is Carol Based On A True Story?

Phyllis Nagy, who wrote the film's screenplay, adapted it from the 1952 novel titled The Price of Salt (later published as Carol) by Patricia Highsmith, who wrote it under the pseudonym Claire Morgan. The novel was semi-autobiographical in that, according toan interview with Haynes in Wired, Highsmith took pieces of experiences from her own personal life to stitch together the overall story. Nagy started working on the adaptation nearly 20 years ago, Wired reports,.

It's A Female-Led Romance, But Directed By A Man

I know, I know — it sounds bad. But as New York noted, Carol is particularly refreshing because despite the fact that it is directed by a man, it's a film that manages to escape the male gaze by the story itself being told from the perspective of the female leads. The film is not gratuitous (especially when it comes to sex), but is sensitive and elegant. Furthermore, Nagy, along with Carol's female producers Christine Vachon and Elizabeth Karlsen, told Bustle in an interview in November that they felt Haynes was a perfect pick to helm this feminist film. "We’re very aware of wanting the industry to be diverse in terms of gender and race, and that’s a big focus for us and big objective to achieve," Karlsen said. "But Todd just felt like he was the director who would realize the film in the most beautiful way, both aesthetically and emotionally."

If You Need Further Convincing It's Still Feminist...

"What I loved about the movie was that nobody seemed to be undone about their gayness," star Sarah Paulson told Variety at the New York premiere of Carol in November. "It was really more about how to figure out how they were going to live with the truth about themselves. It was more to do with what it means to truly and intimately love someone and what the cost of it can be in a particular time where there are societal pressures. It’s a beautiful but sad story."

Alright, So Does It Have A Happy Ending?

If you're looking for movies to knock out before the 2016 Oscars, which take place on Feb. 28, without a doubt Carol should be on your list. Not only is it a fantastic film that is both subtle, yet memorable in its anatomy of a romance, but it's also filled with elements that are sorely lacking in many Hollywood films — it is a feminist film, led by female actors, and the storyline isn't heteronormative. More simply put, Carol rocks.

More like this
Amanda Gorman Shared A Powerful Message On Meghan Markle’s Penultimate Podcast
By Darshita Goyal
Claire Foy & Rooney Mara Revisit A Devastating Tale In 'Women Talking'
By Bustle UK
Yes, That's Lindsay Lohan's Sister Singing In The 'Falling For Christmas' Movie
By Radhika Menon
Keke Palmer Paid Tribute To "Other Half" Darius Daulton After Announcing Pregnancy
By Jake Viswanath
Get Even More From Bustle — Sign Up For The Newsletter