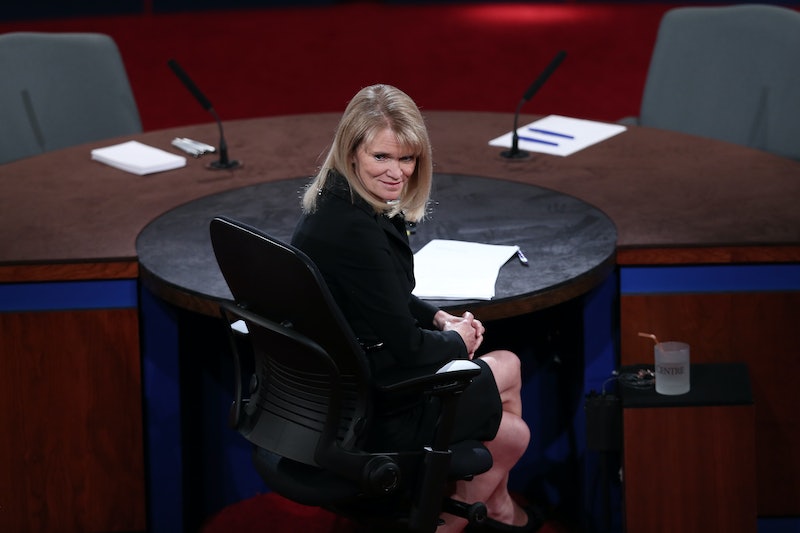 The third Democratic debate will feature a new panel of moderators from ABC News and the network's choices are promising, so cancel all of your Saturday night plans. The debate is where it's at. Equipped with her fair share of notable interviews, ABC News chief global affairs correspondent and debate moderator Martha Raddatz has proven she's a journalist who means business. Raddatz has nearly two decades of experience in reporting on foreign policy and has travelled to Iraq over 20 times. When she first joined ABC News in 1999, she focused on conflict in the Middle East and has since gained a reputation as the only television reporter to cover a combat mission while inside an F15 fighter jet. In other words, she was fully present during actual combat.

Before working for ABC News, Raddatz was a White House correspondent for an affiliate station in Boston. Karen Travers, who worked with Raddatz during that time, commented on the journalist's credibility.

Martha has a human approach. She wants to get something out of people, and people want to get their point across to her. People don't see her as someone who is just grilling them. There's a level of trust.

Raddatz was also the first reporter to broadcast the death of Al-Qaeda leader Abu Musab al-Zarqawi. She also hosted the 2012 vice presidential debate between Paul Ryan and Joe Biden — this upcoming debate isn't her first rodeo, people. In addition to an astoundingly daring career as a conflict reporter, Raddatz has shown that she can throw down when it comes to music. During a White House press briefing with Tony Snow during the second Bush administration, the journalist's phone rang (oh, the horror) and her ringtone of choice was none other than Chamillionaire's "Ridin'." But you'll never expect to catch her "ridin' dirty" after reading about these five completely badass interviews.

It's kind of become a given that Ben Carson isn't necessarily well-informed, especially when it comes to foreign policy. In this August 2015 interview, Carson speaks about how he believes that Planned Parenthood targets black communities with the intention of suppressing their population growth. He resorts to calling it a form of "eugenics." Raddatz's handling of the situation is impressive not because Ben Carson didn't know what he was talking about, but because she had her facts ready and was quick to prove him wrong.

Raddatz interviewed former President George W. Bush in 2008 towards the end of his term in office (you can watch the video here). After being asked about his legacy, Bush attempted to justify his reasoning behind sending troops to Iraq.

There have been no attacks since I have been president, since 9/11. One of the major theaters against al Qaeda turns out to have been Iraq. This is where al Qaeda said they were going to take their stand.

Raddatz interjected. She clearly isn't afraid to call out anyone, including the president.

But not until after the U.S. invaded.

Touché. Bush's next comment kind of shocked the nation.

Yeah, that's right. So what? The point is that al Qaeda said they're going to take a stand. Well, first of all in the post-9/11 environment Saddam Hussein posed a threat. And then upon removal, al Qaeda decides to take a stand.

In one line, Raddatz killed it.

Refusing to change the subject, Raddatz confronted Trump on his comment about John McCain not being a war hero. Throughout the entire interview, she persevered for over eight minutes on the same topic. She read McCain's biography aloud to Trump and later accused him of name-calling. Admirably, she held back from being too accusatory and stuck to objective questions.

This set of interviews are perhaps the most indicative of Raddatz's commitment to reporting on one of the most important and lasting issues in the Middle East. Reporters put themselves in more danger than many people realize, especially when they determinedly speak their minds, cover controversial topics, and travel to dangerous regions. In this particular This Week segment, Raddatz revisits two West Bank Palestinian families she interviewed 26 years ago. By returning to the families, she's helping America understand the Arab-Israeli conflict from an unfortunately less common point of view.

5) Cheney And Public Support For The War

In a shocking 2008 interview with former Vice President Dick Cheney, Raddatz mentioned the American public's declining support for the war. Cheney callously retorted, "So?" Raddatz asked whether he cared what the people thought and simply moved on from there displaying composure and precision when it comes to asking just the right questions. After Cheney had proven his callousness after dismissing the soldiers as "volunteers," Raddatz simply said, "Okay, I can see we're done."