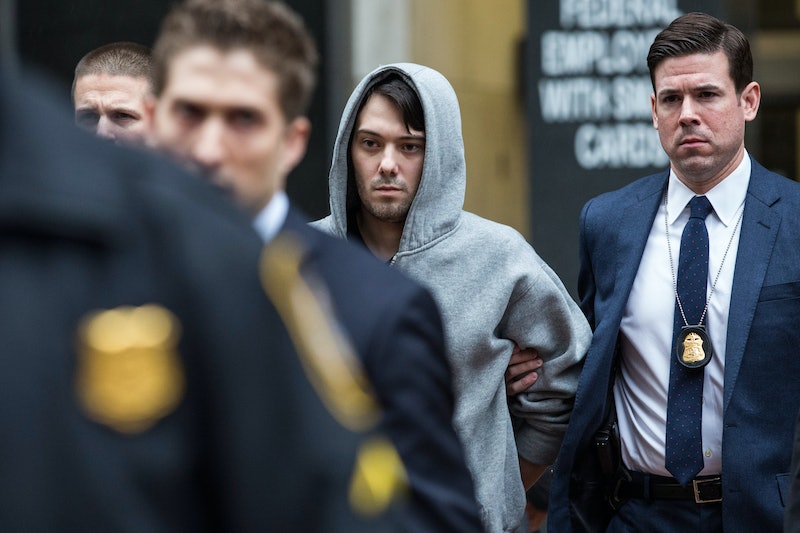 After dodging unrelated allegations over price gouging, which he denies, pharmaceutical entrepreneur Martin Shkreli was arrested on charges on securities fraud on Thursday. (He was released on bond later Thursday.) In September, Shkreli made headlines for hiking up the price of a life-saving drug from $13.50 to $750 a pill, delivering the message that money trumps lives. Shkreli gained notoriety from that episode, but his arrest on Thursday is actually unrelated. Shkreli's securities fraud charges stem from his time as hedge fund manager and as CEO of biopharmaceutical company Retrophin, who is accusing the exec of using the company to fund and defraud investors in his hedge fund, which Shkreli denies.

Earlier this year, Shkreli used his current company, Turing Pharmaceuticals, to purchase a drug called Daraprim, which treats a rare parasitic infection called toxoplasmosis and can save the lives of those who are inflicted. Shkreli and Turing decided to jack up the price of the pill about 5,500 percent.

As if that didn't already make him the most loathed man in America, Shkreli also paid millions of dollars to buy Wu-Tang Clan's album Once Upon a Time in Shaolin, which the group only produced one copy of as sort of a performance art stunt, and then told Bloomberg Businessweek that he hadn't even listened to it yet. When Hillary Clinton urged him to lower the cost of Daraprim, he tweeted his response: "lol." Even Donald Trump called him a "spoiled brat" — that's when you know you're in a league of your own.

Questionable personality aside, Shkreli is now in some serious legal hot water. Now that he's been charged with securities fraud, here is everything you need to know about Shkreli's case.

The indictment alleges that Shkreli lied to investors of his two hedge funds, MSMB Capital and MSMB Healthcare, allegedly misleading them to think that the firms were performing much better than they were. Shkreli denies all charges.

According to a concurrent suit filed by the Securities and Exchange Commission, Shkreli allegedly told investors that MSMB Capital Management's assets totaled $35 million, when in reality they totaled less than $1,000. Shkreli denies these claims, as well. In 2011, MSMB Capital Management lost more than $7 million and was essentially bankrupt.

According to the indictment, Shkreli allegedly took stock and money from Retrophin, where he served as CEO, "in an effort to satisfy Shkreli's personal and unrelated professional debts and obligations." Shkreli says these claims are false.

In a filed complaint, the company writes:

Starting sometime in early 2012, and continuing until he left the company, Shkreli used his control over Retrophin to enrich himself and to pay off claims of MSMB investors (who he had defrauded).

In response to Retrophin's lawsuit, Shkreli said in a statement:

The $65 million Retrophin wants from me would not dent me. I feel great. I'm licking my chops over the suits I'm going to file against them.

He has also accused the company of using the lawsuit to avoid paying him severance.

Also arrested on Thursday was corporate lawyer Evan Greebel, who has been accused of conspiring with Shkreli, and denies all charges. Prosecutors say that Greebel, who served as lead outside counsel to Retrophin from 2012 to 2014, had helped Shkreli in multiple schemes. Currently, Greebel is a partner at corporate law firm Kaye Scholer.

More like this
Gemma Collins' Net Worth Is Only Going Up
By Catharina Cheung
What Is Brad Pitt’s Net Worth? The Bullet Train Star Now Makes 8 Figures Per Film
By Hugh McIntyre
What Is Beyoncé's Net Worth? The 'Renaissance' Hitmaker Makes 9 Figures On Tours
By Radhika Menon
10 Easy Beauty Swaps You Can Make Before Plastic-Free July 2022 Ends
By Audrey Noble and Erin Stovall
Get Even More From Bustle — Sign Up For The Newsletter