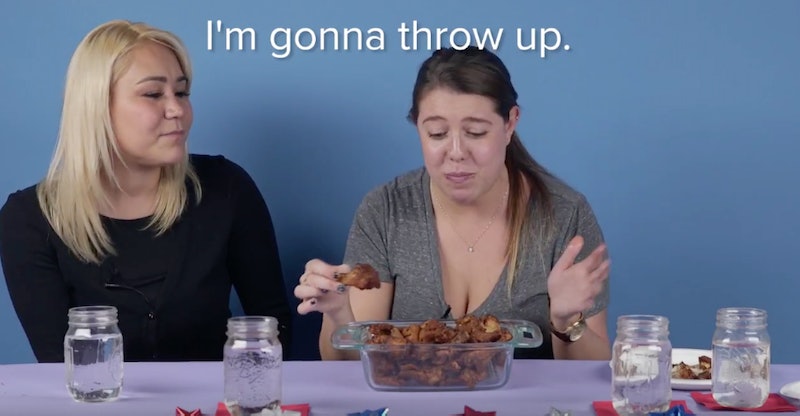 Ever try to eat five hot dogs in five minutes? I hadn't either — that is, until professional competitive eating champ Miki Sudo was at Bustle's studio, coaching me along as I attempted to gag down as many hot dogs as I could in an impossibly small amount of time. What happens when people try competitive eating for the first time? Let me tell you from experience, it's not pretty.

As it happens, Sudo is in fact one of the most kick-ass women I have ever met. You may recognize her from her Coney Island fame — she won the women's division of both the 2014 and 2015 Nathan's Hot Dog Eating Competition (in 2015, she managed to eat an impressive 38 hot dogs in 10 minutes to claim the championship title) — but her many accolades don't stop there. Sudo holds honors in competitions eating, well, pretty much everything, from ribs, chicken wings, and pumpkin pie, to pepperoni rolls, burritos, and Twinkies — even hard-boiled eggs. Basically, if it's one of your favorite foods, Sudo has eaten it en masse, and she just so happens to be my personal hero.

Needless to say, when Sudo offered to stop by Bustle to share a few tricks of the trade, I was thrilled, ecstatic even, to have her at headquarters. Sudo was passing through New York City on her way to — what else? — an eating competition (devouring turkey at rapid speeds, this time around), but before she put her skills to the test, she decided to test out ours, first.

Having always prided myself on my ability to completely clear my plate no matter what the circumstances, I didn't think I would have any problems polishing off a plate of hot dogs. Of course, once the plate of hot dogs was sitting in front of me, each dog glistening in its bun, I began to have immediate second thoughts. What if I choked — both physically and figuratively? Not that I had much time to think about that — the stopwatch was ready to go, and I was about to see if I stood a chance at someday standing next to Sudo at the Nathan's Hot Dog Eating Competition, downing hot dogs faster than you can say "pass the ketchup, please."

But hey, practice makes perfect, and while it might take me a little time to work up the courage to stare down another hot dog, there are other things I think I'd probably be really great at eating faster than the speed of light — y'all should see me with Chipotle burritos.

Watch people try competitive eating for the first time. It's just as messy as you might imagine, but still pretty hilarious. (Unless, of course, you're the one doing the competitive eating. Then, it's just kind of traumatic.)