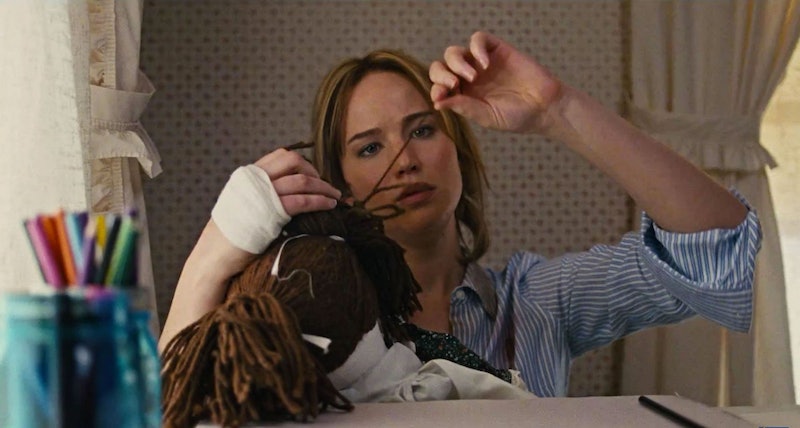 The Oscars race is officially on. With the show not airing until Feb. 28 and nomination announcements not coming until Jan. 15, it's still awhile away from the final stretch. That doesn't mean awards pundits, critics, and fans alike aren't wringing their hands and trying to put in their guesses into the the pool, though. From Best Actor to Best Picture, it's been anyone's game so far, but the race for Best Actress happens to be one of the most interesting. One star that who might earn a nomination is Jennifer Lawrence. She won her first Academy Award for Best Actress for Silver Linings Playbook (2012) and this year she's in the spotlight once again, not only for wrapping up The Hunger Games trilogy in her role as Katniss Everdeen, but for David O. Russell's Joy. So, will Jennifer Lawrence win an Oscar for either film?

Despite Lawrence being a favorite for awards and a popular actress in general, the answer isn't so clear-cut this time around, though she does have a fair shot with Joy. The film is Lawrence's third collaboration with Russell and tells the story of a matriarch and her family over four generations, after starting a business empire. It's unofficially loosely based on the life of real-life entrepreneur Joy Mangano, and has received mixed reviews from critics upon its release.

While the film itself will more than likely not be winning Best Picture this year, Jennifer Lawrence, as the leading protagonist, most certainly crushes it in her role. "What [Russell] created, I think, is just a masterpiece," Mangano told Vogue in a recent interview. According to Vogue, Mangano said she was blown away by Lawrence's "rich" performance. Furthermore, Lawrence is in the running for Best Actress in a Musical or Comedy for the 2016 Golden Globes. However, for her role in Joy, Lawrence wasn't nominated for any SAG awards this year. Usually gaining nominations for both major awards increases the likelihood that an Oscar nomination will follow, but as it appears, Lawrence is not a shoo-in for Joy, the way actresses like Cate Blanchett for Carol or Brie Larson for Room appear to be. The aforementioned ladies are also Lawrence's biggest competition this year, as they've both received critical acclaim for the outstanding performances in their respectful films — films that have been better received than Joy overall. However, that isn't to say Lawrence is completely out of the running for an Academy Award and in fact, it's still quite likely she'll nab a nomination, if not a win.

The Oscars can be unpredictable, but Lawrence is certainly facing a tough battle when it comes to earning that second Oscar. My prediction for the Best Actress award goes to Larson, who is by far one of this year's biggest breakout stars. And if there's one thing the Oscars loves, it's rewarding a new face. In Room, Larson plays a woman whose name is also Joy (ironically), who is held captive in a shed with her five-year-old son for seven years. They are held captive by a man Joy refers to as Old Nick. "Brie understands how adults try to keep children in this protective sphere," said director Lenny Abrahamson in an interview with Entertainment Weekly back in October. "She can go very deep into character but with this amazing lightness of foot. And a lack of that showy intensity which is sometimes mistaken for great acting," he added.

Larson has a serious chance of winning, and a critically praised fresh face combined with a serious drama is like catnip to the Academy. Lawrence, meanwhile, gave an undoubtedly strong performance, but will it be enough to push her into the lead? It's doubtful, but this is the Oscars — you never really know what's going to happen.

More like this
J.Lo Wants To Make A Sequel To This Movie With Ben Affleck
By Jake Viswanath
Jodie Turner-Smith & Joshua Jackson's Relationship Timeline Includes Her Proposing
By Jake Viswanath
Hugh Jackman Shared The Sweetest Tribute To His “Extraordinary” Wife
By El Hunt
'Bridgerton' & 'Succession' Casts Join Forces For A New Dickens Adaptation
By Darshita Goyal
Get Even More From Bustle — Sign Up For The Newsletter