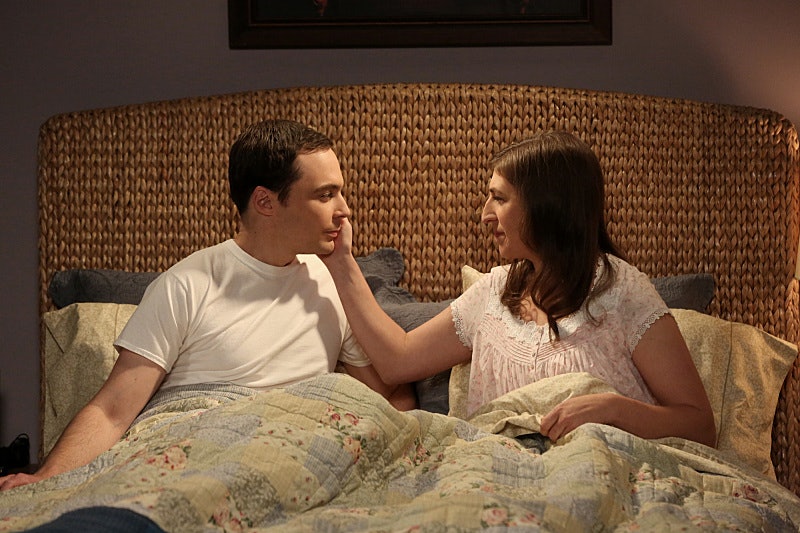 Well, my friends, it finally happened. Sheldon Cooper has boldly gone where he's never gone before — sex town. After nearly six seasons of PG-level foreplay, Sheldon and Amy had sex on The Big Bang Theory and it was everything fans could've hoped for. When you've built up something as monumental as this for so long, it can be difficult for it to live up to your expectations, but the writers handled this Shamy moment in the perfect way and managed to stay true to the characters we've grown to love. But enough with all this chit-chat. Let's dive into all the details that ended up putting the "bang" in The Big Bang Theory midseason finale.

It all started in a galaxy far, far away. (Just kidding. It actually happened right here on Earth, but the opening was played out like in the beginning of a Star Wars movie and I couldn't help myself.) Anyway, in a very appropriate subplot, the guys were gearing up to see the new Star Wars film, which was coming out in just a few days. However, when Sheldon realized that it fell on the same day as Amy's birthday, he decided to be a good boyfriend and spend the evening with her instead. But he still had to figure out the perfect gift to give to her. He had narrowed it down to three possibilities: a Philharmonic performance, a sheep and wool event, or sex, to prove how much she means to him. Guess which one Penny and Bernadette suggested he go with.

Of course, they immediately ended up telling Amy what she would be unwrapping this year (aka "Sheldon's genitals," as he would say). She was thrilled and immediately sprang for a bikini wax. Then the moment arrived and Amy — like the rest of us watching — could barely contain her delight. She was nervous, though, and Sheldon could tell. This is something that she's wanted for so long, but she doesn't know what to expect. Sheldon admitted that he felt the same way, but he wants them to find out together. (All together now: awwwwww!) And the side-by-side comparison of their first time and Howard, Leonard, and Raj's first time watching the new Star Wars movie was priceless.

And while we didn't end up actually seeing them in the throws of passion (this is a CBS sitcom after all), it seemed to provide very satisfactory results. (Amy's hair pretty much summed it up nicely.) And Sheldon said that he looked forward to her next birthday so they could do that again. No complaints here, my friend. And when Arthur showed up in Sheldon's dream wearing full-on Obi-Wan Kenobi garb, he inquired as to how it went. Sheldon, of course, assumed he was referring to the Star Wars movie and said that it was amazing. (Some things never change.)

It's hard to say where things will go from here for the two of them. Will Sheldon propose by the end of the season? Will other intimate moments between the two of them be featured as the episodes progress? Who knows, but I can say with absolute certainty that their relationship has never been stronger emotionally, and of course, physically. Now, if you'll excuse me, I have to watch go rewatch this episode a few more times. Happy Birthday, Amy!