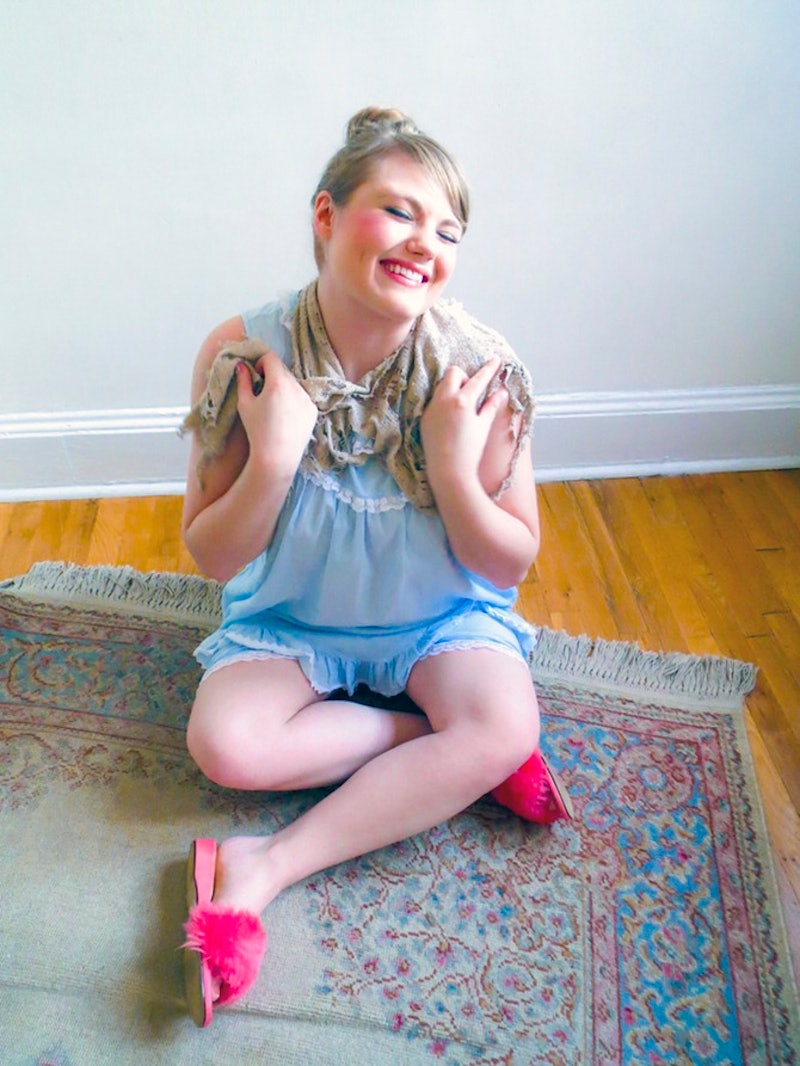 I’ve always had an affinity for old objects, but the one object that I just can’t seem to shake is the blanket I was wrapped in when I was born. Almost every day for the past 23 years of my life, my “Blankie,” as I've always called it, has been there for me. My Blankie is the one thing that I’ve had to comfort me through every breakup, every rejection letter, every bad thunderstorm. Although it's truly unrecognizable today, and although it's no longer washable due to its badly-deteriorated state (it still smells good to me), my Blankie has gotten and given so much love — even if it just looks like a discolored rag that needs to be disposed of, and almost has been on several occasions.

Blankie was originally made for my mom by my crafty great aunt. According to her, it was white, fluffy, and had light pink yarn woven around the edges for trim (which I picked off when I was five). My mom said she would wrap her baby dolls in Blankie when she was very young, long before she would give it to me. I've always enjoyed running the tattered strands of Blankie through my fingers, section by section, before burying my face in it to sniff and even kiss it, nestling it under my neck as I fall asleep. In fact, that’s pretty much been my nightly routine for the past 20 years.

Over time, more and more pieces of Blankie have fallen off, thanks to my habit of repeatedly twisting it between my fingers. I began saving the fallen pieces in my nightstand when I was around 10 years old, and I still do to this day, many different nightstands later. Each time I'm finished handling Blankie, I safely tuck it underneath my pillow.

Growing up, I remember lying on my old bedroom rug and laying Blankie over the length of my body. At first, I could cover everything from the bottom of my chin down to the tips of my toes; but soon, Blankie would only cover from my ankles to my neck. Eventually, Blankie would only cover my legs, then it wouldn't even cover that much. I remember discovering that my blanket couldn’t even cover the full length of my legs anymore.

I felt confusion and sadness all at once; it was the first time I fully realized that I was getting older, and that things were about to change. It was the first time I realized that maybe this object wouldn’t last me my whole lifetime, that perhaps there was something as good that could eventually stand in for my security blanket, something that would last me for many years to come; perhaps, even, something immaterial.

Truthfully, the fact that Blankie hasn't been permanently lost by now makes me seriously wonder if it has some kind of spiritual powers.

To this day, if I'm staying anywhere other than home overnight, Blankie goes with me. When I was really little, I took Blankie pretty much everywhere, and this has always been extremely risky. I’ve left Blankie behind in many public spaces and countless hotel rooms. When I was five, I brought Blankie with me to my grandpa's wake and accidentally left it there. My mom had to call the funeral home, and we picked it up the next day. More than once, I had to track Blankie down in hotel laundry rooms.

One time, I was in the car with my family, leaving for the airport to head home from a summer vacation, when I got this feeling that I'd forgotten Blankie. I raced back up to the hotel room where there were three maids tidying up. One of the ladies was in the middle of removing the sheets, so I frantically felt around in the fabric she was holding onto and recovered Blankie from the depths of the sheets. It was probably my closest call, but this sort of thing has happened too many times for me to even count. Truthfully, the fact that Blankie hasn't been permanently lost by now makes me seriously wonder if it has some kind of spiritual powers.

When I left for college, Blankie came with me. Frequently, I would go to my parents' house on weekends and forget it. (My habit of tucking Blankie away behind my pillow each morning didn't prove so "safe" when I was switching from my bed back home to the bed in my dorm room.) My mom would have to mail Blankie to me, and I'd receive it after many nights of troubled sleep.

I never really told anyone about Blankie, (like, ever) and I think I concealed my secret attachment pretty well. Throughout childhood, I was afraid that other kids would think I was a "baby" who never grew up if they fond out. By the time I got older, my insecurity switched over to being embarrassed about how attached I was to this ratty looking scrap of cloth, to worrying about what a freak people would think I was.

Eventually, I decided I couldn't hide Blankie from my boyfriend any longer.

The first time I ever really told anyone about Blankie was in my junior year of college. I had just met my boyfriend, and I was staying over at his place every single night of the week. In the beginning of our relationship, I went for two whole weeks without touching Blankie. It was the longest I'd ever gone without feeling like I absolutely couldn’t live without Blankie. I had someone new, someone really important to me, and maybe that was enough to forget about Blankie for a little bit. But I still missed it.

Eventually, I decided I couldn't hide Blankie from my boyfriend any longer. I was so nervous, embarrassed, and self-conscious — but I didn't need to be. When I told him about Blankie, he actually cried. My connection to Blankie turned out to be just one more thing he liked about me. He was truly moved by how much of an emotional attachment I still had to this physical piece of my childhood. It took some time for me to get used to breaking out Blankie in front of him, but I eventually got over it, and he didn’t seem to think of me any differently. Just like my family had never thought any differently of me.

In the same spirit of shedding my insecurity, I recently told one of my close friends about Blankie, and all she said was, “I don’t think it’s stupid or silly. It can’t be if it’s really important to you.”

Maybe that’s the real test; if someone judges you for something that's significant enough to you that you don't want to live without it, then maybe that person isn't worth your time. A security object, whether you still use it or not, is part of you, and always will be — and that's really nothing to be ashamed of.

More like this
Harry Styles Addresses The Theory That His New Song "Daylight" Is About Taylor Swift
By Jake Viswanath
The Case For A Hard Launch Summer
By Morgan Sullivan
Are Gemini & Scorpio Compatible In A Relationship?
By Kristine Fellizar
The Most Compatible Life Path Numbers, According To Numerologists
By Kristine Fellizar
Get Even More From Bustle — Sign Up For The Newsletter