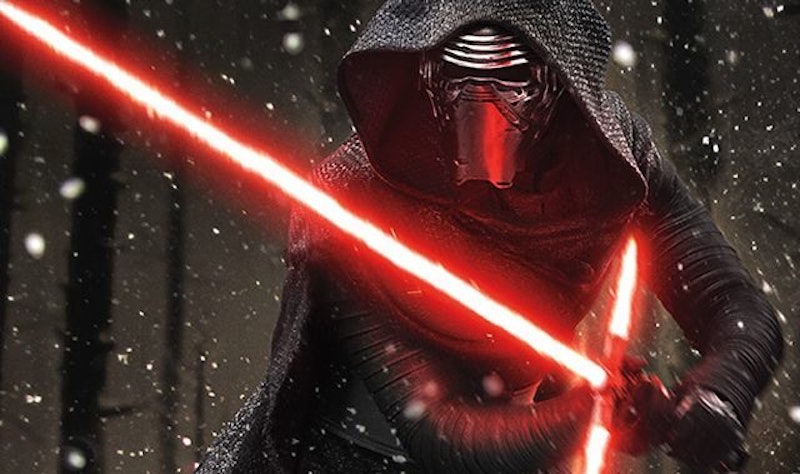 While you wouldn't immediately think that Adam Driver would have a lot in common with his Star Wars: The Force Awakens character, Kylo Ren, it turns out that's not necessarily the case. Sure, the actor isn't going around trying to destroy the people of Earth with a lightsaber (that we know of), but they do share a type of "bad boy" persona that you may not have been aware of. During his appearance with the rest of the Star Wars cast on Conan, Adam Driver revealed that he was once the ring leader of a fight club back when he was growing up in a small town in Indiana. Apparently, a bunch of his friends (and whoever rode by that was interested) would meet at an old building and beat each other senseless until one of them said "uncle" and wanted to stop.

So basically what I'm taking from this is that Driver was pretty much living the real-life version of the Fight Club movie. Wait, is Fight Club actually about Adam Driver's life?!?! (Just kidding, of course. I think...) So given that Ren is the commander of the First Order and a powerful user of the almighty Force, I'd say he'd fully respect and support Driver upon hearing about his youthful indiscretions. Just as Ren was lured to the Dark Side, so was Driver, proving once more that the casting for this movie could not be more spot on.

Sadly, I have yet to see the newest Star Wars installment (that joyous event will take place sometime this weekend), but these Conan interviews have only helped to heighten my excitement and anticipation for what's to come. Whether it's Driver's bad boy background or Carrie Fisher's nonstop (and positively hysterical) inappropriateness, this is one dynamic cast that I can't wait to travel with to a galaxy far, far away.

More like this
Everything To Know About Obi-Wan Kenobi Season 2
By Kadin Burnett
Who Is Liam Neeson's Character In The Obi-Wan Kenobi Finale?
By Kadin Burnett
Here's How To Stream 'Downton Abbey: A New Era' & The New 'Downton' Channel
By Alice Broster and Sam Ramsden
'Criminal Record' Is The 'Doctor Who' Reunion We’ve All Been Waiting For
By El Hunt
Get Even More From Bustle — Sign Up For The Newsletter