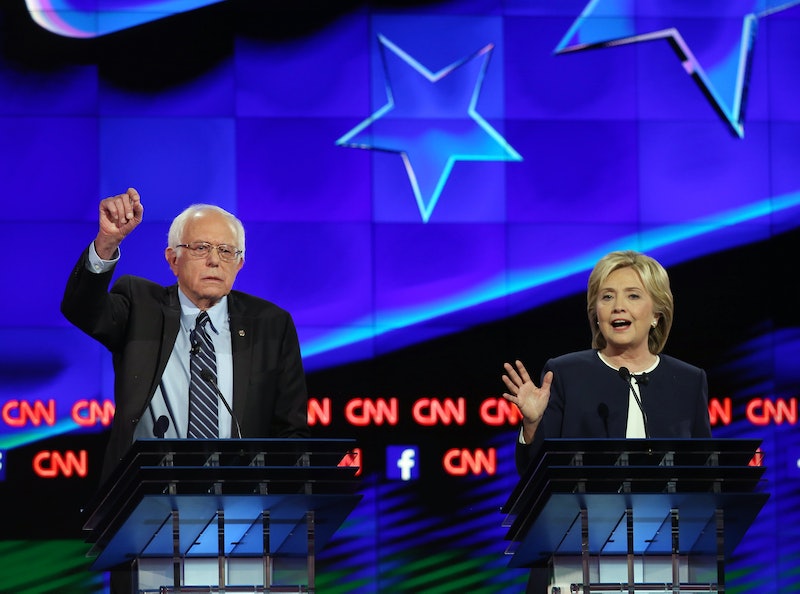 The main topic of Tuesday's Republican debate was — without a doubt — terrorism, and more specifically, how to best defeat ISIS. Each candidate had their own idea on how to bring down the terrorist organization, but one opinion was clear across the board: force was necessary, and President Obama (who many seem to forget is not running for a third term) does not have the strength needed to get the job done. But how would Hillary Clinton or Bernie Sanders tackle ISIS? That's why come Saturday, the two candidates should go head-to-head and debate their strategies, which do contain less militaristic approaches.

Though the conservatives varied in their approaches, it seems their overall more brutish style can be summed up in Texas Sen. Ted Cruz's line: "We will carpet bomb them into oblivion. I don't know if sand can glow in the dark, but we're going to find out!" When asked to clarify his statement during the debate, Cruz said:

What it means is using overwhelming air power to utterly and completely destroy ISIS. ... In the first Persian Gulf War, we launched roughly 1,100 air attacks a day. We carpet bombed them for 36 days ... after which our troops went in and in a day and a half mopped up what was left of the Iraqi army.

Clinton and Sanders will assuredly get a chance to discuss their strategies on ISIS during this weekend's debate, as well. Though instead of simply carpet bombing, the Democratic candidates take a more hands-off approach.

Sanders has called for building a coalition of allies and Middle Eastern countries to defeat ISIS, stressing that the United States need not take charge in bringing the group down. Perhaps the largest staple of his strategy is something he considers one of Clinton's biggest mistakes: the Iraq War. Sanders hopes to not repeat the Iraq War, which he has criticized Clinton for supporting, in America's further engagement with ISIS.

He also opposes a no-fly zone over Syria, a strategy he feels would further entangle the United States in war. In contrast to Clinton's support of the no-fly zone, Sanders again emphasizes his desire to see Syrians take the lead on the fight against ISIS.

As shown with her track record, Clinton's stance on war with ISIS is what some would call more "hawkish" than Sanders'. In contrast to his and even Obama's position, Clinton has called for a no-fly zone in the region, as well as increased air strikes. In her words, she wants an "an intensification and acceleration" of the president's plan.

Despite this move away from the more left-leaning strategies of her peers, Clinton is nevertheless against Cruz's proposal of "carpet bombing." She said in a speech before Tuesday's debate:

Bluster and bigotry are not credentials for becoming commander-in-chief. Promising to carpet bomb til the desert glows ... makes you sound like you are in over your head.

In a nod to the more classically liberal side of Clinton, she also recently advocated for a less militaristic approach. She's asked American technology companies to block ISIS' access to websites, video, and encrypted communication.

Though both Sanders and Clinton have a far less warmongering take on how to deal with ISIS than the Republican candidates, they still have plenty of room for debate against each other. Because their stances are more varied, any talk of terrorism during the Democratic standoff will include both direct and passive action, a sheer contrast to the no-holds-barred rhetoric heard during the Republican debate.