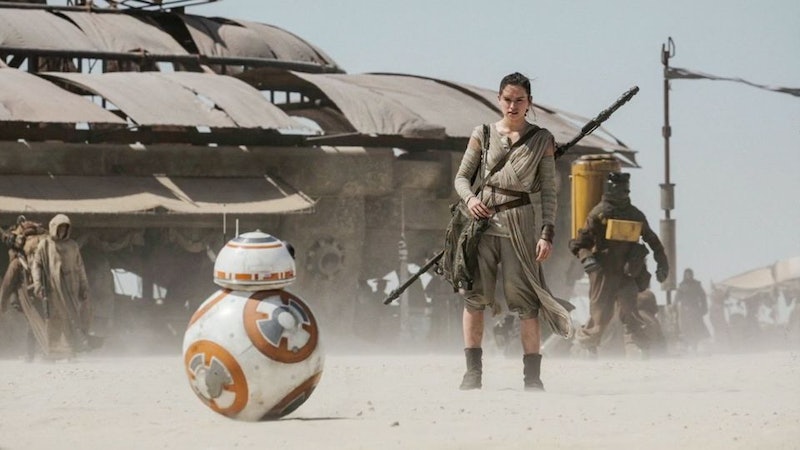 I think we all know by now to safely assume that, for at least the rest of the month, the only thing that people will be talking about besides the holidays is the fact that Star Wars: The Force Awakens was released in theaters on December 18. The new entry into the Star Wars franchise is not only the most feminist film in the franchise, starring, as it does, more than one female character in the main cast, and an actual main character who is female, but it also comes 10 years after the last Star Wars movie was in theaters. Of course, for those of you who can't get out to the theater for early screenings, or have just come home from your screening and want to relive the magic again before the DVD comes out, there's the Star Wars soundtrack. The collection music that goes with the movie was released on December 18, the same as the film, but, hey, some of us are poor. So when will The Force Awakens soundtrack be on Spotify?

Good news, my sci-fi loving friends. The soundtrack debuted on Spotify on December 18, the same time as the general album release, so you can already stream the amazing Star Wars score for free right now. Of course, if you haven't seen the movie yet, I would suggest holding off because the soundtrack is one giant, walking, musical spoiler. Oh, the songs themselves are probably pretty generic, since you won't get a lot of plot information from compositions. It's the song titles that are going to spoil the hell out of you, because they are rather descriptive. ("Scherzo for X Wings" and "Kylo Ren Arrives At The Battle" are two such titles.)

However, there is a downside to the soundtrack. You know those Cantina songs composed by Lin-Manuel Miranda? Remember what a huge deal those were? Yeah, according to Just Jared, those don't seem to be on this soundtrack — unless they happen to have been given a more descriptive name than just "Cantina song." Still, that doesn't mean that the soundtrack isn't epic, or that you shouldn't be listening to it on your way to work or school as you either wait for your turn to see this perfect film, or relive the magic in your head as you let this music wash over you.

Check out the Spotify playlist below.