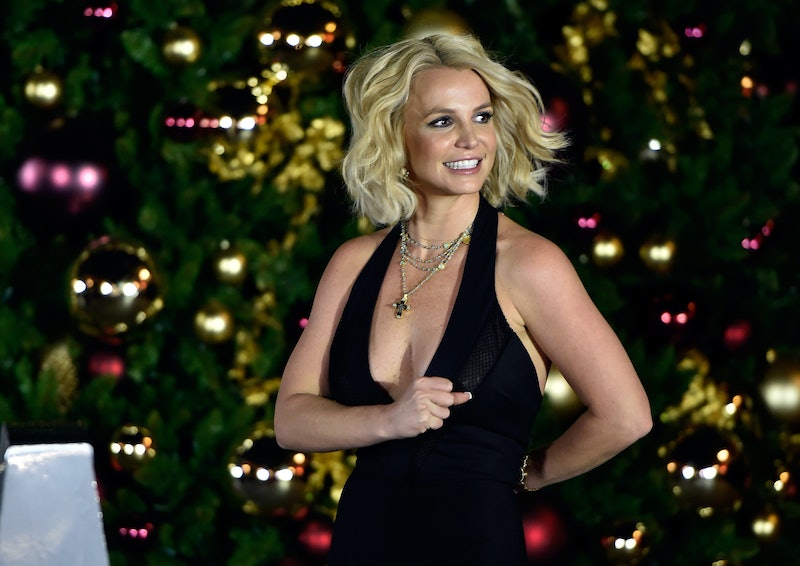 Long (and fake) hair, don't care! Even though we have been enduring a super mild fall and are going into winter with unseasonably warm temps, meaning that all of our cute jackets, scarves, gloves, and layers remain stored in the closet instead of on our bodies, Britney Spears got mega long hair extensions, noting that "long hair in winter is a must." The pop princess has an incredibly valid point, since lots of length can function like a scarf and keep the neck extra warm when it gets cold.

Don't you love it when hair acts like an accessory? Multi-functional, baby!

Brit Brit, who was recently seen with lob and who rocks the best self-referencing booties, has added lots of wavy, golden blonde extensions to her head, which frame her lovely face. Long strands are certainly versatile, since they can be worn up, down, curly, or straight. Duh! But having hair on your neck when the temperature dips means that you have added another layer of insulation and warmth. It's an added benefit of having long hair and it's one that I personally love.

Again, Spears looks amaze whether she has short hair or long and it's wonderful to see her with big hair that nods to her Southern girl roots.

That's a whole lotta hair, Brit! But she works it, wearing it off her forehead while framing her face. Let's have a look at some of the singer's hair looks of 2015.

Spears has always been a fan of the messy, casual bun piled atop her head. It's her "go to."

She was recently wobbin'... as in wearing a wavy lob.

She wore a high and glossy pony with rainbow ombre tips.

The color was sexy and cute at the same time. She was all about naked dresses in 2015, too.

Brit Brit was every inch the mermaid.

She was also a golden girl with lots of waves. Don't you love her "WTF?!" face?

Spears has been really long and assisted-by-extensions for most of 2015. In the spring, she went with majorly thick, straight locks and volume at the crown.

Spears also rocked a shaggy cut with bangs that was super chic.

It was a fun shape and length... while it lasted and before she returned to extensions.

The Holy Spearit always goes for the gold.

Her updos are always a coif "do."

And that concludes my rundown of Spears' 2015 hair looks. She ping-ponged between her lob and really long extensions, taking a few hard lefts with mermaid hues. Spears remains a source of hair inspo.

More like this
How To Master Baby Braids, According To TikTok
By Tomi Otekunrin
How To Nail The Slicked-Back Bun (AKA Summer's Easiest Hairstyle)
By Olivia Rose Ferreiro
Madelaine Petsch's Beauty Routine Is All About Carving Out "Me-Time"
By Olivia Rose Ferreiro
Zendaya's Hair Evolution, From Bobs To Box Braids
By Paris Giles
Get Even More From Bustle — Sign Up For The Newsletter